Erica has a Master of Arts in Teaching with a specialization in Elementary Education. She has experience teaching second grade and fifth grade.

Have you ever imagined taking a journey to a different country? There are many exciting countries all over the world. In this lesson, you will learn about countries in the Western Hemisphere. Updated: 12/05/2019
Create an account

Imagine you're about to eat a delicious red apple. First, you decide to cut your apple right through the middle, from the top to the bottom. Now, you have two equal pieces of the apple. This tasty treat can help you picture how the earth is divided into two equal parts, or hemispheres. An imaginary vertical line, known as the prime meridian, runs down the middle of the earth and divides it into the Eastern and Western Hemispheres. This line runs from the North Pole to the South Pole and helps us see where places are located on Earth. The Western Hemisphere is found west of the prime meridian and contains North, Central, and South America, which are full of exciting countries to explore. 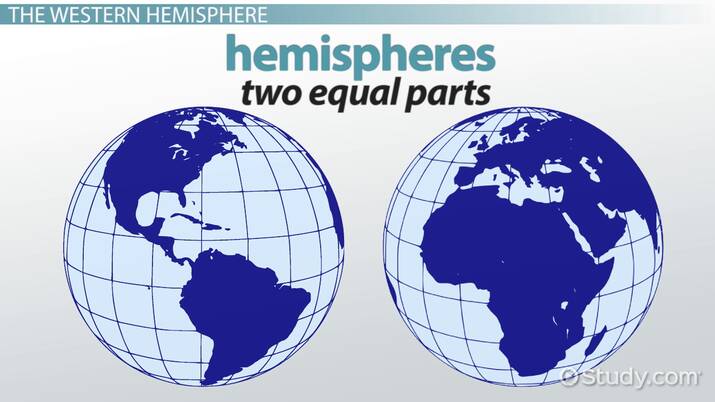 Coming up next: Western Hemisphere Lesson for Kids: Geography & Facts

With more than 20 different countries, North America is a large and lively continent in the Western Hemisphere. This is where you will find the United States of America. It is the second largest country in the Western Hemisphere and has a population of more than 300 million people. The United States also shares its borders with two other countries.

If we travel north, we will find Canada, a large country where people speak English and French. It's the largest country in the Western Hemisphere, although it has a smaller population than the United States. If we travel to the south, right below the United States, we will find ourselves in Mexico. This is a large Spanish-speaking country, where over 120 million people live and work.

On the northeast side of Canada, you will find another large country named Greenland. This is a tricky name because this country is almost covered in ice! Greenland is an island in North America, but it is partly ruled by a European country named Denmark. It has a small population of around 50,000 people.

Let's head to the central part of North America, right below Mexico. There are 7 countries located in this part of North America, and most use Spanish as their official language. They are Belize, Costa Rica, El Salvador, Guatemala, Honduras, Nicaragua, and Panama. The country of Panama is known as an isthmus because it is a bridge that connects North and South America.

Let's continue our journey through the Western Hemisphere and head to South America. There are 12 countries located in South America. They are Argentina, Bolivia, Brazil, Chile, Colombia, Ecuador, Guyana, Paraguay, Peru, Suriname, Uruguay, and Venezuela. These are mostly Spanish- speaking countries and are home to over 400 million people. Brazil, where people actually speak Portuguese more than Spanish, is the largest of all the countries in South America, and the third largest in the entire Western Hemisphere.

Earth is divided into two equal parts, or hemispheres. An imaginary vertical line known as the prime meridian runs down the middle of the earth and divides it into the Eastern and Western Hemispheres.

The Western Hemisphere is found west of the prime meridian and contains North, Central, and South America, which are home to over a billion people. The continent of North America includes Central America and the Caribbean Islands. South America has 12 countries, most of which are Spanish speaking. Our journey through the Western Hemisphere shows there are many busy and exciting countries to explore!

The Inuit & Aleut Civilizations of the Far North

The Structure of Mexico's Government

Major Landforms of Regions in Canada

Developing a Spatial Perspective in Geography

Geography of the Northeastern United States