Mark has taught graduate level political science and sociology and has a Ph.D. in International Conflict Analysis and Resolution

This lesson will discuss court packing. It will define what it is and the bill that Franklin Roosevelt used to introduce it. We will also discuss why it didn't work. Updated: 11/10/2020
Create an account

American politicians are accustomed to facing opposition to their political agendas. However, few go so far as attempting to change the fundamental structure of the American government to defeat the opposition. American President Franklin Delano Roosevelt did just that in 1937 with the introduction of the Judicial Procedures Reform Bill. The bill, frequently called the Court Packing Plan, was an attempt by President Roosevelt to manipulate the makeup of the Supreme Court to secure more favorable rulings to his domestic and economic policy agendas.

This lesson will examine why the Judicial Procedures Reform Bill of 1937 was introduced, what it attempted to accomplish, and how it was intended to work. 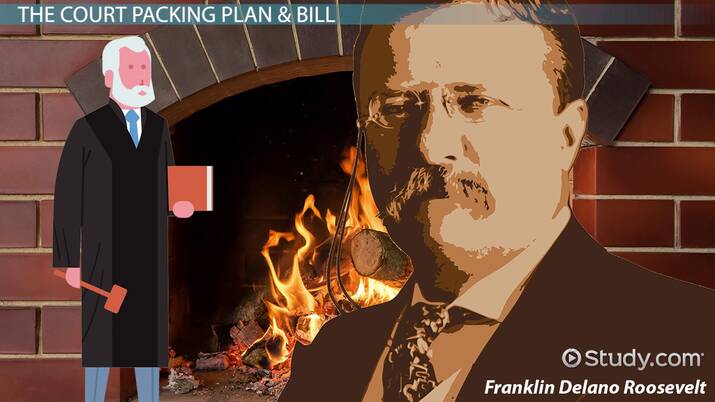 Coming up next: The Legacy of the New Deal

Franklin Delano Roosevelt became president during the height of the Great Depression. In an attempt to combat this economic disaster, which began in 1929, President Roosevelt initiated innovative legislation in an attempt to get Americans back to work. His economic recovery initiative was called the New Deal.

Normally, as is seen today in 21st-century American politics, resistance to a president's agenda is traditionally found within Congress. However, in 1937, President Roosevelt found his domestic agenda and attempts at stimulating an economic recovery thwarted not so much by Republican opposition in Congress but by the Supreme Court.

Although New Deal supporters had experienced some success to legal challenges within the Supreme Court, the Roosevelt administration remained wary of future court actions. On May 27, 1935, also known as Black Monday, the conservative-minded Supreme Court shot down three of the President's landmark economic reforms. Each was deemed unconstitutional or in violation of the tenants of the United States Constitution. The three cases that were ruled upon that day, Humphrey's Executor v. United States, Louisville Joint Stock Bank v. Radford, and Schechter Poultry Corp. v. the United States, undermined important New Deal legislation.

President Roosevelt saw these defeats, and further defeats experienced over the next two years, as personal attacks. His frustration with the Supreme Court finally led to the conclusion that if he could not win New Deal judicial challenges within the current court, he would simply change the rules.

To the American public, the Supreme Court was considered to be a hallowed institution. The court was seen as containing learned men, free of political restrictions. The public understood that the court's sole purpose was to evaluate the laws proposed by the President and Congress for their suitability to the United States Constitution.

Although Roosevelt knew he could not change the provision of lifetime appointments to the court, he believed the answer lay in diminishing the authority of the more aged members. Since the United States Constitution did not specify the number of judges that could sit upon the Supreme Court, President Roosevelt felt it was within his jurisdiction, and that of Congress, to appoint as many justices as they felt necessary.

The Court Packing Plan was Roosevelt's attempt to appoint more justices to the 9-man court intent upon getting more favorable rulings for his New Deal initiatives. The scheme was to allow the President power to appoint additional justices to the bench. It would allow Roosevelt the power to appoint new justices, up to a maximum of six, for every current justice who was over 70 1/2 years old. The plan would allow the rulings of these younger judges to take precedence over their older counterparts.

Roosevelt presented this argument to the public during his March 1937 fireside chat. He argued that since Supreme Court justices were not required to retire at any given age, the appointment of younger judges for every current justice that had served for ten years and reached the age of 70 1/2, avoided a dangerous possibility. He argued that a Supreme Court justice incapacitated by age, but refusing to retire, could taint the judicial process.

The Fate of the Bill

Although President Roosevelt's personal charm had garnered some public support initially for the Judicial Procedures Reform Bill, as the bill moved through the legislative process, public opinion turned as the intent of the bill became obvious. The bill eventually failed to gain enough congressional support for passage. The failure of the bill to become law was not a complete defeat for the President. In the coming years, the Supreme Court, seeking to stem the tide of any further presidential attempts to reform the judiciary, began to rule more favorably in New Deal judicial challenges.

President Roosevelt's longevity in office, winning four terms, provided him with an opportunity. Death and retirement opened positions on the court to appoint new justices who were more sympathetic to his domestic policies. In the end, President Roosevelt's attempt to pack the court through the Judicial Procedures Reform Bill of 1937 became unnecessary. Rather than obtaining his objectives through legislative manipulation, he did so by simply outlasting his opponents.

The Judicial Procedures Reform Bill of 1937, also known as the court-packing plan, was an attempt by President Franklin Delano Roosevelt to secure more favorable rulings from the Supreme Court for his New Deal policies, which were, in short, Roosevelt's economic recovery initiative.

The plan allowed the President to appoint six new judges for every sitting Supreme Court justice that had reached the age of 70 ½ and had served for ten years. The bill would be eventually defeated, yet the President would see more favorable outcomes in the Supreme Court due to the courts fear of further attempts of presidential reform and the death and retirement of conservative justices.

Mass Production in the 1920s

What is the Panama Canal? - History, Building & Facts

Into the Wild: Chapter 2 Summary

The Grange and the Populist Party Platform: Goals, History & Definitions