Diedra has taught college English and worked as a university writing center consultant. She has a master's degree in English.

View bio
Courtly love in the Middle Ages allowed the aristocracy to experience nonsexual romance outside the bonds of marriage. Explore how to define courtly love, how it functioned outside of marriage, its origins, characteristics, and rules, and examples from life and literature. Updated: 10/10/2021
Create an account

Love Outside of Marriage

Courtly love, also called refined love, is a confusing notion for some modern readers to understand. For most of us, love is tied up with romance and attraction. It is often publicly announced with a marriage or other public arrangement. After all, you want the person you marry to love you, right?

Courtly love, on the other hand, had nothing to do with marriage. In fact, most accounts state that it wasn't possible to experience courtly love with your spouse. This does not mean married people were excluded from courtly love; they just experienced it with someone 'outside' their marriage. The concept seems to have gotten its start in medieval literature, but it eventually caught on in the royal courts.

Here's the part that gets confusing for modern readers: courtly love was all about romance (the cheesier the better), but sexual contact typically had nothing to do with it. Most of us consider sexual acts to be something shared between lovers. But at medieval court, the term 'lover' referred to the person with whom someone danced, giggled, and held hands; procreation was a spousal duty. To do otherwise was to break the rules of etiquette. However, we all know that rules wouldn't be in place unless people were breaking them.

In the Middle Ages, why did love and marriage have nothing to do with each other? At the time, noble marriages were often arranged by the parents in order to increase the status and wealth of each family. They were about political and financial gain, rather than how the couple felt about each other. Once a strategic marriage was arranged and consummated, courtly love brought romance into the courts and people's lives without vows of fidelity being broken. 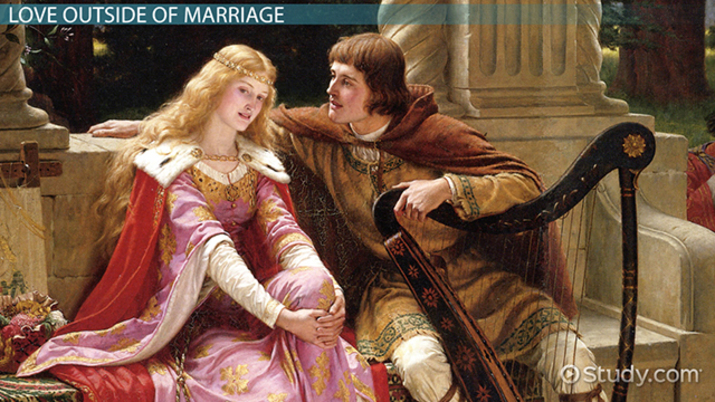 Coming up next: Duke of Albany in Shakespeare's King Lear: Traits & Analysis

Courtly love was strongly related to chivalry (the practice of being a loyal and gentlemanly knight) and what would later be known as the Code of Chivalry. There was no official 'code' in medieval times; it was a term that was coined in later years to describe the common behavioral attributes that proper knights possessed not only on the fields of battle, but in court, too. Nowadays, the term is primarily used to describe the ways knights were expected to behave towards ladies of nobility; they did not apply to peasant women.

The conventions of courtly love were often passed on in poetic narratives told by troubadours. Troubadours were traveling poets, but not like minstrels or bards. They would often stay in one place for longer periods of time, entertaining the nobility in an area under the patronage of a wealthy member of the aristocracy. The troubadour (like a popular singer going on tour) would visit at various courts and tell or sing his romantic poetry, in which the woman was elevated to a status that allowed her to raise up a man and make him a better person.

Medieval literature includes several examples of courtly love. Sir Lancelot expresses this kind of love for Lady Guinevere in Arthurian legend, though he breaks the rules and takes Guinevere for his own. In Geoffrey Chaucer's The Knight's Tale, this type of love is depicted. Many poets also dedicated their writing to noble ladies in acts of courtly love, such as Edmund Spenser's The Faerie Queene, which he dedicated to Queen Elizabeth I. The poem depicts the Redcrosse knight's courtly love for the Lady Una. He protects her and professes to love her, while always behaving with the most chivalrous propriety.

A chaplain by the name of Andreas Capellanus wrote a set of rules in the 12th century called The Art of Courtly Love. Scholars previously considered his work to be a treatise, but it has since been recognized by others as a satire that made fun of the acts and literature of courtly love. Some still debate the sincerity of the piece, but even those who acknowledge its satirical tone acknowledge it was a work to describe common customs of the times.

The work is large and can be divided into three units or books. The following rules are found in Book Two, or How Love May be Retained.

At the book's conclusion is a piece of advice that no doubt is a claim of satire; Capellanus advises that men should never fall in love with women (because of women's numerous flaws) and that a man should trample all over the previously mentioned rules.

The extent to which courtly love was actually practiced by nobility in the Middle Ages is debated. What we know for sure is that the literature of the period depicts a chivalrous devotion to a woman's ability to uplift a man's spirits. In many of these tales, the brave knight is willing to do anything (go on a ten-year quest, battle an entire army, or outsmart the devil himself) for the smallest token from his lady.

Nowadays, courtly love narratives can be compared to modern romance novels. While many of the stories of medieval times revolved around battles and tales of great warriors with few female characters, troubadours' tales of courtly love put women in the forefront and gave these ladies the power of the tale, as men did anything to earn their favor.

Courtly love, also called refined love, refers to a romantic relationship between two unmarried people in medieval times. These love relationships were not physical, but based on flirting, dancing, and the chivalrous efforts of knights and other noble young men to curry favor from ladies at court.

Chivalry refers to the behaviors associated with being a loyal and gentlemanly knight. Chivalry was tied strongly to courtly love, as both were practices of knights and other wealthy, aristocratic men found in royal courts. Tales of courtly love were spread primarily by troubadours, well-respected, traveling artists who wrote and performed poetry, often through song.

Courtly love in literature was a sharp contrast to more traditional tales of battle. Rather than excluding female characters from positions of importance, they gave narrative power to the ladies as the men in the stories bent over backwards to earn their favor.

Troubadours served an interesting role in society in the Middle Ages. Why do you think that troubadours were so popular? What purpose did they serve? Do we have any equivalent modern-day troubadours? If so, who is a good example of one? Write two to three paragraphs addressing this topic and explaining your opinions.

The lesson has a section on the 'Rules of Courtly Love' containing five rules. For this assignment, choose three of the rules that you find most interesting. In three paragraphs (one paragraph per rule), discuss points of interest for each rule. For example, summarize the rule, state whether you agree or disagree with it, provide reasons why you agree or disagree, and give examples of it from current movies, literature, or your own life. Conclude the paper with a paragraph discussing how the rules of love have or have not changed since the Middle Ages.

Chivalry in The Canterbury Tales

The Evolution of Language in Ancient Civilizations

The Adventure of the Solitary Cyclist: Plot Summary & Analysis