The dual monarchy of Austria-Hungary was created due to compromises made between the two states, one of which included Hungary's independence. Study the history of the creation of Austria-Hungary, the 'Ausgleich,' and the impact of this creation. Updated: 09/28/2021
Create an account

High school can be a rough time in a kid's life. Friends are made, cliques are formed, and exclusionary games can be played by the meaner members of a group. In the scramble to unite the German lands in the mid-19th century, Austria got forced out of any resulting German state after a war with Prussia in 1866. Just like a spurned group member in high school, it was forced to form its own.

Austria had been a member state of the Holy Roman Empire for centuries. By the beginning of the early modern period, the Austrian ruling family, the Hapsburgs, traditionally controlled the imperial throne. After the Thirty Years' War ended in 1648, the emperorship lost most of its traditional power over the affairs of other German states, and, in turn, the Austrian Hapsburgs began to focus on exerting control over the territory it directly controlled in South-Central Europe. By the beginning of the 18th century, Austria controlled much of its surrounding territory, including Silesia, Bohemia, and parts of Hungary.

In the 18th century, as the influence of the Holy Roman Empire continued to wane, Austria's power in Central Europe rose in tandem with the power of a northern German state, Prussia. In fact, the two burgeoning German countries fought two wars in the middle of the 18th century, the War of the Austrian Succession and the Seven Years' War, in which Austria lost Silesia to Prussia.

The two states were both defeated and conquered by Napoleon in the early 19th century, and after Napoleon's defeat were the two principal powers of the German Confederation that was formed in 1815. Austria and Prussia vied for control of the loosely-affiliated confederation. In 1866, Prussia refused Austrian troops entry to cross Prussian territory, and Prussia subsequently declared war on Austria. Despite having the support of most of the Confederation, Austria was soundly defeated by the better trained and better equipped Prussian military. As a result, Prussia formed a new German Confederation that specially excluded territories directly ruled by Austria. 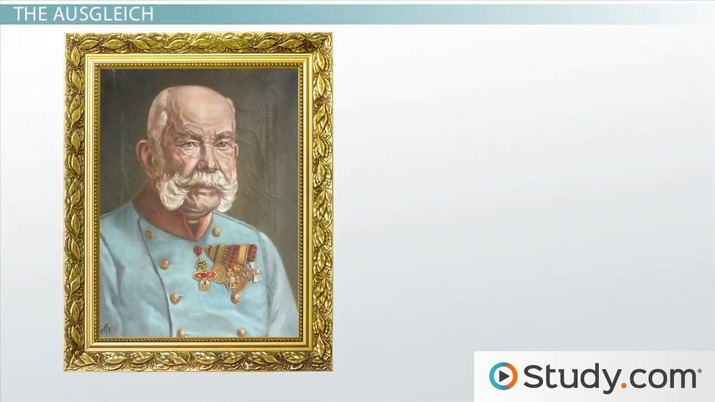 Coming up next: Reforms in Russia Under Tsar Alexander II: Examples & Impact

Exclusion from the now Prussia-controlled German Confederation left Austria in economic and political crisis. As a result, it turned to consolidate power in its territories held outside the reach of the soon-to-be-united Germany. Austria had controlled parts of Hungary since Austria's rise to regional prominence in the 17th century, and those parts had been a continual source of intermittent rebellion against the Austrian monarchy.

Instead of opting for a costly campaign that would have further reduced the already ailing Austrian treasury, the Austrian Emperor, Francis Joseph, chose to negotiate with the Magyar families that had traditionally ruled Hungarian lands. In 1867, the two parties signed the Ausgleich - literally, the 'Compromise' - which acknowledged the Austrian Emperor Francis Joseph as King of Hungary and granted him control of all of the territory in the Balkans and Eastern Europe under Hungarian control.

In return for being proclaimed King of Hungary, Francis Joseph was forced to make radical reforms to the Austrian government. Francis Joseph agreed to not implement any new laws amending the basic Austrian constitution without first consulting the Austrian representative assembly, the Reichsrat. Furthermore, rather than forcing Hungary to send representatives to the Reichsrat, Francis Joseph instead granted Hungary greater control over its own affairs, allowing the region to have its own Parliament that was not beholden to anything the Central Austrian Parliament decided. Indeed, the new empire of Austria-Hungary was only united dynastically, in matters of war and foreign policy.

Other concessions were made to appease the liberals in the Austrian Reichsrat who opposed the creation of the dual monarchy. Freedom of religion, access to primary education, and a modicum of other personal freedoms were granted, and the protection from persecution of Hungary's German-speaking minority was secured.

Perhaps the most important effect that the creation of the dual monarchy of Austria-Hungary had was the quelling of unrest in Austria's Hungarian possessions for at least a few decades. Indeed, Hungary had been a continual source of internal insurrection in Hapsburg lands since it first gained territory in Hungary in the late Medieval period. Furthermore, the creation of the monarchy brought even more territory under control of the Austrian crown; thereby giving the new empire greater military might and increased international influence.

Austria-Hungary was created due to several developments of the mid-19th century. Austria's defeat at Prussian hands in 1866 forced Austria out of the resultant German state - a political entity Austria had been a key member of in its various forms for centuries. Naturally, Austria still wished to maintain its status as an international player, so it looked elsewhere for the requisite power. Additionally, the Hungarians gained autonomy in internal affairs, something for which they had been intermittently fighting the Austrians since Austria first acquired portions of Hungarian territory. The situation was a win-win for both sides, giving Hungary the independence it sought, while also giving it and Austria a seat at the international table.

The Rise of Austria & Strengthening of the Hapsburg Monarchy

Revolutions of 1848 & Spring of Nations | History, Cause & Effect

British Industrial Revolution | Why was Great Britain the First to Industrialize?

Jacobins in the French Revolution | Leader of the Jacobins

Stalin's Five-Year Plan for Russia | What is Collectivization?

Unification of Germany Summary & Timeline | When was Germany Unified?