What do you do when you need to get your creative juices flowing? Do you brainstorm new thoughts or ideas with a friend or co-worker? Maybe you give yourself a period of time to decompress and wait for creative inspiration to strike. Or, do you immerse yourself in the area of knowledge where creativity is needed?

Would you believe that most people engage in some degree of all of those things? It's part of a way of thinking popularized by the English social psychologist Graham Wallas, the co-founder of the London School of Economics. He defined what he believed to be stages of the creative process based on his own observations and what he had learned about famous inventors and intellectuals.

The creative process is both easy and hard to define: Easy because it simply refers to the way in which people come up with new ideas or solutions for problems, and difficult because that process is a somewhat different one for each person. What we do know, according to Wallas and others who have studied the creative process, is that it includes five definable stages. 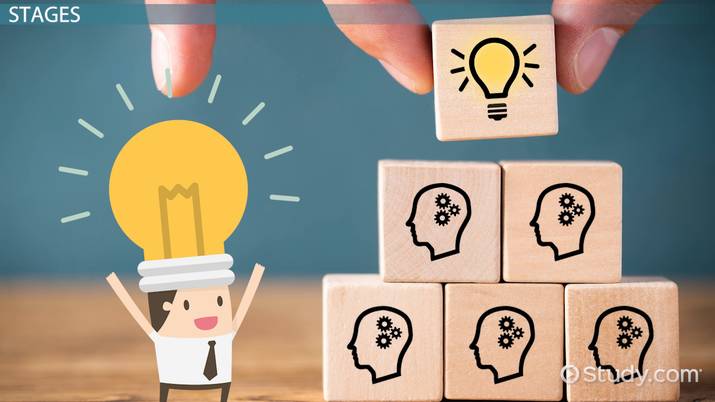 Try it now
Back
Coming up next: Facilitating the Individual Creative Process in the Workplace

Part conscious and part unconscious thought, the creative process can be broken down into five key stages, including: preparation, incubation, illumination, evaluation, and implementation.

Preparation is the ground floor of the creative process, the foundation on which all the other stages are built. It begins when a problem is identified, a need is realized, or a solution is necessary. Preparation is the working stage, during which where you conduct research and gather information, laying the groundwork for creative success. It also serves as a planning stage as you prepare for the new idea or project to come.

In the workplace, preparation might start with a marketing strategist looking at market research before designing a new advertising campaign or a computer programmer tinkering with code. It might look like an editor reading books about a local town in preparation for a special section in a newspaper. It could even be a manager pulling data from previous team projects in preparation for a new project.

The incubation stage is like that walk around the block that you take when you need to get away from your desk and clear your mind. Incubation gives you time to reflect upon the preparation stage and the information you've gathered, a process that may be both conscious and subconscious. Think about an incubator in a hospital's neonatal intensive care unit that gives premature babies extra time to develop and grow. This is what the incubation stage does in the creative process, and it can take just a few minutes, hours, days, or even weeks.

At work, the incubation stage on a project might come after the first team meeting when a manager asks everyone to mull over ideas for the next meeting or for the project as a whole. After taking that directive back to your desk, you continue thinking about it, even as you're working on other tasks, jotting down ideas as they come to you throughout the next week.

The illumination stage is aptly named because it can be like a light bulb coming on. During the illumination stage, the work you did during the preparation stage and the ideas that have been incubating come together in a cohesive thought or plan. This is the time when everything you've worked toward up to this point falls into alignment. Typically, Illumination occurs subconsciously, for example while you're driving home from work or taking your morning shower.

Illumination is hard to predict because it can happen anywhere at any time. For instance, you may be cleaning up after your organization's big annual meeting when a colleague makes a statement that gives you an idea for next year's meeting theme.

The evaluation stage of the creative process takes place either the end of the project or prior to its implementation. At the end of a project, it gives you an opportunity to determine if your ideas were successful at achieving what you set out to accomplish. For example, did the creative concept you came up with satisfy the client? This is a time for reflecting on what went wrong and what went right, and for thinking critically about the creative process.

When the evaluation stage takes place before implementation, it can help to determine whether a creative idea is worth pursuing and if it will provide a valid solution, or if employees need to go back to the drawing board. Illumination may not always lead to a tidy outcome or workable implementation based on your preparation.

The implementation stage is when the foundation, incubation, and illumination stages that have helped to develop an idea are put into functional practice. Here, you're putting all the pieces together and transforming them into a final product, or reality.

Implementation at work might take place when a graphic designer creates a logo for a new event, a team arrives at a venue to set up for a conference, or a web designer launches a new site.

The creative process refers to the way in which people come up with new ideas or solutions for problems. Researchers have determined that most people go through a series of five stages - both conscious and subconscious - as they move through the creative process. The first stage, preparation, lays the foundation for a product or project through research and information gathering. The second stage, incubation, is where you reflect upon the preparation stage and allow the creative process to flourish. The illumination stage is the ''light bulb'' moment, when the preparation and reflection stages culminate in a cohesive idea, followed by implementation of the final product or project. The evaluation stage can take place after or before implementing a product or project to ensure the original idea is a good fit or solution.

Managing Business in a Global Environment

Unconscious Bias & Microaggressions in the Workplace