The post-trial steps consist of motions, or requests of the judge, sentencing, or the enactment of the punishment, and appeals, or reviews of the court proceedings. Learn how these processes are conducted in the events immediately following a criminal trial. Updated: 10/20/2021
Create an account 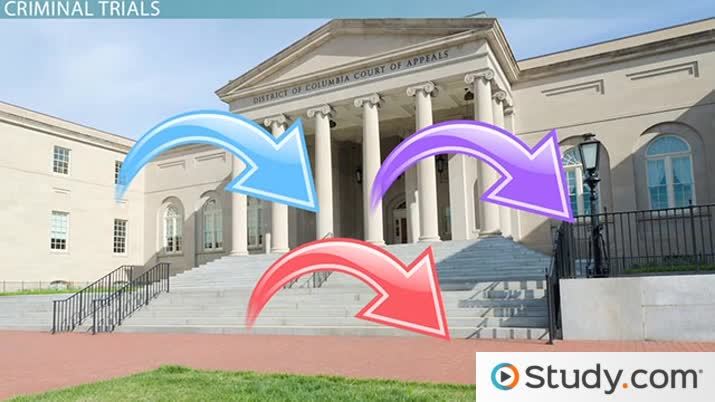 Coming up next: Types & Goals of Contemporary Criminal Sentencing

Motions are pleadings filed with the court before, during or after a trial asking for a hearing or a ruling on something relevant to the case. Motions are typically filed by one party, and then the other side is given a few weeks to file their own response on how they think the court should rule on the motion. Then, it is set before the court for arguments.

Post-trial, there are several different motions that may be filed. The first is called a motion for a new trial. The motion asks the judge to vacate, or dismiss, the verdict and allow a new trial. This rarely - if ever - is granted unless the interests of justice require it. An example of when a motion for a new trial is granted is if important evidence is admitted or excluded incorrectly or the jury was not instructed properly.

A second motion that may be filed post-trial is a motion for judgment of acquittal. This motion asks the judge to set aside a jury's verdict and allow a defendant to go free. This motion is made on the grounds that the jury could not reasonably have reached a guilty verdict. One example of when a motion of this type would be considered would be if a jury found a defendant guilty of murder. Upon review of the evidence, there was little to no evidence to link this particular defendant to the crime and, despite the evidence being lacking, the jury found the defendant guilty anyway. It would be in a circumstance such as this that the filing for a motion for judgment of acquittal be considered.

A third motion that may be filed post-trial is a motion to vacate, set aside or correct a sentence. A motion of this type is usually made due to a monumental or incorrect error being made in sentencing. An example of when a motion of this type would be made is in the case of a defendant receiving probation on a case when the crime he was charged with actually carried mandatory prison time.

A few days or a few months post-trial, a defendant will appear in front of the judge again for sentencing. During sentencing, the defendant will find out what his punishment will be for the crime of which he was found guilty. The judge looks at information from several different sources in determining what a sentence will be. After a defendant is found guilty, he reports for a pre-sentence investigative report. This report reviews the defendant's criminal, educational and psychological background, his current situation, the facts of the case and the victim's wishes and makes a recommendation to the judge for sentencing.

On appeal, the prosecutor and the defendant each file a lengthy brief laying out the arguments, responses and legal theories that support the claims made by each side. Then, if the appellate court decides to hear verbal arguments on those briefs, then each side has a set length of time to argue their thoughts in front of the appellate court. During those arguments, the judges on the appellate court (the number of judges varies state to state), may ask the attorney questions about their opinions. Then, after reviewing the briefs and hearing the arguments, the court will make their decision. In some cases, decisions of the trial court are reversed. In other cases, they are allowed to stand.

You will have the ability to do the following after watching this video lesson:

Civil Case Types & Examples | What is a Civil Court?

Principle of Unity Of Direction: Overview

What is Anecdotal Evidence? | Examples