Experts believe that the best time in a person's life to learn a new language is during the first few years of life, also known as the critical period. Learn how this hypothesis was formed and understand the factors that affect language acquisition. Updated: 12/06/2021
Create an account

What Is the Critical Period Hypothesis?

Has someone ever said to you that you're too old to learn a new language? If so, this person was hinting at the main point of the critical period hypothesis, which argues that there is an ideal period for acquiring languages. A hypothesis is simply a proposed explanation made by a scientist, which can then be tested. Basically, the critical period links language acquisition to age.

This means that once we hit a certain age, our ability to learn our own language is greatly diminished. Although the original hypothesis was developed to understand how babies learn their first language, researchers have also extended the concept to study the best times for people to learn a new language.

The critical period, according to this theory, is the first few years of a person's life. So, assuming you are presented with the appropriate stimuli, you will be much more likely to learn a language when you're 3 than when you are 30!

As you get older, you will have a hard time with new languages, especially their grammatical systems, or the set of rules that all languages have, such as the order of nouns and verbs in a sentence. You might also have a hard time mastering an accent that sounds close to a native speaker. 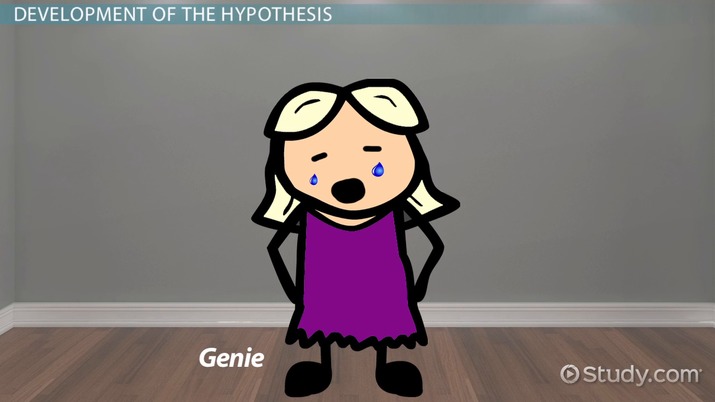 Development of the Hypothesis

The neurosurgeon Wilder Penfield was one of the earliest champions of the critical period, believing that children up to 9 years old are quite capable of learning a second language.

So, why can't older people learn languages as easily? The evidence for the critical period comes from a few places. First, there is something called neuroplasticity, which basically refers to how your brain changes and adapts as you grow. What does this have to do with learning a language? Basically, as you get older, your brain is less 'flexible.' This makes learning something very challenging, like a language, quite difficult. A child's brain can more easily adapt to new information.

Researchers have pointed to examples where children are deprived of the stimuli needed to acquire a language. An oft-cited example is the Genie case. Genie was an abused and neglected child who was locked in a room until she reached puberty. When she was discovered, she was unsocialized and could not speak. Eventually, she learned to speak a little bit but she was never able to master her language fully.

Today, some scientists believe that the critical period hypothesis might not be completely accurate and it remains a hotly debated theory in the field of linguistics. For example, some researchers, such as David Singleton, note that as many as 5% of bilingual people learned their second language as an adult, well after the critical period supposedly ends.

It is now argued that there are probably many factors related to learning a second language, including social factors, environment, and personal motivation. This is not really accounted for in the critical period hypothesis. So, one might question whether Genie never learned to speak because she passed the critical period or because her environment was so terrible.

The critical period hypothesis is a theory in linguistics that suggests we all have a fairly short window to learn languages. It argues that because of our brain's plasticity, it becomes harder to learn language as an adult because our brains are less flexible than a child's.

However, more recent evidence points out that there could be many other reasons for language acquisition, such as social or environmental context. So, don't worry if you're past the critical period and trying to learn a new language. There might still be a chance for you!