View bio
Financial resources are limited, and there isn't always enough to go around. In this lesson, you'll learn about the economic concept of crowding out, including what it is and its effect. A short quiz follows the lesson.
Create an account

Definition of Crowding Out

Crowding out is a situation where personal consumption of goods and services and investments by business are reduced because of increases in government spending and deficit financing sucking up available financial resources and raising interest rates. Crowding out can be caused by an expansionary fiscal policy financed by increased taxes, borrowing, or both. Let's look at this in a bit more detail. 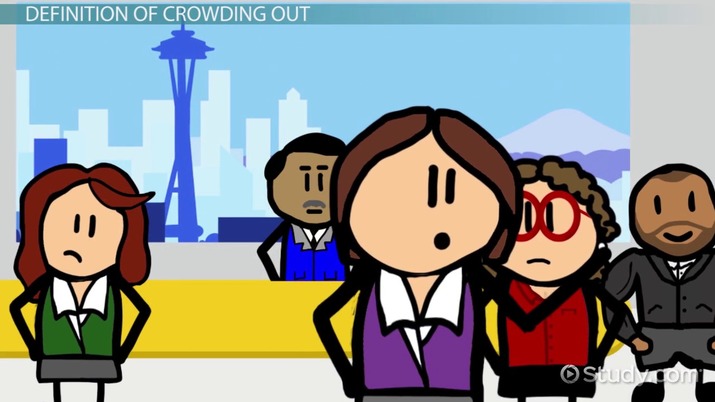 Effects of Crowding Out

The problem may be compounded if the government finances its spending through borrowing. The sheer size of a government's borrowing may create upward pressure on interest rates as the private sector and public sector compete for loans. This will make financing more expensive, which will have a negative effect on private economic growth. If it costs too much to obtain financing, individuals will decide not to purchase and businesses will decide not to invest.

The combination of the first two problems leads to the overarching problem with economic crowding out—dependency on government spending for economic stability and growth. If government spending takes up a sufficient amount of financial resources and constitutes a sufficient amount of the overall consumption and investment in a country, then the country's economy may become dependent upon it. The United States government, for example, spends trillions of dollars a year. What do you think would happen to the U.S. economy if the United States stopped spending tomorrow?

Crowding out is an economic concept that describes a situation where personal consumption of goods and services and investments by business are reduced because of increases in government spending and deficit financing sucking up available financial resources and raising interest rates. The costs of resources and interests rates increase as the private sector competes with the public sector for the resources and financing. If public sector spending becomes significant enough, a country's economy may become dependent upon government spending to maintain economic stability and growth.

Consider the four examples below. For each of the examples, determine if "crowding out" is occurring. If the situation being discussed does not describe crowd out, explain why this isn't the case. If, on the other hand, the situation does describes crowd out, explain the private party (or parties) that is (are) being negatively impacted by government spending.

Arrow's Impossibility Theorem & Its Use in Voting

Real vs. Nominal Interest Rates and Changes in Prices

Factors That Shift the Phillips Curve

How Real GDP per Capita Affects the Standard of Living