The crystal habit, or the external shape of a crystal, can be used to help identify minerals. Discover the different types of crystals, including euhedral and non-geometric, and their different habit forms. Updated: 09/18/2021
Create an account

Crystals have amazed us throughout history. For example, the crystal structure of a diamond reflects light in such a way to mesmerize even the harshest critic. But what is a crystal? The term crystal is used to convey different meanings at the microscopic or macroscopic level.

At the microscopic level, a crystal is a solid formed by regularly-repeating patterns of molecules that are connected together. Now, not all solids are crystals. In a non-crystal solid, the arrangement of the molecules is random throughout the material; it's not regular. Still, at the microscopic level, the crystal is characterized by the unit cell, which is a collection of molecules repeated in exactly the same arrangement throughout the entire material.

At the macroscopic level, geologists use the term crystal shape, or crystal habit, to refer to the visible external shape of a sample of a material. The shape or habit results from the common or characteristic shape of either a single crystal or aggregate of crystals. In this lesson, we will discuss two general types of crystal habits. The first exists as regular polygons and are thus termed euhedral, where 'eu' means true. The second type doesn't exist in regular geometric forms. 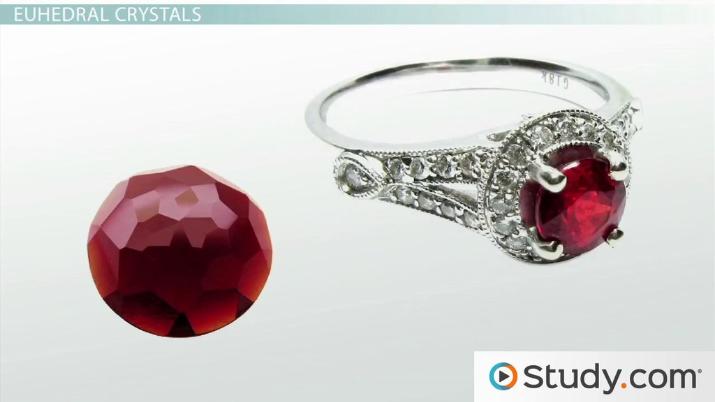 Try it now
Back
Coming up next: Mineral Strength: Tenacity, Hardness, Cleavage & Fracture

Garnets are most commonly dodecahedrons as they are 12-sided. Many gemstones are garnet minerals and some are quite valuable rubies. Some minerals form a cubic, or a cube-shaped habit, such as halite, galena, and pyrite. Halite is nothing more than common rock salt, galena is the natural mineral form of lead, and pyrite, or iron pyrite, is also known as fool's gold, as it has a shiny metallic luster much like gold.

It is important to note that while most minerals have one common crystal habit or crystal shape, some can form different habits depending on the conditions in which they are formed.

Now let's move on to the crystal habits that don't have a regular geometric shape. Some minerals rarely develop perfect geometric forms at the surface. However, other characteristics can be helpful in identification of these minerals. For example, kyanite has a bladed habit, as its crystals are elongated and flattened in one direction, much like the blade of a knife.

Tourmaline has a prismatic, or prism-like habit, as the crystals are prism-like; that is, elongated but not flattened. Still, other minerals are banded, as they have stripes or bands of different colors or different textures. Rhodochrosite is a banded mineral as it has characteristic layered texture and color. Hematite forms an interesting botryoidal habit that resembles a cluster of grapes.

In summary, the habit, or visible shape of a crystal, is a physical property that can be used to help identify the mineral. Some crystals are euhedral as they have a regular, polygonal structure. Euhedral habits include octahedral, such as diamonds, dodecahedral, such as garnets, and cubic, such as halite and galena.

Non-geometric habits include bladed, such as kyanite, prismatic, such as tourmaline, banded, such as rhodochrosite, and botryoidal, such as hematite. It should be noted that some minerals can exist in different crystal habits depending on the conditions under which they are formed.

After viewing this video, you should be able to:

Accretion Theory & Process | What is the Process of Accretion?