If you spend a day in, let's say New York City, it wouldn't take long to come to the conclusion that people are really different. From the way we dress to the way we talk, we're different; as the old saying goes, there is 'different strokes for different folks.' However, if you looked a bit closer, you'd also realize there's a whole lot we have in common. The people you see might not be dressed alike, but I bet many of them will be talking to friends or walking alongside a spouse or children. To use another proverb, in some ways we're all sort of peas from the same pod.

Despite the triteness of these axioms, anthropologists would tend to agree with them. They'd give a nod to the fact that societies across the globe are very different, yet they'd also agree that all humans seem to share some similar cultural traits. However, rather than using pithy sayings, they'd probably explain this concept by using the terms universals, generalities, and particularities. Today's lesson will seek to explain these three terms. However, before we do this, we should probably nail down the definition of culture since we'll be using the term a whole bunch.

Culture is the set of learned behaviors, attitudes, and beliefs that characterize a society or a people group. It encompasses both the intangible and tangible things of a population. Things like how they worship, how they structure their families, how they work, and even how they play are all a part of a people group's culture. With this down, let's get onto our three terms and how they help explain why we are all both alike and different. 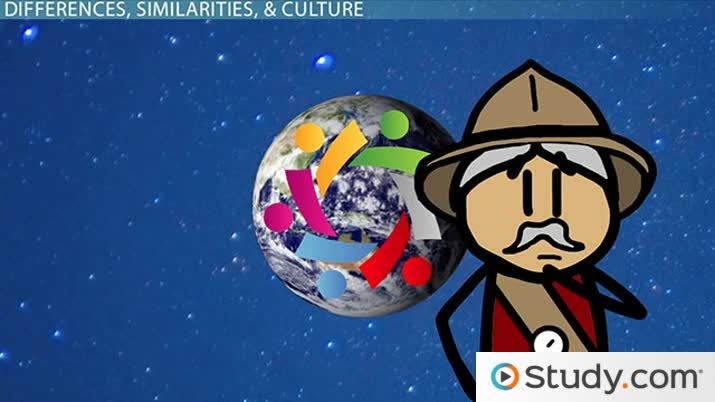 Try it now
Back
Coming up next: Etic and Emic World Views in Anthropology

Since it's the broadest of the terms, we'll start with universals. Universals are cultural traits that span across all cultures. In other words, they're the beliefs or attitudes that are present around the globe. Across all continents they are seen as acceptable, if not necessary, for culture to survive.

A great example of a universal that anthropologists like to cite is the idea of family. Across the globe and throughout time, people have organized themselves into families and kinship groups. Whether in Africa or Asia, Australia, or Antarctica, people understand the universal concept of family. Anthropologists would argue that it's just what we as humans do - we organize ourselves into families that are based on biology. No matter where you choose to travel and explore, you'll find a family system.

A step down from universals are generalities. Generalities are cultural traits that occur in many societies but not all of them. Yes, they might be prevalent, but not everyone sees them as acceptable and necessary. For this one, we can, again, use the concept of family.

Like we said before, the concept of family is very much a universal. However, that doesn't mean that all families look the same. For instance, the idea of a dad, mom, and kids living together under one roof has historically been what Western minds have tended to think of when the word 'nuclear family' is used. We'd be pretty safe calling it a cultural generality that has existed in the Westernized worlds of say, England, France, and the U.S.

However, young children growing up in an African tribe where polygamy is practiced would have a very different idea of family. To them, family would not just mean one dad and one mom, nor would it mean siblings who share the very same genetic traits. Yes, they'd understand the universal concept of family, but the generalized concept of a nuclear family would be a bit outside their paradigm.

This brings us to our last term, particularities. Particularities are cultural traits that are not prevalent but are instead confined to a single place or culture. To keep things simple and to help them stick, we'll, again, use the concept of family. Like we've already nailed down, the concept of family is universal. Across all cultures, you'll find families. However, all families do not look the same. This is where generalities, like nuclear families, come into play. Now, when speaking of particularities, our scope really needs to narrow. For this one, I'll use my family.

Like the rest of the world, I belong to a family. Also, like most Westerners, my family started out as a nuclear one, and when I was a young girl, my family moved from the South to the North. Now, our new neighborhood had a very high concentration of German-descended families. However, they were still what the West would tend to call traditional families; we shared that cultural generality.

However, because my parents were from the South with no German heritage at all, we definitely had some cultural particularities that made us stick out. For instance, we noticed that while our family tended to eat more poultry, seafood, and garden vegetables, our very German neighbors tended to bring beef and potato dishes to picnics. While we called fizzy carbonated beverages cola, they called them soda. Also, our new neighbors said 'yous' when speaking to us. As in, 'Where are yous from?' This was more than odd to our ears, which had grown up hearing 'y'all' or simply 'you.'

Not only were our choices of words different, the way we actually spoke made us stand out. As Southerners, we tended to draw out our words, in almost a sing-songy manner. This was in sharp contrast to our new German friends, who used short, almost staccato-like tones. Yes, we all shared the universal idea of family, and many of us shared the generality of the nuclear family. However, when it came to what we ate and how we treated the English language, these cultural particularities made us feel like we had entered a completely different world.

Once you finish the video, you should find it easier to:

Hypodescent Overview & Rule | What is Hypodescent?

Anthropology Field of Study: Overview & Subfields | What is Anthropology?

Hypodescent Overview & Rule | What is Hypodescent?

Anthropology Field of Study: Overview & Subfields | What is Anthropology?