Central America, the land connecting North and South America, was subjected to European colonization of the native populations, leaving trends of economic and political instability. Explore the historical, cultural, and political contexts of Central America. Updated: 11/08/2021
Create an account

We've all heard the saying, 'To make a long story short…' It's a popular one. Today I'm going to employ it for our lesson on the history, culture, and politics of Central America. Covering so much information in so little time will definitely force us to make a long story short. For this reason, we're going to stick to a quick survey of such a deep well of material.

Before we begin, let's locate Central America on our globe.

Central America is the isthmus that connects North America to South America. An isthmus is a narrow strip of land, surrounded by sea, which connects two larger landmasses.

are the countries of Central America. 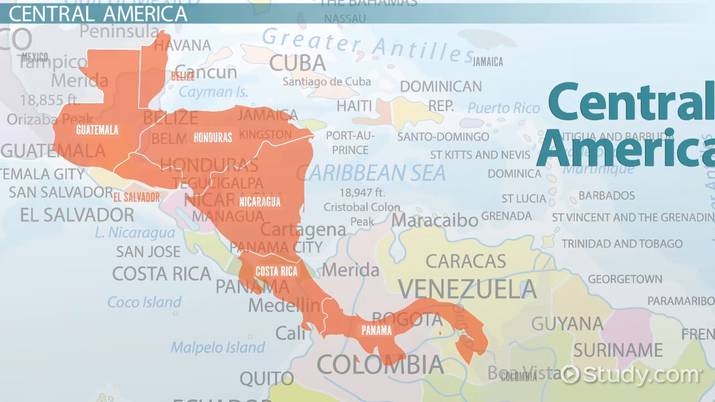 Coming up next: Culture, History & Politics of Mexico

Although it took some time, the early 19th century saw Central America pushing for freedom from Europe. Although the region eventually gained it, European influence is still stamped all over Central American culture.

Firmly linked to its history of colonization, Central American culture still speaks of Europe. Yes, each country does have its own flavor, but there are some generalizations we can make. For instance, Spanish is the dominant language of the region. Standing out a bit, Belize actually claims English as its official language, but this too speaks of European influence. After all, before the Europeans made shore, the ancient Mayans weren't greeting each other with hellos or holas! Adding to the evidence of Europe's influence on Central American culture, Catholicism is the dominant religion of Central America.

Moving away from the cultural European influence, let's talk about the economic situation of Central America. In fact, the region is considered part of the developing world. This means it is a region of an industry that is in its growing process, struggling economies, and poor living conditions in some areas. With many of its inhabitants struggling to survive, most of Central America has very low literacy rates and short life spans for its people. Of all the Central American countries, Nicaragua is usually considered the least developed.

As for the most developed, let's briefly talk about Costa Rica and Panama. Costa Rica is an exceptional country in Central America as its priority is the conservation of its natural land with its biodiversity and amazing landscapes, such as volcanoes. For this reason, eco-tourism is the main source of income in Costa Rica. Also, Costa Rica abolished its army back in 1949 as a way to prevent it from over-throwing the government as it had happened before. The consequences have been interesting because the state budget, previously used to support the army, is now destined to enhance educational and health programs, bringing up literacy rates and life expectancy.

Regarding Panama, international commerce is big in this country and its economy has benefited a lot from the trades done through the Panama Canal, which is also a major tourist attraction.

One last interesting fact: many Americans retire in Central American countries to enjoy the weather and the low to moderate cost of living.

Many link Central America's poor economic status to its political instability. Since gaining independence, most of the countries have been plagued by upheaval. This was especially true during the latter half of the 20th century. During this time, the region was stuck in a tug of war between the U.S. and communism. Known as the Cold War, a time of political hostility between the U.S. and the Soviet Union, the U.S. fought to keep Soviet influence out of the region while those in favor of communism sought to bring it in. This controversy led to battles, revolutions, and all out wars that devastated the region. Places like Nicaragua and Guatemala are still suffering in the Cold War's wake.

Despite this, most of the modern day Central America claims democracy. However, due to its dependence on foreign money, the region is still heavily influenced by outsiders. Adding to its woes, much of the region stakes its survival on the exportation of agricultural products, specifically coffee or bananas. This has earned several countries in the region the political nickname 'banana republics.' This means they are small nations dependent on one crop and the inflow of foreign money. Due to this precarious economic position, they are very dependent on other countries for their survival. In other words, many believe Central America's political workings are still being pulled by outside strings. Being more specific, some would say by American strings.

Central America is the isthmus that connects North America to South America. An isthmus is a narrow strip of land, surrounded by sea, which connects two larger landmasses. The countries of Central America are:

Historically, Central America has struggled with poverty and political instability. It is considered part of the developing world. It is a region of an industry that is in its growing process, struggling economies, and poor living conditions in some areas. Its political climate is still being impacted by the Cold War, a time of political hostility between the U.S. and the Soviet Union. As the U.S. tried to keep communism out of the region, groups tied to the Soviet Union tried to bring it in. This led to years of political instability, bloodshed, and war. Today most of the region claims democracy. However, due to their poor economies, many of the countries are considered 'banana republics,' small nations dependent on one crop and the inflow of foreign money.

Which of these conflicts has had a huge impact on Central American politics?

The Distribution of Plants & Animals in the Caribbean, Central & South America

Balkan Peninsula Conflict | What are the Balkan States?

The Environment's Effect on Human Activities in North America