Shelby has a BS in Animal Science and a MS in Agriculture and Natural Resources. She taught high school and college animal science and biology courses for over 5 years.

View bio
In this lesson, learn about the life and accomplishments of Indian physicist C.V. Raman. Raman is best known for the Raman effect and for being the first Asian to win the Nobel Prize in physics. Updated: 01/13/2020
Create an account

Born in 1888 into an academically minded family in India, Chandrasekhara Venkata Raman would go on to surpass the achievements of his professor father by becoming the first Asian to receive the Nobel Prize in physics. 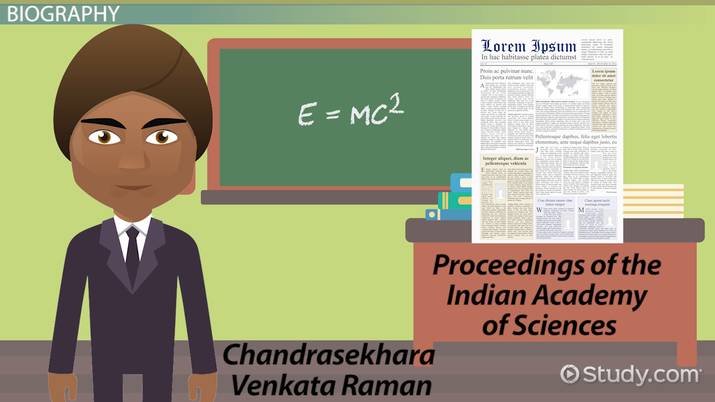 The second of eight children, C.V. was the son of a college professor. His father, Chandrasekaran, taught math, geography, and physics. He encouraged all of his children to excel in academics, and young C.V. finished his traditional schooling at the age of eleven.

Raman would complete both his bachelor's and master's degrees in physics before he turned 20. His early graduations were quite an achievement, even by today's standards.

After a brief stint in the Indian government's finance department after earning his master's degree, C.V. would return to the sciences as both a professor and an editor, founding the Indian Journal of Physics in 1926. He would also help to create the Indian Academy of Sciences in 1934, along with the Proceedings of the Indian Academy of Sciences. His research included studies of sound theory as it applied to musical instruments, and numerous optical analyses (diffraction, x-ray interactions, and human vision, among others).

In 1907, C.V. would marry the sister-in-law of a friend named Lokasundari Ammal. Unlike most traditional Indian marriages, this was not an arranged marriage, which was extremely unusual in India at the time. The couple would go on to have two sons, one of whom would become a researcher in the field of radio astronomy.

Raman was knighted and earn the title of Sir for his contributions to science (as India was part of the British Commonwealth then). Sir C.V. Raman would ultimately pass away from heart valve failure in 1970, still working in his laboratory until a few days prior to his death.

Raman would discover what is known today as the Raman effect, which helps to explain why certain molecules cause waves of radiation to scatter differently than other molecules.

While traveling to Europe in the early 1920s, C.V. noticed that glaciers had a blue color and was intrigued. He wanted to find out what the cause of the blue coloration was and would go on to analyze how water molecules scatter light in an attempt to explain the situation.

These experiments would lead him to be interested in how other materials might interact with light, or other types of electromagnetic waves. At the time, scientists knew about Rayleigh scattering, but didn't have a good explanation for other types of scattering interactions.

Every type of electromagnetic radiation, whether it is visible light or invisible rays like x-rays and gamma rays, has a wavelength. A wavelength is the distance from one location on a wave to the same location on the next wave that passes by a given point.

What Raman noticed is that when x-rays come in contact with molecules, they will scatter off of those molecules, and in doing so, change wavelengths. And when they scatter, they scatter in a specific pattern, depending on what type of molecule it is.

All molecules of water will scatter x-rays in one pattern, while all molecules of milk would scatter the x-rays in a different pattern. These differences in pattern allow scientists to identify unknown substances, based on prior knowledge of scattering patterns.

Raman's nephew, Subrahmanyan Chandrasekhar, would later be awarded the 1983 Nobel Prize in physics for discovering the Chandrasekhar Limit 52 years prior in 1931 - only one year after his uncle's award.

The Raman effect is an extremely useful technique, and modern devices such as the hand-held Raman spectrometer allow scientists to quickly identify unknown materials based on their scattering patterns. This technique is particularly useful for scientists who study crystalline solids, like minerals and gems, as it allows them to properly classify recently mined materials.

Chemists can also use it to identify unknown chemicals. This can be very helpful in identifying chemical weapon attacks, such as the gases used during World War II. When paired with newer laser technologies, the Raman effect can also help scientists to better understand the properties of the chemicals used in pharmaceuticals, paints, and other applications.

Chandrasekhara Venkata (C.V.) Raman became the first Asian to win the Nobel Prize in physics in 1930 for his discovery of the Raman effect. He was the second oldest of eight children born to a college professor, and would go on to marry and have two sons of his own. He greatly valued his research and publications, and would continue to work on his research until only a few days before his death.

C.V. Raman was special in many ways. He was the first Indian and non-white scientist to receive the Nobel Prize. It seems that he was geared for greatness from the beginning, being born into an academic family. Research other previous Nobel prize winners. Find three other Nobel winners that were unique and firsts in their field. How was their situation similar to Raman's? How was theirs different than his?

Raman continued to research right until his death. Research other contributions that Raman made to the scientific community. What did he accomplish that wasn't mentioned in the lesson?

Gautama Buddha: The Founding of Buddhism

Who was Jawaharlal Nehru? - Biography & Rule

Short Story on Honesty is the Best Policy for Kids

What is Scattering? - Definition & Examples

What Are Twin Prime Numbers?