Cyberbullying is a form of bullying in which a person uses technology or electronic means in harassing, threatening, or embarrassing someone. Learn about the signs and effects of cyberbullying and explore solutions to combat cyberbullying. Updated: 12/28/2021
Create an account

Have you ever had any of the following happen to you or your child?

If any of those happened to you, you were a victim of cyberbullying, which is a kind of bullying that occurs thanks to electronic technology like phones, computers, email, social networks, text messages, apps, in-game chat, and so on. 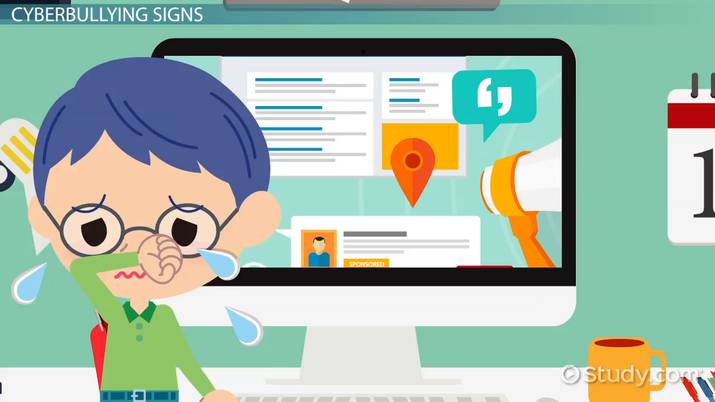 Coming up next: The Consequences of Cyberbullying

Jim is in junior high school and he's a victim of cyberbullying. On social media, he is constantly harassed by his peers. He is taunted and made fun of. His pictures, especially the unflattering ones, are sent around with glee. The non-embarrassing pictures are purposefully re-edited to make him appear very fat or ugly and then posted for everyone to see. He gets all sorts of text messages and messages on apps that demean him or even threaten him with harm. Some people have gone so far as to make fake profiles using his name, profiles that spread rumors about him or post messages clearly out of line with who Jim really is. Jim gets bullied via e-mail as well, and when he plays video games and uses voice chat, the other players constantly harass him and taunt his playing style and him as a person in general.

As you can tell, it doesn't matter if he's using a game console, a computer, a cell-phone, e-mail, SMS, apps, social media, or anything else; Jim is a victim of cyberbullying in many ways.

You might think, ''What's the big harm? It's just make-believe anyway!'' This is both true and false. It may take place in a virtual world, but the lines between this world and reality are increasingly blurred. Even if that weren't the case, there's a real person behind that virtual world who's hurt as much as if he or she were bullied in 'real' life. Kids like Jim, those who are cyberbullied, can suffer from all sorts of negative effects, such as:

Since these effects are the last things we want for Jim or anyone else in his shoes, parents must be aware of the solutions related to cyberbullying. First, parents need to be proactive about what electronic mediums of communication their kids use, when, where, and with whom. This will help them better understand where their kids are being bullied and by whom. They can ask their kids questions to find out this information, and they can 'follow' or 'friend' their child to keep an eye out for any bullying. If their kids aren't comfortable with this, perhaps another trusted adult can do this instead.

Once parents find out this information, they can take action. Sometimes, it's a matter of telling their child that they should always come talk to them if they're being bullied so the parents can help. Parents should emphasize they won't judge their child and won't take their computer or cell-phone privileges away; they're just trying to help.

In other instances, more serious solutions must be taken. Parents may need to install parental control software that monitors and limits their kids' use of certain websites where they may be bullied or puts a limit on their use. Parents should also educate their children as to how they can combat cyberbullies. Examples of this include:

If a parent suspects serious cyberbullying, they must:

Cyberbullying is a kind of bullying that occurs thanks to electronic technology like phones, computers, email, social networks, text messages, apps, in-game chat, and so on.

Examples of signs of cyberbullying include:

The effects of cyberbullying can include:

How to Tell the Hour in Spanish