Have you ever seen a one-eyed monster? What if you were stuck on an island full of them? Read on to learn about the play Cyclops by Euripides and analyze the theme. Updated: 01/03/2022
Create an account

Most of us have heard of a cyclops: a one-eyed creature from mythology. Some of us even know the story as told by Homer in The Odyssey, the tale of Odysseus' journey home from war. In this lesson, we will learn about Euripides' version of the ''Cyclops'' and see how he portrays Odysseus' brave encounter.

The play opens with Silenus, the old servant of Polyphemus the cyclops, talking to himself as he completes his daily chores outside of the cyclops' cave. He laments about his fate, how he was stranded on this island and taken captive by the one-eyed beast. He is interrupted as a flock of goats and sheep are herded by shepherds and a chorus of satyrs - creatures that are half man half goat.

Silenus hushes the group and shoos them away, telling the chorus leader that he sees men advancing. Odysseus, King of Ithaca and Trojan war hero, approaches Silenus with his men asking for water. They talk and realize they are both in the same situation, having been cursed to this island by angry gods through bad weather.

Silenus explains that cyclopes have no rules, no cities, no structure, and that they are angry cannibals. He fears for their safety. 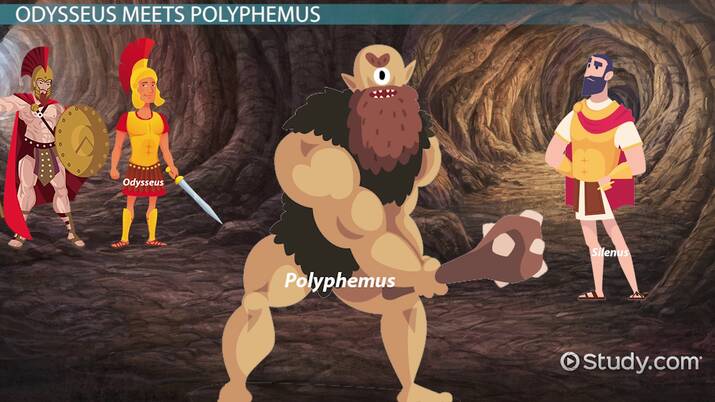 Coming up next: Iphigenia in Aulis by Euripides: Summary, Characters & Quotes

Odysseus offers to trade a strong liquor he received from the son of a god for food; Silenus agrees. Silenus brings Odysseus some cheese and sheep but hurries him off to keep him safe. However, it's too late; Polyphemus returns. Silenus hurries the men into the back of the cave to hide them.

Polyphemus is angered at his servants' lack of work and demands breakfast. As he eats in his cave, he notices Odysseus and his men. Silenus comes out of the dark pretending to be injured. He tells the cyclops that Odysseus and his men beat him as he tried to stop Odysseus from stealing their food. Polyphemus tells Silenus to prepare them for his dinner, for he will eat the men as a wonderful treat.

Odysseus comes forward and tells Polyphemus that Silenus was selling his goods. The chorus leader backs up Odysseus' truth, but their words are ignored. Polyphemus asks Odysseus' name and origin. Odysseus explains his story and begs for hospitality as is the custom of Greek culture, however, he leaves out his name. It is here that Odysseus prepares his master plan to escape, and Polyphemus denies the custom of Greek tradition.

Polyphemus, son of the god Poseidon, refuses to heed Odysseus' warnings of tradition and says he fears no gods and will make no sacrifices. He chases Odysseus' men into the cave as Odysseus prays to the goddess Athena for help. As the chorus sings of the torment and violence, Polyphemus wreaks havoc on Odysseus' men, bashing out their brains and tearing them apart.

Odysseus sneaks out of the cave and describes to the chorus leader how he kept giving the cyclops the strong wine, and as he became drunker, he snuck out. Odysseus and the leader work out a plan to escape Polyphemus for good. Odysseus explains he wants to burn the eye of the cyclops by lighting a branch on fire and piercing his eye.

As the two drink, Odysseus and the leader prepare to harm the cyclops, but the chorus makes excuses as to why they cannot help. Odysseus gathers what's left of his men, burns the end of the stake, and rams it into the cyclops' eye. The leader and the chorus cheer after they hear the bellows from the cave. They are now free.

Polyphemus comes to the edge of the cave, and the leader asks the cyclops what happened. The cyclops explains, ''Noman has undone me,'' which sounds like he injured himself. He continues to shout that ''Noman'' has done this to him, to which the leader replies in mocking terms.

On the way out, Odysseus reveals his identity, and Polyphemus says an oracle predicted this tragedy. The men escape to the ship leaving Polyphemus alone and injured.

Polyphemus had a choice to help Odysseus, but his pride got in the way. Pride, or hubris, is the act of thinking you are better than others, and in Greek times, it meant putting yourself above the gods. In this tale, we see how pride brings down the divine cyclops, refusing to show Odysseus and his men hospitality.

Polyphemus believes that, since he is a giant and his father is Poseidon, no one can harm him. So when Odysseus invokes the custom of hospitality, Polyphemus becomes angered that someone or something is above his law.

The concept of hospitality was prevalent in Greek culture, encouraging all to treat everyone they met like a god. If not, the consequence could be dire, as with Polyphemus getting his eye stabbed with a stake. The lesson here is to be good to all; you get what you give.

In the play, ''Cyclops'' by Euripides, Odysseus, a Greek hero, becomes stranded on an island belonging to the cyclopes. The cyclops Polyphemus refuses to treat him well and eats some of his men.

Using a strong liquor, Odysseus gets the cyclops and his servant Silenus drunk. With the help of the chorus leader, they burn and poke the eye of Polyphemus and get away by tricking the cyclops into thinking that ''Noman'' has harmed him.

This tale reminds us to be good to all and swallow your pride, the idea that you are better than others, or your bad energy can turn into a fate twice as negative.

Cyclops in The Odyssey & Greek Mythology | Who is Polyphemus?

The Sirens in the Odyssey | Features & Song

Themes in The Odyssey by Homer | Hospitality, Analysis & Quotes

Who Are the Suitors in The Odyssey?

Laestrygonians in The Odyssey

Odysseus and the Trojan Horse

Athena in The Odyssey by Homer | Character Analysis & Role

Poseidon in The Iliad