Everyone knows that you inherit genetic information from your parents, but did you know there are multiple ways for this to occur? In this lesson, we'll look at extranuclear inheritance and see what this means for passing on DNA.
Create an account

Inheritance is a tricky subject. Sometimes you inherit things you want. Your uncle's million-dollar fortune. Family heirlooms. Sometimes you inherit things you don't want, but you kind of have to take because otherwise you'll hurt someone's feelings. That weird bird clock from your grandma's house. Your great-aunt's entire bottle cap collection. How you inherit genetic traits can be just as tricky. Maybe you got your mom's eyes, or your dad's height, but also a family predisposition to high cholesterol. Yeah, bet you wish you could re-gift that one.

Now, the majority of genetic traits are inherited from both parents and contained on the chromosomes within the cell nucleus. That's where most genetic traits are contained. But, there actually is another way for traits to be passed on. Extranuclear inheritance, sometimes called cytoplasmic inheritance, occurs when genetic traits are inherited from a source outside of the cell nucleus. Extranuclear. Outside the nucleus. See how that works? Organelles like the mitochondria or chloroplasts actually contain genetic information, which is how this can happen. Yep, turns out there are even more ways to inherit things from your family. Lucky you. 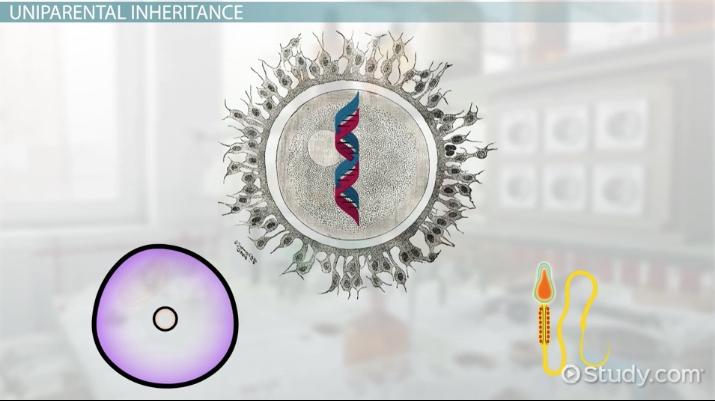 Coming up next: Mutagens: How the Environment Affects Mutation Rates

Extranuclear inheritance occurs when genetic information from mitochondria or chloroplast organelles is passed from parent to offspring. There are a few ways this can happen. First we've got vegetative segregation. This is a result of random replication of extranuclear organelles. Basically, during mitotic cellular division, the mitochondria or chloroplasts are randomly replicated and partitioned, and the offspring cell receives a random sampling of the parent's organelles.

This means that additional genetic information may be pumped into the new cell. Considering that extranuclear DNA is much more likely to randomly mutate than DNA within the nucleus, this is significant. We see this a lot in single-celled organisms that reproduced asexually, but also in other cells that divide through mitosis.

Well, the female gamete, the egg cell, is a complex cell that has organisms like mitochondria within it. male gametes, called sperm cells do, too; however during fertilization, the mitochondria within the sperm cells are destroyed, and only the DNA in the nucleus makes it into the egg. So, the fertilized egg contains genetic information from the nucleus of both egg and sperm, but only mitochondrial DNA from the egg. This means some genetic information in the egg mitochondria can only come from the mother and never the father. It can only come from one parent, so it's uniparental. Got it?

If the mother has a degenerative disease, it may be passed through mitochondrial DNA. However, if a father has a disease he inherited through his mother's mitochondrial DNA, that will not be passed on to his children. Since that disease is carried on extranuclear DNA, it will not be inherited. Uniparental inheritance is a very unique system, and since information only comes from one parent, the rules of Mendelian inheritance (the expected statistical ways that genetic information from each parent will combine) do not apply.

Okay, so if uniparental inheritance means that extranuclear DNA is only inherited from one parent, any guesses about the process of biparental inheritance? Yeah, this is when extranuclear DNA is inherited from both parents. It happens when both parents provide mitochondrial DNA for their offspring. It's not something that occurs very often and is only even possible in a handful of species. Certain kinds of yeast, for example, are capable of reproducing in a way that allows mitochondrial DNA from both parents to be inherited. However, as many of us know, the more your inherit, the more likely you are to get stuck with something you may not really want.

Genetic information is passed from parent to child, generally as DNA in the cell nucleus. However, certain other organelles like chloroplasts and mitochondria also contain some genetic information. When DNA from a source outside of the nucleus is inherited, it's called extranuclear inheritance, sometimes called cytoplasmic inheritance. This can happen in three main ways.

First is vegetative segregation, a result of random replication of extranuclear organelles. Basically, a parent cell unintentionally donates organelles to the offspring cell.

The next type of extranuclear inheritance is uniparental inheritance, where genetic information is passed to a child organism from only one parent. This most commonly occurs when mitochondria from the egg cell is passed to the offspring.

Lastly we've got biparental inheritance, which occurs when extranuclear DNA is inherited from both parents. This is very rare and can only happen in some species. But, the result of all of these is the same. Inheritance can be a blessing or a curse, but it is an inevitable part of life.