Earth has the ideal temperature to sustain life due to possessing factors that are 'just right' from daily and annual temperature patterns. Explore the patterns that make Earth just right, influenced by daytime heating, nighttime cooling, cloud cover, wind, and many other factors. Updated: 11/07/2021
Create an account

You've probably noticed temperature patterns. For example, it gets warmer during the day or cooler when it's cloudy. What if I were to tell you the same holds true on other planets as well? Although the focus of this lesson will be Earth, we are going to look at two extremes in order to examine why the temperature varies daily and annually on Earth.

Think back to the fairy tale 'Goldilocks and the Three Bears,' where things were too big, too hot, too small, or too cold. Earth, Mars, and Venus would have fit nicely into that fairytale, with the Earth being just right and Mars and Venus having too little or too much of various temperature-altering properties. But more on that shortly!

You might think that Earth's location in the solar system is what makes it the 'just right' planet, but there's more to the story than proximity to the Sun. In fact, many things can affect daily and annual temperature patterns. 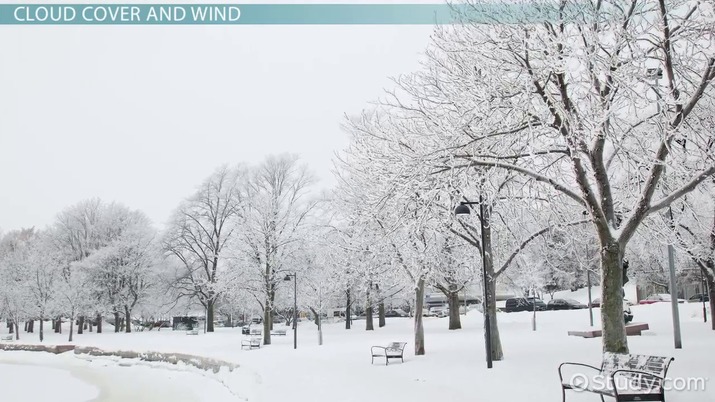 Coming up next: Measuring Temperature & Converting Units of Temperature

It takes the Earth a little under 24 hours to rotate on its axis, and this is considered a day. As you know, during a day, there is a period of daylight and a period of darkness. Mars is similar to the Earth, with a day of a little over 24 hours. Venus, however, has an extraordinarily long day. In fact, one day on Venus is 243 Earth days.

When the sun rises on Earth, Mars, or Venus, daytime heating takes place. Daytime heating, as the name implies, just means the rise in temperature that occurs during the day. This is caused by the sun's energy reaching the surface and then radiating back into the atmosphere. Some of that heat energy can radiate back into space, but much of it gets trapped due to greenhouse gases. Like their name suggests, greenhouse gases trap heat energy (like a greenhouse), which keeps the planet toasty warm.

In our planetary Goldilocks story, the greenhouse gases on Earth are just right. This means that enough heat energy gets trapped so that, after the sun sets, the temperature doesn't cool off too much. Mars doesn't have as many greenhouse gases as Earth, so a lot of the heat energy from the sun radiates back into space. As a result, the temperature on Mars fluctuates dramatically when the sun sets as much of the heat energy escapes. For example, during the summer near the equator, Mars can get to a comfortable 65 degrees Fahrenheit during the day but at night, the temperature can drop to a frigid -130 degrees Fahrenheit.

Venus, on the other hand, has a lot of greenhouse gases, so too much heat energy gets trapped, resulting in surface temperatures of nearly 900 degrees Fahrenheit. Yep, you don't have to worry about the temperature cooling off too much during the night on Venus! This leads us into nighttime cooling.

As you've probably guessed, the flipside to daytime warming is nighttime cooling, or the cooling that occurs during the night due to heat energy radiating back into space. Remember, the greenhouse gases on Earth keep heat energy trapped, so, although the temperature does drop at night, a lot of the energy remains trapped and keeps it from getting too cold. Contrast this with Mars, whose temperature drops very quickly after the sun sets (remember 65 degrees Fahrenheit to -130 degrees Fahrenheit), and Venus who has less temperature variation due to all the greenhouse gases.

You might not realize it, but you are familiar with daytime heating and nighttime cooling on Earth. Just take a look at the weather forecast and you can see the daily highs are reached during the day, due to daytime heating, and the daily lows are at night, due to nighttime cooling. This heating and cooling pattern exists throughout the year, but due to seasons, the daily highs and nightly lows will vary throughout the year.

Daytime heating and nighttime cooling are not the only factors that play into temperature patterns. Clouds reflect the sun energy that is coming to Earth. In fact, about 30% of the sunlight that reaches Earth is reflected back into space due to cloud cover. When weather forecasters predict the weather, they assume the temperature will be a little lower during the day if they suspect clouds, but a little warmer after the sun sets. This is because clouds act like a greenhouse, trapping heat energy so it doesn't radiate away at night. Depending on where you live, you may notice a daily or annual pattern with clouds. Some regions, for example, experience more clouds during the afternoon. Other areas experience more clouds during the winter months.

So if Earth has the 'just right' cloud cover, what about Mars and Venus? Venus is almost 100% covered by clouds. This results in much of the sun's energy getting reflected away from the planet but remember, the planet has a lot of greenhouse gases, so the heat that does enter the atmosphere gets trapped, causing sweltering temperatures. Mars, on the other hand, doesn't tend to have a lot of cloud cover, so the sun that reaches Mars is able to penetrate and reach the surface. That being said, remember also that Mars doesn't have much in the way of greenhouse gases, so even though the sun can reach the surface, a lot of the heat energy radiates back into space.

Wind is another factor you must take into consideration. Wind distributes heat throughout the Earth and it impacts the ocean, the atmosphere, and the land. Depending on where you live, wind can bring warm, cold, dry, or moist air into your region. For example, there are winds called the Chinook winds that bring warm air to the eastern parts of the Canadian Rockies during the frigid winters. In India, there are monsoonal winds that bring moist air from the ocean onto land. These winds often follow a pattern. The monsoonal winds, for example, bring rains to India during the summer and dry weather during the winter. For Earth, our winds are just right, even if you feel your area could experience a little more warm wind during the winter months!

Before we check out planetary Goldilocks for wind, you need to know that, in order for wind to redistribute heat energy, there needs to be an atmosphere, and the thicker the better. So let's check out poor Mars, who has a thin atmosphere which results in less heat energy being distributed. That's not to say Mars doesn't have wind. In fact, the winds on Mars can be quite strong, but because of the thin atmosphere, heat isn't distributed well.

Venus, on the other hand, has an extremely thick atmosphere (in fact, 100 times thicker than the Earth's), so temperatures do not vary as much on Venus because the winds distribute the heat energy throughout. But, since temperatures are approaching 900 degrees Fahrenheit, the wind can't really cool down the planet enough to make it bearable.

Although the focus of this lesson is daytime heating, nighttime cooling, clouds and wind, we need to touch on other factors that impact daily and annual temperature patterns, like seasons, latitude, geography, and elevation. The tilt of the axis of the planet is what causes the seasons. The Earth's axis is titled at about 23.5 degrees. When the North Pole is tilted towards the Sun, that's summer solstice, and when the South Pole is tilted towards the Sun, that's winter solstice. That not only applies to Earth, but other planets as well. Venus has a small tilt at 3 degrees, so there isn't much variation between seasons on Venus. Mars has a tilt similar to Earth, at 25 degrees, but since Mars takes twice as long to orbit the Sun, the seasons are longer.

Other factors for the Earth (and elsewhere) include latitude, geography, and elevation. Generally, as you get further north or south of the Equator, temperatures decrease. Geography impacts the temperature as well. Water and land have different heating and cooling rates, as do valleys and mountains. Finally, the higher you get from sea level, the cooler the temperature.

Although Venus, Mars, and Earth are all rocky planets orbiting our Sun, the Earth is the only one known to have life. Venus has a thick atmosphere which traps heat, causing temperatures to reach upwards of 900 degrees Fahrenheit on the surface. Mars has less of an atmosphere compared to Venus and Earth, which causes large temperature variations between night and day.

Earth's ideal temperatures are due to its 'just right' factors. For example, the Earth has the right amount of greenhouse gases to prevent too much of a variation between daytime heating and nighttime cooling. Mars has too little and Venus has too much.

Next, the Earth has the right amount of clouds; too few or too many alters the amount of sunlight that penetrates. Due to the thickness of the atmosphere, Earth is able to redistribute much of its heat energy through winds. If the atmosphere is too thin, like Mars, there is wind but it isn't able to move heat energy around.

Familiarity with this lesson's details could help you to:

Glacier Movement | How Do Glaciers Move?

What Is the Chemical Equation for Cellular Respiration?