I have taught at the middle grades level for ten years and earned my MA in reading education in 2009. I’ll later earned my MS degree in higher education. During the last few years I have been doing educational consulting work. 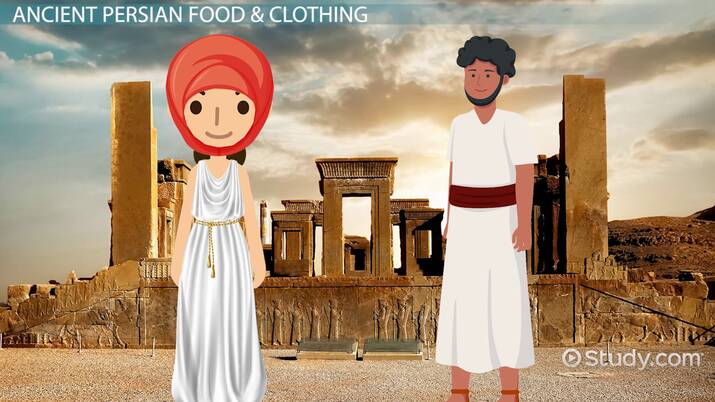 Imagine being a citizen of ancient Persia, which lasted from 550 to 330 BCE. What would you have looked like? The dress of the ancient Persians was greatly influenced by people who traveled from other places. As an ancient Persian woman you would have worn pleated skirts, chitons (meaning draped robes), and possibly overgarments that covered your head but left your face uncovered.

Much more is known about how ancient Persian men dressed. Horsemen wore tighter fitting clothes, whereas soldiers typically wore the color red, with headgear and other such protective clothing. People in the upper class, women and men alike, wore loose clothing and beautifully decorated headwear. As a farmer, you probably wore long gowns that reached to your knees or even your ankles!

The ancient Persian diet looks very similar to the region's current diet: produce and grains with smaller amounts of meat and dairy. Bread and rice were the most important items. How the bread was prepared and what was served with the rice added variety to every dish.

Common vegetables that were grown included garlic, spinach, onions, carrots, and various types of nuts. Fruits, such as oranges, grapes, and dates, were oftentimes eaten as a dessert.

You and your family could have lived in one of a number of different lifestyles in society. Ordinary folks, or peasants, lived and worked a rather ordinary life. Your food rations, or the amount of food that was paid for services, depended upon your skills and responsibility. In such jobs you would find both men and women in supervisory roles.

You would find people in a number of different occupations like merchants, soldiers, government workers, dress and costume makers, school teachers, and craftsmen, just to name a few.

You and your family may have lived a nomadic lifestyle, requiring you to move from place to place rather than live in one area for long. These groups often moved to follow the herds that sustained their diet, and did not hold regular jobs.

Rich, royal folks made up a small minority of the society and were often landowners, who owned lands and businesses, thus employing many people, like house servants, farmers, and craftsmen.

Religious diversity was also a way of life in ancient Persia. Communities and the king were Zoroastrian (monotheists), but those who had been conquered were allowed to keep practicing their religions. Zoroastrian individuals were not allowed to eat ''evil'' foods, including insects and reptiles. They celebrated their own version of the new year, as well as solstices and had mandatory feasts.

The Persian Empire had impressive architecture and art influenced by other great societies of the day, such as the Chinese Mongol Dynasty. Ruins show grand buildings and palaces with columned, spacious halls. Monumental, extravagant, and open style was often what was used in big structures. This was done to achieve a feeling of space as well as luxury.

The popularity of artwork changed through the years, as is the case today with seasonal changes of clothes and the latest smartphone. As an ancient Persian, you would have seen engraved metalwork, which was either silver or bronze cups that were often engraved with plants, animals, or court scenes.

Other popular artwork of the day included jewelry and pottery. A number of these pieces were exhibited in museums and owned by the richer people of the society. Intricately designed carpets were popular and sold across the empire, as well as to outside markets. Workshops were even held for everyday people to generate interest and fund such projects. Miniature art was a fan favorite in ancient Persia, too, particularly among the locals. This type of art was used in books, like poetry, and is now seen in museums and casinos.

Formal education seemed to be reserved for boys. They learned reading, writing, math, grammar, and astronomy. Weaponry education was believed to allow the young men to grow into protectors of the family and, eventually, the empire.

As an ancient Persian you would have enjoyed reading some great literature, especially poetry, which was written in the official language of the empire, Middle Persian. Most of the poetry included religious topics, narratives or stories, and heroic and romantic tales.

It's believed that children from the upper class may have had the privilege of learning an ancient form of writing called cuneiform that used wedge-shaped characters on clay. This education allowed a fortunate few individuals a slight advantage over others in the ancient society.

As an ancient Persian, you and your family would have witnessed a number of accomplishments that would affect daily life, such as an effective road system, a single language for professional communication, and underground waterway system for irrigation.

Additionally, ancient Persia was the first society in history to end slavery! Talk about being light years ahead of others. They went on to write the first animal and human bill of rights.

All right, let's take a moment or two to review what we've learned about ancient Persians' daily lives. As we learned, occupations in ancient Persia included craftsmen, teachers, clothes makers, government workers, and farmers. Most Persians practiced Zoroastrianism as their religion, but other faiths were also tolerated.

The ancient Persian diet looks very similar to the region's current diet: produce, bread, rice, and smaller amounts of meat and dairy. Fruits were oftentimes eaten as a dessert. Many ancient Persians lived a nomadic lifestyle, requiring them to move from place to place rather than live in one area for long. Ancient Persian literature, (typically written as cuneiform, a form of writing that used wedge-shaped characters on clay), art, and architecture were quite popular and captured the imaginations of the people.

The Rise & Fall of the Persian Empire

Hammurabi's Code: The Advent of Law, Prerequisites and Implications