Daisy Buchanan is a significant character and symbol of the paragon of perfection embedded in the works of ''The Great Gatsby''. Learn more about her character analysis, quotes, purpose, and what she means to the storyline. Updated: 11/30/2021
Create an account

F. Scott Fitzgerald's 1925 novel The Great Gatsby is considered one of the most important novels in all of American literature. In it, Fitzgerald captures the inimitable spirit of the Roaring Twenties and creates some of the most iconic characters in all of literature, from the unforgettable Jay Gatsby to the Louisville debutante Daisy Fay Buchanan, the dream girl who drives Gatsby's ambitions and frustrates his desires.

While Gatsby is rightly esteemed as one of the most illustrious characters in all of American literature, it is his dream girl, Daisy, who fuels his success. It is all to win the love of his Daisy that Gatsby becomes 'The Great'. So who is Daisy, and what is it about her that inspires such breathtaking passion? A few quotes from the text may help us to better understand Daisy and her irresistible charm. 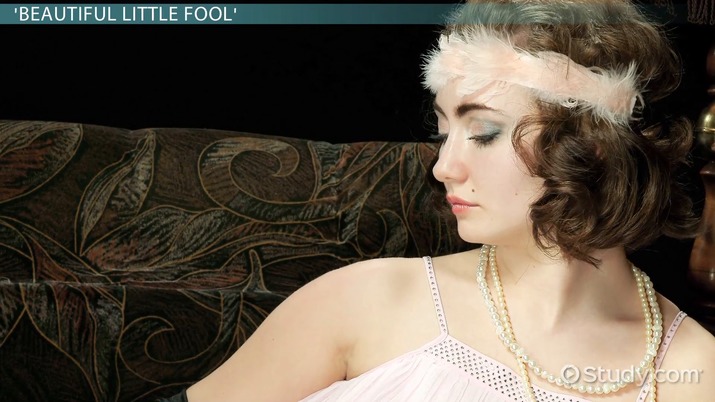 Coming up next: Tom Buchanan in The Great Gatsby: Character Analysis & Quotes

'That's the best thing a girl can be in this world -- a beautiful little fool,' Daisy says. On the surface, Daisy may not seem to be very bright. A pampered heiress from an old Louisville family, Daisy has lived a life of luxury and ease. And she wants nothing more than to keep it that way.

But in her indulged naiveté, an idealist like Gatsby can find a blank slate on which to write his every romantic fantasy. She seems the pristine and fragile princess crying out for the protection of a hero, for the kind of knight in shining armor that Gatsby aspires to be. Her beauty and seeming ignorance, the lack of volition and guile, and the ethereal otherworldliness that her money provides for her drive Gatsby's fascination.

She exists in stark contrast from the women of Gatsby's previous experience. Born of a destitute North Dakota family, the women Gatsby has known in the past were hardscrabble and jaded, coarsened by the struggle to survive. But the boy who was born 'Jimmy Gatz' possessed an audacious capacity for hope and in his fantasies of the life he would build for himself, nothing short of a fairy tale princess, an idealized image of the perfect woman, would suffice for a mate. Daisy, the 'beautiful little fool', fits the bill precisely. On the canvas of her lovely emptiness, Gatsby can inscribe all his most cherished dreams.

'Her Voice Is Full of Money'

For the penniless and nameless Gatsby, a woman like Daisy, with her illustrious pedigree and endless reservoir of money, is the embodiment of all hope: 'Her voice is full of money,' he says. She is the personification of everything that Gatsby wishes to create, of all that he feels he should have been born into but was not. She is the image of the past recaptured and corrected, the luminousness of wrongs made right.

Daisy's 'monied' voice is her weapon and her defense. Time and time again throughout the novel, Daisy uses her voice cunningly to draw others in; they often must lean in to hear her speak, and this symbolizes the genuflection, the courteous bow, that Daisy seeks from all those around her. She requires, expects, and demands both protection and deference, the life of ease and solicitude that wealth and a family name can buy.

Daisy speaks the line, 'It makes me sad because I've never seen such - such beautiful shirts before' when her former love, Gatsby, returns after five years' absence and shows her the mansion he has acquired for her sake. But this line is about far more than shirts: Daisy rejected Gatsby five years prior because he was an impoverished soldier. After her rejection, Daisy's relatives deemed him unworthy of the heiress of an illustrious Southern family, so she marries Tom Buchanan, of fine stock with money to spare. Her marriage to Tom is largely an unhappy one: he is unfaithful, crass, and sometimes cruel. And so when Daisy reunites with Gatsby and is surrounded by the affluence he has won in her name, she regrets the losses of the past, the abundance (of both love and money) that might have been, symbolized in the expensive, rainbow assortment of shirts that Gatsby rains about her.

'Borne Back Ceaselessly Into the Past'

This final line of the novel, 'So we beat on, boats against the current, borne back ceaselessly into the past,' is one of the most famous lines in all of literature. It encapsulates Daisy and her relationships with both Gatsby and Tom. For Gatsby, Daisy is the image of a past crying out to be made right, a yesterday that can be recaptured and restored to all it should have been. But the 'current' against which Gatsby must beat is the reality of who Daisy is, both in herself and in her relationship with Tom.

This 'beautiful little fool' is as hard as flint in her unwavering service of herself. She is practical and selfish, driven by the tides of self-interest, convenience, and expediency. And in this, she finds far more kinship with Tom than with Gatsby. Daisy and Tom together form a fortress of self-preservation, and it is against this wall of self-protection that Gatsby, in his blind, foolish, false love, smashes himself to pieces.

In his 1925 masterpiece The Great Gatsby, F. Scott Fitzgerald presents an iconic tale of a doomed love triangle. The tragic hero, Jay Gatsby, destroys himself for the love of Daisy Buchanan. She is the ultimate fantasy girl, the one who got away, the 'beautiful little fool' upon which Gatsby can cast all his fondest dreams. She embodies the life of luxury, ease, and indulgence that the once-penniless Gatsby craves. And yet Gatsby's Daisy, the object of such furiously destructive love, is more fantasy than reality. In reality, she is cunningly self-protective, devoted solely to her own self-interest and to the life of gaiety and comfort she feels her wealth entitles her. In this, she is far more the kindred spirit of the brutal multimillionaire to which she is married, Tom Buchanan, than to the foolishly devoted Gatsby.

Love in The Great Gatsby

Feminism in The Great Gatsby

Tom Buchanan in The Great Gatsby

Materialism in The Great Gatsby