When you were a kid, what did you want to be when you grew up? Maybe a fireman or a teacher, an attorney or an astronaut? Young James Gatz, the title character in F. Scott Fitzgerald's The Great Gatsby, wanted nothing more than to become the opposite of his parents. Born into a family of poor farmers in North Dakota, James Gatz spent his nights dreaming of who he believed himself to be: a larger-than-life man of means, surrounded by a world of grandeur and opulence. Not until a chance meeting with a meta-mogul multi-millionaire, Dan Cody, did Gatz's imagined destiny start to become a reality. 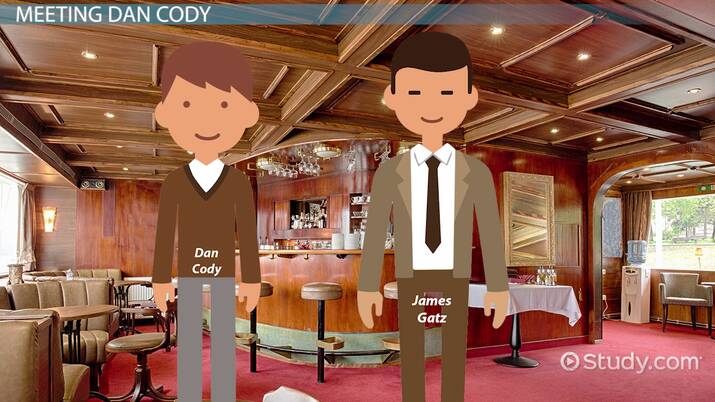 Coming up next: Klipspringer & Owl Eyes in The Great Gatsby

James Gatz moved shiftlessly through Minnesota, searching for the next big break, that singular opportunity that would change his life. He found that in Dan Cody. While lounging on the shore of Lake Superior, Gatz noticed a yacht bobbing in the water. Knowing full-well that a storm was brewing, Gatz rowed out to the yacht to warn its owner, Dan Cody. Cody brought the young man on board and asked him his name. Realizing his moment of opportunity, Gatz introduced himself as Jay Gatsby, instantly reinventing himself and closing the door on his past as a poor farmer's son.

Dan Cody's role in The Great Gatsby is fairly limited, but his impact on Gatsby was profound. When Gatsby encountered Cody on Lake Superior, the yachtsman was about 50 years old. During the late 1800s, Cody had become wealthy as the result of various metal rushes in the West and eventually made his millions thanks to Montana copper. Cody had the life that Gatsby had imagined for himself as a kid and a teenager: an extravagant lifestyle, fabulous wealth, and all the power those things brought with them.

The former James Gatz spent his time with Cody observing and absorbing, carefully cultivating the image of the newly made Jay Gatsby. In addition to learning about who to be from Cody, Gatsby also accounted for Cody's shortcomings. For example, Gatsby witnessed the effects of Cody's alcohol consumption. In turn, Gatsby exercised moderation, even in the midst of his over-the-top blowout parties.

Unfortunately for Cody (and Gatsby), he met an untimely fate. Along with Dan Cody's love for expensive things and heavy drinking, he was also a sucker for women. Cody had many women in his life, all of which were interested in taking a piece of his millions for themselves. Off the yacht with one of his lovers, Ella Kaye, Cody mysteriously died. In his will, Cody had generously left Gatsby $25,000 (roughly $600,000 by today's standards), but Gatsby never saw a single cent of that inheritance. Somehow, Ella Kaye walked away with all of Cody's fortune.

Born into a family of poor farmers in North Dakota, James Gatz met a meta-mogul, multi-millionaire yachtsman named Dan Cody. James instantly reinvented himself as Jay Gatsby and traveled with Cody for five years. Dan Cody was the physical embodiment of Gatsby's ideations of wealth and power. Cody dies mysteriously while off with his lover, Ella Kaye, who evidently also stole the inheritance he left for Gatsby. Gatsby was left penniless, but he was still rich with experience. Cody was Gatsby's first opportunity to get close to the life he imagined for himself.

Tom Buchanan in The Great Gatsby

Lies in The Great Gatsby

Personification in The Great Gatsby