In the Inferno, Circles Two through Five of Hell are assigned to people who are guilty of sins of incontinence. This means that they lack moderation, discipline, or restraint in one or more areas of their lives. These circles contain sinners who are lustful, gluttons, spenders or hoarders, and ''wrathful'' or ''sullen.'' These people exhibit either excess or negligence when it comes to sex, food, money, or anger.

Although hoarding can be caused by a psychological disorder, for Dante, it's a hell-worthy offense. The Fourth Circle of Hell, found in Canto Seven, is reserved for those guilty of avarice, or greed, who either spend or hoard too much money in pursuit of material gain. 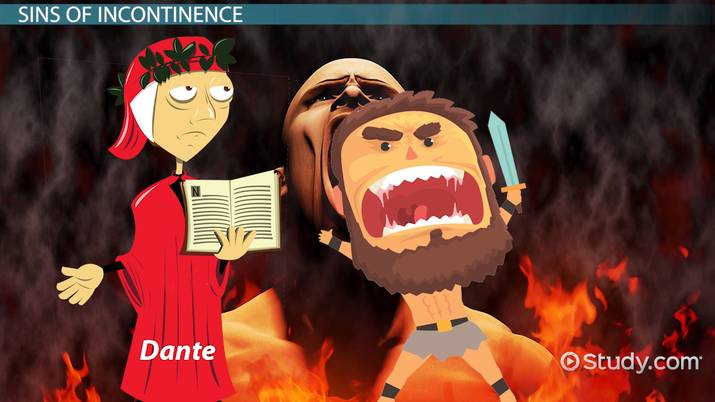 Try it now
Back
Coming up next: Dante's Inferno Fifth Circle of Hell: Punishments & Description

To get to the Fourth Circle, Dante and his guide Virgil have to climb down a large rock. This circle of hell is divided in half, with one side for the spenders and the other for the hoarders. Dante writes that many Catholic ''clerics, cardinals, and popes'' are here because they're guilty of avarice, which causes them to hoard money. As he looks around, Dante sees that everyone from the spending side is either charging toward or already entangled in a brawl with someone from the hoarding side, so that the two men are surrounded by people fighting.

On the border between the Third and Fourth Circles, Dante and Virgil run into Plutus, who is called ''the great Enemy'' in Canto Six because he is associated with greed, which is one of the most powerful sins to corrupt mankind. We don't get much of a physical description of Plutus. However, Virgil calls him an ''accursèd wolf,'' and we know that he speaks with a horrifying ''gutteral, clucking voice.'' Virgil tells Dante not to be afraid of Plutus, since the monster is not allowed to impede their journey through hell.

In the Fourth Circle of Hell, sinners are punished by being forced to fight each other. Each person pushes a large, rolling weight with his or her chest and crashes into someone guilty of the opposing sin from the other side of the circle. As they collide, the spenders and hoarders ''curse each other,'' asking: ''Why do you squander?'' and ''Why do you hoard?'' After each clash, each immediately charges forward with their weight toward another opponent for all eternity.

We've learned that Circles Two through Five of hell are for people guilty of sins of incontinence. These sinners exhibit either excess or negligence when it comes to sex, food, money, or anger. These sins are officially known in the Inferno as lust, gluttony, avarice, and wrathfulness or sullenness. The Fourth Circle of Hell is for those specifically guilty of avarice, who either spend or hoard too much money.

This circle of hell is divided in half between the spenders and hoarders, who are constantly brawling with each other. The boundary between Circles Three and Four is inhabited by Plutus, who's described as ''the great Enemy'' because he's linked with the powerful sin of greed. In the Fourth Circle, sinners are punished by being forced to fight each other for eternity by rolling enormous weights toward one another.

Levels of Hell in Dante's Inferno | 6th Circle of Hell

Second Circle of Hell: Lust in The Inferno by Dante Alighieri | Punishments & Analysis

Limbo in Dante's Inferno: Overview & Quotes | What is Limbo?

20,000 Leagues Under the Sea Study Guide