Databases are structures of organized data. Learn a variety of key terms that relate to data basics, database management, and relationships between different types of tables. Updated: 12/28/2021
Create an account

Have you ever walked the streets in a foreign country? If you have, you probably felt quite out of place. Conversations were going on around you, people smiled and laughed...but you didn't understand the language. Diving into the world of databases can feel the same way! In order to effectively manage and navigate databases, it's essential to know the terminology. Let's walk the streets of databases and see if we can make the ''language'' feel a little less foreign. 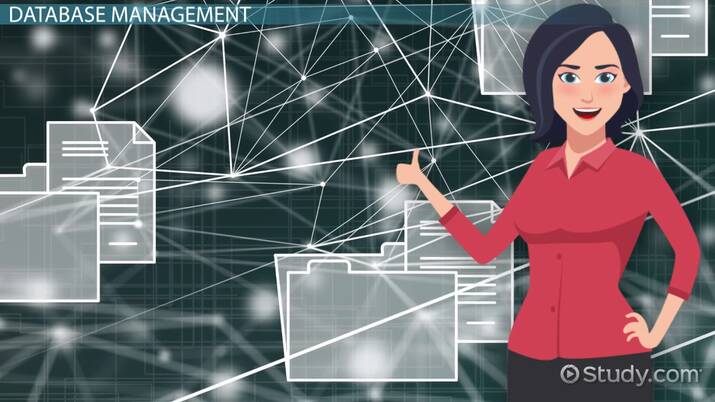 Understanding databases has to start at the surface. A database is simply a structured collection of data. The data is typically ordered into tables similar to a table you may see in Microsoft Excel - only much larger! Each table has columns and rows and a piece of data housed in a specific column. A row is referred to as a record. Each piece of data has a data type, such as an integer, date, or time, that helps the computer ''expect'' and define what type of data is allowed in that column. The data doesn't just sit there in cyberspace somewhere, though; the tables and data housed in a database can have a number of different uses and relationships.

A table has what's called a primary key that helps relate it to other tables. A primary key is usually a critical and identifying piece of data. For instance, in a table of customer names, addresses, and phone numbers, the column containing the name would most likely be the primary key because it holds the most significance.

A foreign key works in conjunction with a primary key. A foreign key tells two tables that they are housing similar columns. In our customer example, we might have another table that holds customer names also but additionally, stores their order number and invoice number. A foreign key on the customer name column would help tie this table to our first table, assuming this is a pool of the same customers. Data within a database can have several different types of relationships, which we will explore further.

If you're with me so far, we're doing great! We've navigated the first street in our database journey, but now, it's time to look at how a database is accessed and managed. A database is accessed through a DBMS or database management system. This is a specialized software that handles the storage, updating, and retrieval of data that is housed within a database. A DBMS allows you to query a database, which is the process that involves writing a snippet of simple code that displays or alters data in a database, matching the requirements given by the user. This is a quick way of accessing only the data you need without having to look through tables that potentially contain millions of entities.

SQL, or structured query language, is the programming language that's standard for querying a database. An SQL query might contain such words as ''update'', ''insert'', or ''delete'', which are considered to be DML or database manipulation language because queries containing these words are making changes to the database, not simply accessing information. Terms such as ''create'', ''alter'', and ''drop'' are considered DDL, or database definition language, because they can either create, modify, or remove entire tables within a database. A query containing the word ''select'' that simply displays data to the user is commonly referred to as a select statement.

Tables within a database can have three different types of relationships: one-to-one, one-to-many, and many-to-many. Understanding each of these relationships can really help a database to feel less foreign because it maps tables to one another and shows how the data is all interconnected.

Okay, let's take a moment or two to review what we've learned about database terminology.

We learned that the concept of a database is simple: a large, organized collection of information. We also learned about primary keys, which are critical and identifying pieces of data that help relate them to other tables and foreign keys, which work in conjunction with primary keys and tell two tables that they're housing similar columns. We also looked at database management systems, which are specialized software that handle the storage, updating, and retrieval of data and SQL, or structured query language.

We also looked at database manipulation language, in which queries containing certain words are making changes to the database, not simply accessing information, database definition language, which can either create, modify, or remove entire tables within a database, and select statements, which are queries containing the word 'select' that simply display data to the user.

To top it all off, we looked at junction tables, which hold information from both tables and have primary keys that are combinations of the foreign keys from both tables that they're relating to.

Throw in all these concepts we looked at and the simplicity might look a little like chaos. Databases are intimidating if you don't know how to approach them, but now that you're armed with the terminology needed to navigate even the largest and trickiest database, you are poised for success!

What is Normal Form in DBMS? - Types & Examples

Database Concepts and Structures: The Elements That Make Up a Database

What is an Object-Oriented Database?

Database Record Overview & Analysis | What is a Record in a Database?

What is an Entity in a Database?

Database Examples, Schema & Types | What is a Database?

What is a Computer Server? | Function of a Server