Millie is currently working in tertiary education, whilst completing her master's degree in English Studies.

In this lesson, we'll learn more about the time period represented in Arthur Miller's 'Death of a Salesman.' We'll also explore the ways in which the play's portrayal of the past frames its critical view of the American Dream.
Create an account

Imagine how different your life might have been if you had been born 150 years earlier than you were. Also imagine what it would have been like if you had been born in a different country. As you might realize, the time and place in which we live have a huge impact on our daily lives. Whether it is something small, like the fact that you have Internet, or the fact that you might be able to attend a public school, our experiences are strongly based on the context in which we live. Similarly, when studying a piece of literature, we are working with a text which was written at a specific time and place. As such, texts are often able to tell us a lot about the context in which they were created. 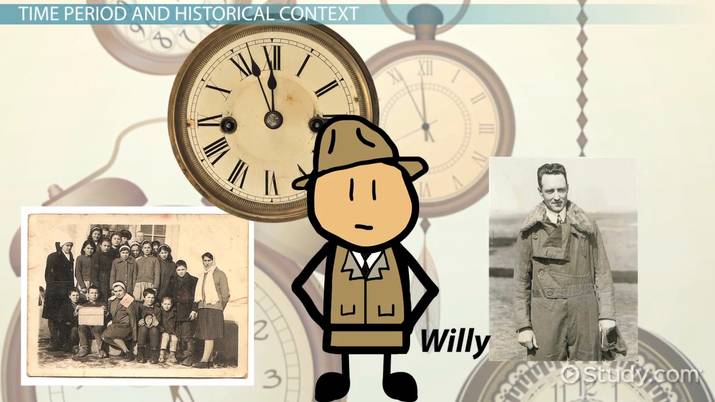 Coming up next: Capitalism & Marxism in Death of a Salesman

A time period can be defined as a stretch of time that is bracketed off for a specific purpose. When thinking about the time in which the story of Death of a Salesman is set, these events play out over the final 24 hours of Willy Loman's life, with the 'Requiem' being set a few days after his death, at his funeral. Let's think about the historical context (the general cultural state of its setting in both time and place) of the play. We can assume that the date is somewhere between 1945 and 1949. We know that the story is set in New York City in America, since Willy's wife wants him to ask his boss whether he can't work in their hometown of New York (in addition to the other mentions of places in America where Willy has gone for business). Therefore, we know that the historical context is linked to American history in particular.

Even though the play's events unfold during the mid to late 1940s, it is clear that Miller is very interested in the influences of the past. This is clear because, as you know, events in the play's present are disrupted when characters and events from the past move onto the stage. These instances seem to represent Willy's memories, rather than being 'flashbacks' where the entire time-frame of the play would change. The audience can see this since Willy's character does not get replaced by a younger version of himself on these occasions. From this it is clear, however, that the past has a strong influence on Willy's current perspective on things, so we need to consider not only the historical context of the play's present, but also how the time period represented by these past events has had influence on our understanding of 1940s America.

Since we know from the characters' conversations that Biff is 34 years old in the play's present timeline and, since the play suggests a link between Biff's loss of enthusiasm and his discovery of Willy's affair when he was 17 years old, Willy's memories of a better time are most likely linked to the late 1920s or early 1930s. As such, when looking at the historical context of the play, we need to think about the relationship between these two time periods.

After World War II ended, America went through a phase of great economic prosperity and even greater national pride. At that time, the American Dream meant suburban houses with white-picket fences, glamorous house wives, happy families, respectable fathers, and fancy new appliances and cars. It was then that the materialism and consumerist culture that we find throughout the world today really developed. And yet, if you think about the way in which the play represents life for the Loman family, we see that they have none of the ideals of the American Dream. So why does Miller seem so skeptical of this ideal? The answer to that question might be linked to the play's interest in the past.

When the Great Depression hit America in the early 1930s, Arthur Miller's family's lives were changed for the worse. His father's clothing business suffered, and the family had to move to a less expensive neighborhood. Theirs was not an isolated case. Many people were struggling financially, and as you can imagine, few would have been able to afford luxuries at this time. Those people who were fortunate enough to keep their jobs realized that working hard did not necessarily mean that you could live comfortably. The American Dream seemed an impossible ideal to many.

Death of a Salesman: Implications

When we look at the thematic interests in the play, the entire work is characterized by skepticism toward the American Dream. Willy seems obsessed with the idea that his sons, like his brother, should go out into the world and make a success of themselves. Yet we know that Biff is unable to keep a job, largely because he keeps stealing from his employers. We also know that the family's car and appliances keep breaking and that they are almost always in debt. By giving his audience a sense that the ideal is just a fantasy (much like the many other fantasies and delusions that the family try to maintain throughout the play) and that the reality is far more grim, we can say that Death of a Salesman is a text which criticizes the historical context of the 1940s.

The Loman family become a metaphor for a society which Miller believes is in denial about its reality. Many historians today will tell you that the materialism and consumerist culture of the 1940s served to distract people from greater global political unrest. Miller's choice of a salesman as his main character perhaps points us to his interest in the economy of the time, yet it is clear that the playwright questions the true value of materialism, since Willy not only struggles to sell things but is also struggling to pay off his debts.

Although Death of a Salesman is set in the 1940s, the play has a clear interest in the influence of the past. In this we can see how Miller's own experiences during the Great Depression made him skeptical of the materialism and consumerist culture which was a part of the American Dream during the 1940s. Miller uses the Loman family as a metaphor through which he is able to show the contrast between the American Dream and the reality which many people faced.

Death of a Salesman: Setting & Genre

Realism & Expressionism in Death of a Salesman

Monologues in Death of a Salesman

The Woman in Death of a Salesman: Analysis & Significance

Flashbacks in Death of a Salesman

Literary Devices in Death of a Salesman

Death of a Salesman: Ben Quotes

Charley in Death of a Salesman: Character Analysis

Father-Son Relationships in Death of a Salesman

Rubber Pipe in Death of a Salesman

Linda in Death of a Salesman: Character Analysis

Tragedy in Death of a Salesman

Ben in Death of a Salesman: Character Analysis

Characterization in Death of a Salesman

Death of a Salesman: Act 2 - Summary

Howard Wagner in Death of a Salesman: Character Analysis

Death of a Salesman: Themes & Symbols

Willy in Death of a Salesman: Character Analysis