In adolescence, the brain hasn't fully developed yet, which can be a factor for teenagers to often behave in reckless ways. Explore how brain development leads to risky behaviors and poor decision-making in adolescence, including the brain systems involved and the evolutionary reason for risk-taking in adolescents. Updated: 09/29/2021
Create an account

Tommy is 17, and his parents are very worried about him. He's been in an out of trouble recently. He drinks alcohol and has done some drugs, he's gotten into several car accidents because he was intoxicated, and he's started skipping school. His parents are concerned because he's risking both his life and his future by acting so recklessly. Tommy isn't alone. Many people in adolescence, or the time between childhood and adulthood that lasts from age 13 to 20, engage in risky behavior and make bad decisions. They might drink or do drugs, like Tommy, or they might endanger their future by skipping school, shoplifting, or engaging in unprotected sex. All of these can have serious long-term consequences for the adolescent, so why would someone like Tommy engage in risky behaviors? Let's look at two reasons why adolescents tend to act recklessly: their brain development and the evolutionary theory behind risk-taking behaviors. 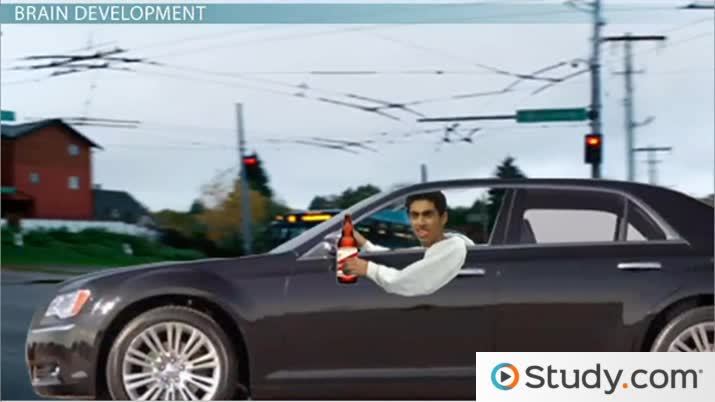 Coming up next: Social Development of Adolescents: Identity

Everyone, including Tommy, knows that doing drugs and driving while under the influence can have serious consequences, including death. So why on Earth would someone engage in that type of activity? There are many, many reasons why people might engage in reckless behavior during adolescence. One of the reasons might lie inside Tommy's head. The adolescent brain is not fully developed yet. The brain is still growing and changing and that affects the way that adolescents see the world and the way that they behave.

The brain is a complex organ and many different parts of the brain can work together to help a person do or feel something. These different parts of the brain working together are called brain systems. For example, the reward system of the brain makes a person feel good. Think about a time when you felt giddy with joy. Perhaps because you just broke your diet to eat a delicious piece of chocolate cake or perhaps because you just kissed your sweetheart. That emotional high that you feel is due to the reward system of the brain. Because of the great feelings people get from the reward system, they often do things that aren't good for them. For example, a person who is diabetic might still eat chocolate or someone who should be doing something else with his time might lie around and watch television.

But what about Tommy's behaviors? They seem to do the opposite; they put him in danger. So why would the brain develop the reward system before the control system? The answer to that lies in what happens during and near the end of adolescence. Many people end their adolescence as independent, autonomous adults. They move out of their parents' house and on their own. They establish themselves and their own lives independent of their family unit. Moving away from one's parents and into the big bad world on your own is risky. It's much easier and safer for someone like Tommy to stay in the house and protected world of his parents, but to be a fully-functioning adult, he has to move out and take the risk of being on his own. So perhaps the reason that the control system of the brain develops later than the reward system is that it allows adolescents to the take the risk of moving out on their own. The other risky behaviors that Tommy and people like him engage in are just a side product of that.

Adolescence is a time when many people engage in risky behavior. This might be because the reward system of the brain is proportionately more developed and active than the control system, which is not fully developed until adulthood. Evolutionary psychology explains this disproportionate development in brain development as a way of making sure that adolescents take the risk of becoming independent of their parents.