Patrick has taught intermediate science, language arts, and technology. He has a master's degree in educational technology.

Decomposers play a crucial role in keeping the Earth clean and healthy. Meet the organisms whose role is to keep the environment free of trash, dead animals, and natural litter, and how this benefits everyone, including other plants and animals. Updated: 12/28/2021
Create an account

Decomposers are small creatures in our environment that are like living garbage disposals. Do they eat plants? Yep. Insects? Yep. Large animals? Yep. They eat everything!

They sound pretty powerful, but they're usually very small and live on or in the ground. When something dies, the decomposers take over from there. They eat dead remains and are even known as nature's cleaners.

If decomposers didn't do their job, the ground would be covered in garbage, dead things, and disgusting junk. How do such small creatures eat so much? It does take some time, but there are many more out there than you might realize to do some of the tough jobs. You should be thankful that decomposers are so good at what they do! 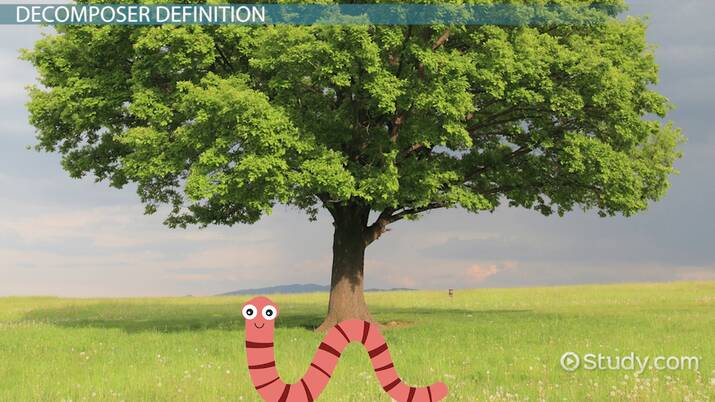 Try it now
Back
Coming up next: Coral Lesson for Kids: Definition & Facts

There are decomposers everywhere. You can find them in forests, prairies, swamps, the ocean, rivers, and many other environments. One familiar decomposer is an earthworm. You may see earthworms in the soil, especially near plants, gardens, and other moist areas.

Other types of decomposers include some insects. Have you ever noticed that when you're being pestered by flies, you're usually near animals, garbage, or dirty areas? These insects love waste, dead things, and dirty stuff!

Another living thing you might find near animal waste is a mushroom. A mushroom is a type of fungus; it actually lives and grows directly on its food. How convenient!

Most decomposers are actually too small to see. Many of them are called bacteria. Bacteria are very tiny living things that can live anywhere. Because they're so small, bacteria can get into very hard-to-reach places, including our bodies, which can sometimes lead to sickness. This is one reason why it's important to practice caution when you are near disposed waste and garbage. Ever see a rotten piece of fruit? This is usually caused by bacteria getting inside it over the course of a week or two.

As stated before, decomposers are our ''cleaner uppers'' of nature. However, they do far beyond that. Many of them actually create their own waste that is rich in nutrients. These nutrients are substances that are healthy for plants and the soil around them. So when you see worms in your garden, that is a good thing! Now let's look at the big picture. Since plants depend on decomposers for healthy nutrients, and all other animals depend on plants in some way, it's safe to say that without decomposers, all living things would die of starvation.

The Human Voice: Lesson for Kids

The Human Voice: Lesson for Kids