An intentional tort occurs when someone knowingly infringes on the rights of others. Learn the four defenses to intentional torts to avoid liability: self defense and dense of others, defense of property, consent, and necessity (public and private). Updated: 09/20/2021
Create an account

Let's say you are walking down a dark street and you suddenly feel the presence of a stranger following you. Then, without warning, he places his hand on your shoulder. Lock and load - you pull out your pepper spray and give him a long blast to the face and eyes.

The stranger may cry battery, but that won't get him very far. Battery means that there is an intent to cause bodily injury, and perhaps the pepper spray did cause injury.

Does that make you completely liable for battery? Not really! The law also states that there are several defenses used to defend intentional torts and reduce liability:

The law allows a person to act in self defense or defense of others if the person believes they are in imminent danger of physical harm and the physical defense must be reasonably necessary and not excessive. In the case of the stranger following you, the court would likely find pepper spray a reasonable defense against the stranger's touch.

Defense of property also allows for the use of reasonable force to stop a person from stealing or using private property. The courts do not favor the use of deadly force in property protection.

You will notice in each type of defense, reasonable force is permitted. Generally, this means force necessary to take back property or defend oneself without unreasonable measures, like taking a life.

However, there are times when the court will allow for deadly force. There are a few elements to consider:

So, if an armed person unknown to you enters your home through a window and you kill or seriously injure him, the court will look at the nature of the break-in and whether it was reasonable for you to fear for your own safety and the safety of others in the house. In this case, you would probably be justified in your actions. 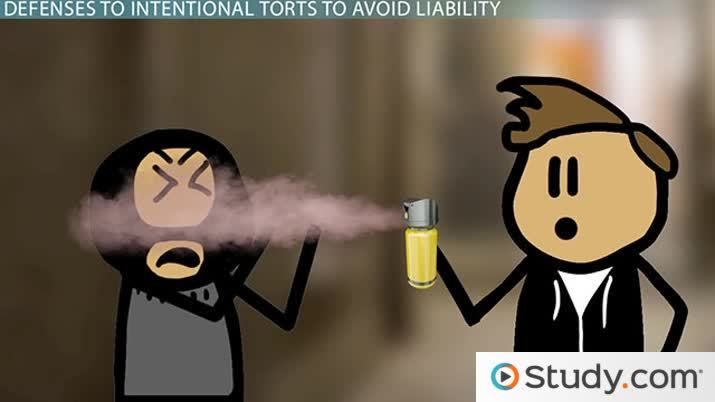 Coming up next: Negligence Torts: Definition and Cases

Unlike self defense and defense of property, two defenses that can be used to reduce risk do not involve violence.

Consent means permission was given by one person to another to do something that may ordinarily be considered illegal or wrong.

This may help. Suppose a stranger approaches you with what they claim to be a winning lottery ticket with $500. The stranger asks you to give him $100 for the ticket and you may keep the rest upon cashing it in. It sounds like a great deal, and you proceed with the transaction.

When you get to the lottery redemption center, you find that the ticket is actually not a winner and you are out $100 to the less-than-honest stranger. What makes this even more unfortunate than losing a bunch of cash is that the court may look at this as a consensual transaction!

Necessity can be used as a defense when a defendant takes control of another person's property, because taking the property served a greater benefit to the defendant, community or the defendant's property.

Two categories that may help to explain this defense:

In a public necessity defense, the defendant may claim his actions were justified because it served the community as a whole.

Think about a burning kitchen in an apartment building. The fire department may cut through the front door and use excessive force on walls and cabinetry to control the flames. They may also spray down walls with water, causing stains and even damage.

The owner of the apartment may not be able to recover for damage sustained to the personal property or the apartment itself because it was a public necessity to control and extinguish the fire. After all, the fire could have spread to other units, causing a major disaster for the community.

A private necessity is similar in theory. The difference lies in the completeness of the defense. To say it a different way, in a public necessity defense, a defendant may claim that using a private person's property was necessary to avoid further damage to his own.

To make sense of this, let's use an example.

If a driver traveling on a two-lane highway notices a car headed straight toward him, he may decide to swerve. If the quick maneuver lands him skidding across private property, tearing up tulips and grass, the driver may claim that in order to avert disaster to his own property, he needed to swerve out of the way of the oncoming car. Driving on the manicured lawn may have been the only move he could make.

The court may consider this a private necessity. The driver will not get away scot-free. He will be responsible to pay for the damage to property. However, he probably will get away with any punitive damages for the mess he caused.

In a nutshell, there are four defenses one can use to avoid the liability of intentional tort claims:

One can claim self defense or defense of others if the person believes that they are in imminent danger of physical harm, and the physical defense must be reasonably necessary and not excessive.

If property is involved, a defendant can plead defense of property, and this allows for the use of reasonable force to stop a person from stealing or using private property. The defendant shouldn't shoot or kill or commit any act that may end in loss of life, because the courts do not favor the use of deadly force in property protection. However, reasonable force is permitted, and this means force necessary to take back property or defend oneself without unreasonable measures, like taking of a life.

Another type of defense that may be used is consent, and it means permission was given by one person to another to do something that may ordinarily be considered illegal or wrong, like sitting on the clay at a tennis tournament. If a fan was hit in the noggin by a not-so-well-served ball, the tennis player may claim consent on the part of the fan because he chose a seat where it is highly likely he will be struck by a stray serve.

Finally, there are times when it is just necessary to use someone else's property, whether public or private.

A defendant may use a public necessity defense if the defendant claims his actions were justified because it served the community as a whole. This may apply to trapping and destroying a rabid dog. A rabid dog presents danger to an entire community, thus destroying it benefits all.

Private necessity works the same way and when used, it generally serves a smaller group, like private owners of property. An example is breaking someone's car window to release a suffocating child. It couldn't be argued that saving a child is of lesser importance than the integrity of the window. The defendant may still be liable for the actual damage to the car but would not be punished for his actions.

Upon completing this lesson, you will be able to:

Battery: The Elements of an Intentional Tort

How Contract Conditions are Excused

Transferred Intent for Assault and Battery

Defenses for Negligence: Definition and Examples

The Mailbox Rule and Contract Law