Nouns and Gender in Spanish

Today we're going to talk about nouns and gender in Spanish. El libro, la mesa, el cuaderno, la ventana, el escritorio, la computadora… I bet you see a pattern! Nouns in Spanish automatically come with two things: gender and a definite article that agrees with that gender. As you may have noticed, el goes with words that end in -o, and la goes with words that end in -a, but before we continue… What is a noun, anyway? And word gender? And definite articles? What? 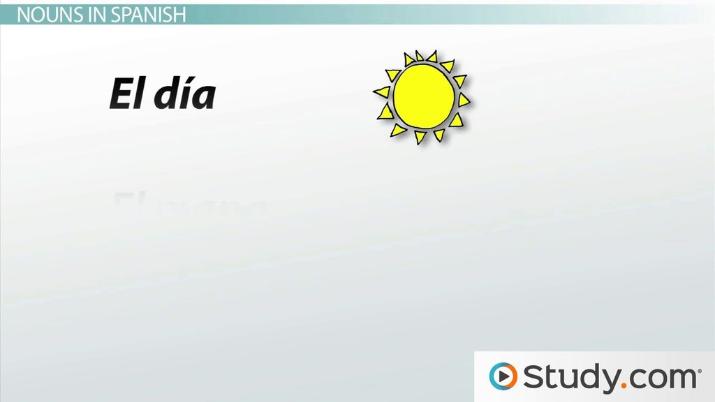 Coming up next: Making Nouns Plural in Spanish: Grammar Rules

First, nouns are words that name a person, place, or thing. A table, then, is a noun. Alisha is a noun. New York City is also a noun. In English, nouns don't have a gender - they simply are what they are. But in Spanish, nouns are either masculine or feminine.

Now, this has nothing to do with biology and everything to do with grammar. It's important to note that it is the word itself that is masculine or feminine, not necessarily the meaning of the word. For instance, vestido means 'dress' but ends in -o and is classified as masculine in the dictionary. Generally, however, nouns that refer to males are masculine (el hombre) and nouns that refer to females are feminine (la mujer).

But what about nouns that end in letters other than -o or -a, or nouns that break the rules entirely? Well, here are some hints to help you:

And then there are words that are exceptions to the rule but don't really have their own rules, either, like the following:

Now, on to definite articles. In English, we don't really think about it, but all nouns have the definite article 'the.' The cat. The dog. The hamster. In Spanish, though, as you have seen in this lesson, there are two definite articles - el or la - for singular nouns, depending on the gender of the word (masculine or feminine), and they always seem to be around. It's as if Spanish nouns were afraid to be alone - so much so that the el or la can be used with the noun without even meaning 'the!'

For instance, depending on context, el libro can mean 'the book' or just 'book.' La mesa can mean 'the table' or just 'table.' Nouns and articles in Spanish stick together a lot more than they do in English. If that ever confuses you when you're listening or reading, just try listening or reading the sentence again, taking out the 'the' to see if it makes sense the second time around.

Let's try some for fun. Vamos!

Let's try libro. What gender is it? Well, it ends in -o, so I bet it's masculine - el libro

How about escuela? Hmm...it ends in -a, so it must be feminine - la escuela

Do you remember the rule for words that end in -s, like país? Masculine - el país

Great! Now let's summarize what we've learned. All Spanish nouns are either masculine or feminine, and all have a definite article as their sidekick. The two singular definite articles are el or la, both of which mean 'the.' Most of the time, if a word ends in -o, -s, -or, or -ma, it's masculine, while the endings -a, -cion, -dad, and -ora denote a feminine noun. Of course, there are a number of weirdo words that break all the rules, like el dia, el mapa, and la mano, and have to be memorized, but this lesson will get you started.

Hay: Saying How Much & How Many in Spanish

Telling the Minutes 31-59: Time in Spanish

Estar: How to Use Estar When Talking About Location

Gustar: How Gustar is Used with Nouns in Spanish Grammar