Diedra has taught college English and worked as a university writing center consultant. She has a master's degree in English.

Daniel Defoe's novel 'Moll Flanders' is about a woman's adventures as she strives to improve herself amid a lifelong series of dreadful misfortunes. Explore a plot summary and analysis of Defoe's epic novel and learn about the background of Moll Flanders, the genre of this novel, and the themes that are woven within it. Updated: 09/15/2021
Create an account

You probably know someone whose life always seems like one adventure - or mishap - after another. Such was the life that Moll Flanders lived; whenever her life seemed to settle down, some misfortune stirred it up.

Moll Flanders was written by Daniel Defoe (author of Robinson Crusoe) and published in 1722. It is among some of the first works to be written in novel form, a lengthy fictional work written in prose. Because the novel had not yet gained wide popularity, the work is written as though it is an autobiographical report by Moll, herself. This pattern is seen in many of the early novels. 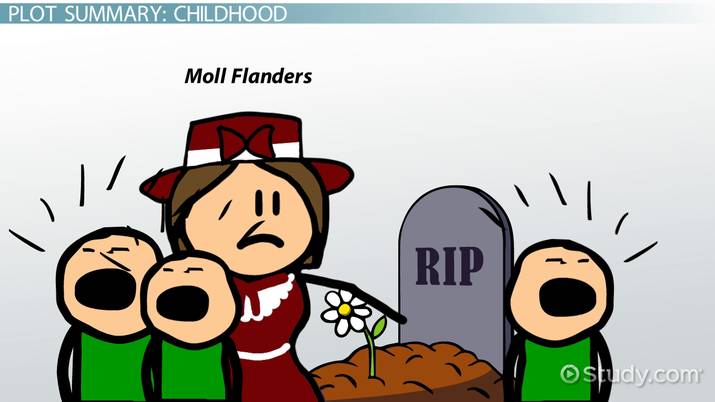 In the novel, Moll Flanders explains that her mother was an inmate of London's Newgate Prison and managed to escape execution by pleading for her unborn child. After Moll is born, her mother is transported to the penal colonies in America, leaving Moll in England.

In her early teen years, Moll's foster mother sends her to work as a servant for a wealthy family. As Moll matures, she catches the attention of the family's two sons. Interested only in satisfying his desires, the older son convinces Moll to live as his mistress; however, he refuses to marry her. Heartbroken, Moll marries the younger brother, and they have a few children during their five-year marriage. After her husband's death, Moll leaves her children with her in-laws and begins passing herself off as a wealthy widow in the hopes of catching a wealthy man.

Moll's masquerade finally works, and she marries a tradesman. Unfortunately, the tradesman enjoys spending more money than he earns, and he goes bankrupt and flees to the Continent. Before he leaves, the tradesman tells Moll to forget him and move on with her life, encouraging her to remarry.

Plot Summary: Back to Conning

Moll takes her ex-husband's advice and goes back to conning men. She finds a wealthy man visiting England on business. Moll happily accepts his marriage proposal, and he takes her back to his plantation in Virginia, where he introduces her to his mother. They lead happy lives for a few years. However, Moll hasn't managed to evade trouble; she begins to wonder about her mother-in-law and eventually discovers that the woman is her mother, making her husband her half-brother. Horrified and hysterical, Moll dissolves the marriage and heads for England, leaving her children in Virginia.

Having recovered from the shock, Moll sets up residence in Bath and once again looks for a husband. She eventually meets Callum Murray, a banker married to an unfaithful woman. He proposes to Moll, and she accepts. However, while waiting for Murray to get a divorce, Moll moves to Lancashire and marries a supposedly wealthy man. Soon after the marriage, Moll and her new husband realize that they tricked each other into marriage. Moll pretended to have a fortune to attract him, and he pretended to have money to attract her.

This new husband feels guilty for tricking Moll into marriage when he couldn't support her, so he tells her that she's under no obligation to stay with him. Moll, now pregnant with the man's child, hastily returns to London in the hopes of marrying Murray. She gives birth to her child before the marriage and leaves him with a country woman. Moll and Murray enjoy five happy years of marriage, but once again, trouble finds her. Murray becomes bankrupt and dies, leaving Moll broke and homeless.

Moll's situation looks desperate: she's not as young as she used to be, so she has a harder time attracting men. She also doesn't want to live in poverty by working as a seamstress, so she resorts to stealing. After honing her new craft, Moll is finally able to maintain the financial security she's always longed for. Unfortunately, Moll is caught in the middle of a robbery and sentenced to Newgate Prison.

In prison, Moll is reunited with her Lancashire husband. After passing a few miserable days in the dark dungeons of Newgate, Moll repents of her crimes. She convinces a minister of her sincerity, and she and her husband are transported to America. Upon arriving, Moll and her husband acquire a farm, and Moll reunites with her son, who helps Moll attain her inheritance from her late mother. Moll and her Lancashire husband live comfortably on the income from the farm for many years.

Moll Flanders belongs to a genre that enjoyed widespread popularity in Europe in the 17th and 18th centuries. The picaresque novel centers on a picaro, or rogue, and follows his or her life. The story generally takes the form of a first person autobiography and has no discernible plot, instead presenting events as a seemingly endless series of adventures, as is the case with Moll Flanders. As the rogue in the novel, Moll comes from a low social class and rarely holds an honest job.

The desire to be wealthy is what sends Moll into her life of morally questionable choices. Instead of making an honest but paltry living, she sets her sights on marrying a rich man. From con artist to mistress to thief, her struggles highlight the tension between morality and survival that still plagues humanity.

Several times throughout the novel, usually after something bad happens, Moll considers repenting of her actions and setting herself straight. However, her material needs and desires stand in the way of her repentance, so she continues in her deception and thievery until she finds herself staring at a noose. At the end of the novel, Moll repents to save her life and lives out her later years with few consequences from her crimes. This alludes to the book's Christian themes, especially that of the Christian God's eternal forgiveness.

Daniel Defoe helped to bring the novel form to popularity. Moll Flanders follows the rogue adventures of a woman desperately seeking to improve her fortunes, and this makes it part of the picaresque novel trend of the 17th and 18th centuries, a genre that follows a rogue throughout their life. In the story, Moll's only legal options were to support herself in poverty or marry and be supported by a husband. She cons several men only to be herself conned or caught, but eventually she repents her crimes and ends up in a quiet, stable life. The novel explores themes of desire and repentance, and her struggles highlight the tension between morality and survival that still plagues humanity.