Demographics are statistical data about characteristics such as age, race, and sex of a population in a given area of the world. Explore the demographics of Russia and Central Asia, looking primarily at the racial and religious makeup of countries that were once part of the former Soviet Union. Updated: 11/09/2021
Create an account

Demographics are numbers that tell you things about the people of an area and how they break down into groups. People love to put themselves in boxes: people have religions, ethnic heritages, nationalities, socioeconomic classes, political views, and many other things. The way these various boxes break down numerically is what we mean when we use the word 'demographics.'

Today, we're focusing on the demographics of Central Asia and Russia. We'll break it down country by country, starting with Russia, and continuing on to Central Asia, which includes Uzbekistan, Kyrgyzstan, Kazakhstan, Turkmenistan, and Tajikistan. 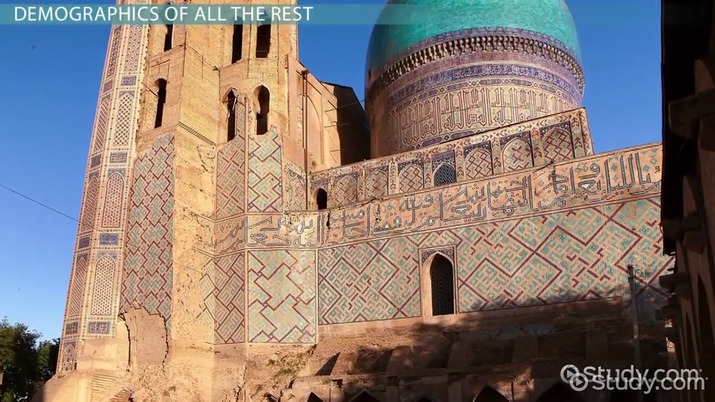 Try it now
Back
Coming up next: Cultural Patterns of Russia & Central Asia

Russia contains approximately 146 million people - the most populous country in Central Asia. When it comes to numbers, Russia isn't especially ethnically diverse, with 81% considering themselves to be ethnically Russian, according to the 2010 census. But nevertheless, in such a large area it shouldn't be surprising that there are still a lot of ethnic groups: around 190 in total. The second largest group after Russians were Tatars at 4%.

So, how about languages? Languages and ethnicities are related, but not always the same. So, it's worth us taking a look. While there are 100 languages spoken in Russia, 99% of the population speaks Russian, and 80% of foreign language speakers speak English. Many of the smaller languages are considered endangered.

When it comes to religion, it's pretty much Russia versus all the other countries. Russia is alone in being mostly Christian. Around 47% of Russians are Christian, with the majority of those being Russian Orthodox. This is followed by people who are 'spiritual but not religious' at 25% and atheists or 'non-religious' people at 13%. Muslims only account for 6.5%, which is kind of a big deal. Not because it's particularly surprising, but because of how different this is to the other countries we'll be talking about.

Kazakhstan is home to 17 million people, tiny compared to Russia, but not an insignificant number. Kazakhstan is more mixed ethnically, with 63% Kazakh, 24% Russian, and a mix of other ethnicities as of 2009. The people of Kazakhstan mostly speak Kazakh and Russian. Considering Russia and Kazakhstan are neighbors, this probably isn't too surprising.

All of the so-called 'stans' are primarily Muslim countries. But Kazakhstan is by far the most religiously diverse, with only 70% Muslim. The rest are mostly Russian Orthodox - there's the Russian influence again!

Demographics of All the Rest

Uzbekistan is the most populated country in Central Asia at 29 million. By comparison, Tajikistan, Turkmenistan, and Kyrgyzstan are all under ten million.

In all of Central Asia, Russian is a particularly common language in government, because of its importance to international relations and trade, and it is an official language in several countries.

Not counting Kazakhstan, none of the countries of Central Asia have much religious diversity. Uzbekistan, Tajikistan, and Turkmenistan are all around 90% Muslim, and Kyrgyzstan is close behind on 75%.

Demographics are numbers that tell you about the people of an area and how they break down into groups. Central Asia contains five countries: Tajikistan, Kazakhstan, Uzbekistan, Kyrgyzstan, and Turkmenistan. The area contains approximately 211 million people in total as of 2014, most of which is Russia at 146 million.

Russia isn't especially ethnically diverse, with 81% considering themselves to be ethnically Russian, according to the 2010 census. But there are still 190 ethnic groups in total. Kazakhstan is more mixed, with 63% Kazakh, 24% Russian, and a mix of other ethnicities as of 2009. Uzbekistan is mostly Uzbek at 80%, with small percentages of other groups. The other countries have mostly their own ethnicities, with sprinklings of Uzbeks and Russians.

When it comes to religion, Russia and all the other countries are quite different. Russia is alone in being mostly Christian at 47%, most of these being Russian Orthodox. All of the so-called 'stans' are primarily Muslim countries. Uzbekistan, Tajikistan, and Turkmenistan are all around 90% Muslim, Kyrgyzstan is close behind at 75%, and Kazakhstan is 70% Muslim. Christianity comes second in all of these countries, and is mostly Russian, or otherwise Eastern Orthodox. But regardless, there is clearly little religious diversity in the area.

Upon reviewing this lesson, you could take the opportunity to: