Personal and professional dynamics are influenced by the relationship between power and dependency. Explore the dependency of power, the impact of resource types on power, and their relationship to a negotiation process. Updated: 09/20/2021
Create an account

Jake needs to climb a tall, steep ladder 50 feet to get to the top of the roof. Below him is his employee, Donna, who is holding the ladder in place. Without Donna holding the ladder, the ladder will slip, and Jake - well, let's just say that he's not going to be too happy hitting the ground from 50 feet up. Now, Jake is almost at the top of the ladder, and Donna calls up to him, letting him know that he has not given her an answer on her request for more money. Jake hollers back that now is not the time to talk about it, and we can talk about it later. To which Donna replies, 'If we do not talk about it now, I am quitting, and you can get someone else to hold the ladder for you!' Jake, after taking all of about 10 seconds to think about how far down the ground is, grants Donna the raise she asked for, and the ladder stays where it is.

This example, while a little extreme, shows the relationship between dependency and power. Jake was dependent on Donna for holding the ladder and had to bow to her power because it could mean a trip to the hospital if he didn't. Dependency and power are tied together in many business aspects, and it is vital we understand this relationship is present. 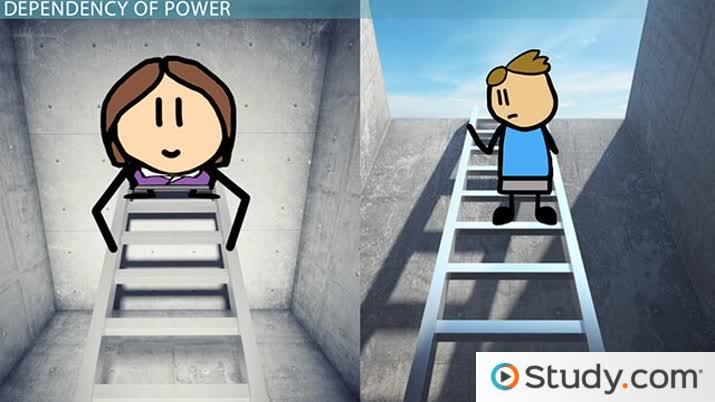 Coming up next: The Seven Influence Tactics Used in Organizational Behavior

To say that Donna had some serious power over Jake is an understatement. The type of power she had was based on the resource that she had, which was holding the ladder in place. You see, the relationship between dependency and power is centered on three main areas as they relate to the sources involved.

Importance: How crucial the resource is to achieving the desired output directly relates to the amount of power it has. In the case of Donna and Jake, the importance was pretty high. Primarily because, well, if she was not there, then the ladder would slip. Jake needed her. She was, thus, a resource (a person holding the ladder in this case), who was irreplaceable at that time. Jake had to bow to her power because it was critical to his success and desired output (which was reaching the roof without the ladder slipping).

Scarcity: When there is not an abundance of a resource, we say the resource is scarce. Let's go back to Jake and Donna. If Jake was on a ladder in a 20-mile-square parking lot, and there was no one else around to help him besides Donna, then Donna as a resource was scarce. Thus, the importance of her as a resource went up because there was no one else around. To help you grasp this a little better, think of an oil shortage or crisis. If suddenly the oil-producing states decided not to ship us oil, oil as a resource would become scarce, and, thus, whoever had possession of oil would have more power.

The Other Side of the Issue

We can begin to negotiate with the person that thinks they have the resource, and it is not needed as much as they think. We begin to negotiate and ask for concessions. Going back to our Jake and Donna situation, if there was another person standing next to Donna that could hold the ladder, then she would need to bargain or negotiate with Jake because her power was not as strong as it would have been if she was the only person there.

Dependency and power are interrelated. They work with and against each other all day in the business world depending on importance, or how crucial the resource is to achieving the desired output; scarcity, when there is not an abundance of the resource; and non-substitutable, when there is only one resource that will work for a given situation. The amount or presence of these aspects directly impacts just how dependent a person will be on the individual that has the resource (or the power). The goal is to try and have a position of power in every aspect of business, but as we have seen here, sometimes that does not happen, and negotiating or bargaining can occur. Just think of Jake on that ladder and what circumstances would have been in place for Donna to have to negotiate with him.

Dependency as a Source of Power
Related Study Materials

What is Job Satisfaction: Definition, Causes and Factors

Uses of Derivatives in Portfolio Management

Observational Research Method & Techniques | What is Observation in Research?