Not all countries have reached the level of industrialization of the United States and Europe. Dependency theory offers an explanation of this phenomenon. Though out of favor with modern scholars, this theory still helps fill in the gaps between competing theories.
Create an account

A common term used in the news and social media today is the 'developing world'. This term is used to indicate countries that are less economically developed than the United States or European nations. The term is an odd one, isn't it? It suggests that there is a process that leads to economic development, and the expectation is that eventually all countries will become industrialized. A number of sociologists and economists, however, believe that this is not the case, and instead they developed dependency theory. Nevertheless, due to some of the major objections to dependency theory, it has fallen out of favor among today's sociologists and economists. Still, elements of dependency theory exist today, and it may prove useful in an understanding of current social trends. 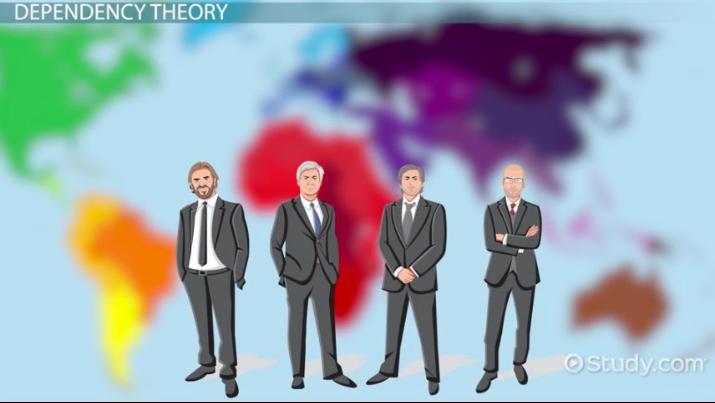 Dependency theory is a sociological theory which holds that economic events in history have encouraged developing countries to depend upon the support of more advanced nations. This dependence prevents developing nations from fully creating institutions and infrastructure necessary for their full transition into industrial nations. This process can take many forms for the developing country. However, it might be better to talk about dependency theories, as there are a variety of different theories with similar themes.

In a historical sense, dependency theory looks at the unequal power relations that have developed as a result of colonialism. In the colonial period, newly industrialized colonial nations expanded into areas that were unclaimed by other colonial powers. The result was that the natural resources of less-developed nations were used to fuel the colonial nations' factories. The methods used by imperial powers often involved direct military and political control.

Colonialism collapsed after the Second World War, but its legacy continued in the form of neocolonialism. International finance and capitalism became the preferred methods of control over developing nations. As a result, many underdeveloped countries now owe developed nations a significant amount of money and cannot shake that debt. Others suffer from a reliance on importing finished goods and exporting natural resources.

Issues are found with nearly every theory, and dependency theory is no exception. As we discussed a moment ago, one of the major issues with dependency theory is that its adherents rely upon different theoretical frameworks. Some rely upon Marxist critiques of capitalism. From the Marxist view, the inequality of wealth distribution is part of the function of capitalist business. This makes development partly reliant upon global events.

Other dependency theorists rely upon Latin American structuralist approaches, like those of the ECLA (Economic Commission of Latin America). Through this type of analysis, it is the developing nation's lack of infrastructure and other mechanisms for distributing wealth that are responsible for the economic state of dependency.

In both situations, the government of the developing country is urged to take greater control of commerce. This leads us to the objections that most economists have with the theory, objections to government control over business. Detractors argue that government control tends to lead to corruption in business, which has costs in terms of productivity and sustainability. The fall of communism at the end of the 20th century led to government-centered solutions falling out of favor with many economists. The development of other theories, such as neoliberal and statist approaches, have caused dependency theory to fall out of favor as well. In order to better understand these rather abstract theoretical frameworks and perspectives, and dependency theory in general, let's discuss some examples of the theory in action.

Brazil would seem to be a typical case of dependency. Settled by colonial Portuguese, its native population was oppressed by the newcomers, and African slaves were brought in to harvest sugarcane. Most people currently living in Brazil are descendants of the Portuguese and the Africans. Modern Brazil is one of the world's fastest-growing economies, but it has taken some massive infusions of money and government intervention to make it that way. Despite the economic growth, many Brazilians (roughly a third) still live in impoverished conditions in the favelas (slums) connected to most modern metropolitan areas.

One of the best examples of this can be seen in the vibrant city of Teresina. Unfortunately, Brazil has had record growth of its economy, but the money doesn't seem to be reaching the people who would most benefit from it, which leaves credence to some of the structuralist theories of the ECLA.

North and South Korea are an interesting, if unique, case. Both are former possessions of the Japanese Empire with similar resources and populations. South Korea is essentially a modern industrialized nation while North Korea hasn't kept up. North Korea is one of the cases economists point to in order to assert that tighter government control over business causes problems. The main difference between North and South Korea has been in terms of government involvement in the economy. North Korea's economy is closely monitored by its government, while South Korea has a more market-driven economy. However, South Korea is far from a clear-cut case against government intervention as the government has taken control-based actions to protect its industries, such as offering monetary incentives to its electronics and auto manufacturing industries during a period of global-based economic growth.

On the surface, South Korea's economic boom when compared to North Korea's slump seems to support the notion that too much government can ruin business though the Korean case may be more about how government intervention can be helpful as opposed to harmful.

Many parts of the world have difficulty living up to modern industrial standards. Among the variety of interpretations, dependency theory focuses upon how the relationships between developed and developing countries foster inequality. Different versions of dependency theory exist, and they explain this inequality in different ways. Some of the problems with dependency theory include these different approaches, which may or may not explain a situation well. Another set of problems involves questions concerning how to solve the issues of dependency. Brazil and North and South Korea offer different examples of dependency and possible solutions to it.

After you finish the video, make a goal to:

Gender Differences in the Older Population

Social Characteristics of an Aging Population

Theories of Aging and Death: Programmed Theories vs. Damage Theories