View bio
Astronomy is the study of space, celestial bodies, and the relationship of the universe to Earth. Explore the development of astronomy, how ancient people used astronomy, and the tools that they developed to study the stars. Updated: 01/19/2022
Create an account

The Appeal of Stars

Pretty much all of us look up at the stars with wonder, amazement, and awe. Many of us get really excited when an eclipse is about to occur somewhere near us or when there's a meteor shower. Honestly, who hasn't wished upon a star? Admit it, you have, and probably a dozen or so times.

And really, in the grand scheme of things, humans haven't changed that much at their core over millennia. Like us, ancient people the world over looked up at the stars for many of the same reasons. And they even studied their celestial behaviors like we do today.

Let's find out more about this as we go over some of the ways astronomy developed in the ancient world. 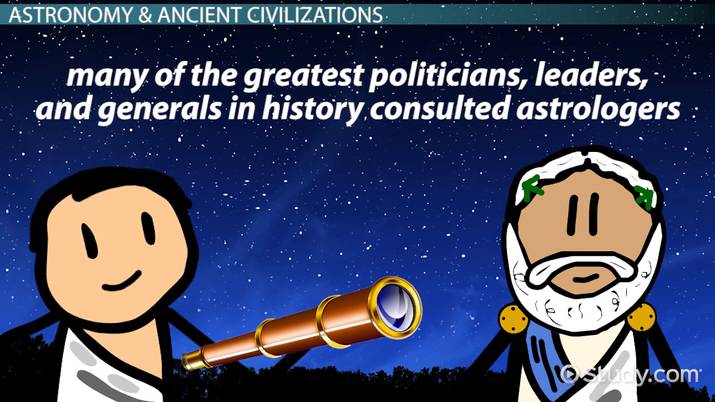 Coming up next: Telling Time in Ancient Times

Astronomy is the branch of science that studies the universe and its celestial bodies, like planets and stars. There were several major reasons why ancient people studied and cared about astronomy. Let's delve into some of the ways astronomy related to different aspects of ancient civilizations.

One extremely important reason ancient astronomy was significant was that it allowed ancient people and civilizations to keep track of the passage of the seasons. This, by extension, meant they could better time when to plant or harvest crops. So astronomy was important for the development of more advanced forms of agriculture.

Astronomy also helped ancient people develop calendars and other time-keeping methods and devices. Why was this important for ancient civilizations? Well, if you had a way to keep track of time on a smaller scale, you could develop a much stronger economy by way of improved trade. If merchants could coordinate with other merchants using precise time-keeping devices, then far more intricate systems of trade and economies could develop over time.

And here's a third big reason for why ancient people cared about astronomy: religion and politics. Ancient priests knew at what time certain celestial events would be likely to occur. This would allow them to yield great power in holding impressive festivities tied to astronomical phenomena. After all, if they could predict such phenomena, they must be pretty special, right? Thus, astronomy helped priests in many civilizations become part of a powerful elite. Astronomy was, in part, a reason for how and why civilizations became stratified in terms of classes.

Politics comes into play as well. For example, ancient astronomers in the Roman Republic were sometimes in cahoots with Roman politicians seeking to extend their stay in office. The astronomers would adjust the Roman calendar to the seasonal year in order to suit the politician's desires by, quite literally, extending the year for everybody at whatever point they wished. This would automatically extend the politician's stay in office.

Finally, there's astrology. Ancient people, like people today, cared about astronomy because they believed the motions of celestial bodies predicted, in part or in full, future events and the behaviors of people. So people looked up at the stars in hopes of getting a glimpse of the future or for explaining complex things they couldn't grasp. And you better believe that most of the greatest politicians, leaders, and generals in history consulted astrologers, who were often the astronomers of the day as well, for an answer to one question or another. Julius Caesar was a rare and notable exception. These predictions, if you will, sometimes influenced the decision to wage war or not and thus whether civilizations were disrupted or not.

Ancient astronomy also helped pave the way for the modern scientific method, the professional way by which scientific phenomena are observed, described, predicted, and tested. Ancient astronomers had to observe, record, and describe the movements of celestial bodies in order to predict celestial events or to maintain their ancient calendars.

They did so with numerous different tools and techniques, such as sundials, which helped measure the hour of a day based on the sun's position in the sky; astrolabes, which was used to help take astronomical measurements; and calendars, which we covered earlier. In addition, massive monuments, possibly including Stonehenge or many of the pyramids around the world, helped keep track of some celestial movements. They also have acted as some type of homage to certain celestial events. Finally, we have math. Yes, math! You better believe ancient astronomers relied on a hefty dose of pre-calculus-based mathematics.

To recap, astronomy is the scientific study of the universe and its celestial bodies. Ancient astronomers studied the motions of these bodies for agricultural, trade, and economic reasons. Astronomy also helped develop calendars and, thus, helped merchants time their activities. Religion and politics played a role too, since the knowledge of astronomy helped priests become quite powerful in many civilizations. Astrology was part of the development of astronomy as well. Ancient people believed that planetary and other celestial motions and events influenced the future and people in general. Ancient astronomers used everything from the sundials to know the time the day to astrolabes for astronomical measurements.

This activity is linked to the lesson on the development of astronomy in ancient history. For this activity, complete the crossword by filling in a word that fits each of the given clues. You can right-click the crossword to save the image and print it. With a pencil and an eraser, neatly write your answers in the boxes provided.

3. A term that relates to the sky or outer space as observed in astronomy.

6. Prediction about human affairs or natural phenomena from the relative positions of celestial bodies.

7. An instrument to help take astronomical measurements such as the altitude of the Sun and stars.

8. Astronomy provided a guide for planting and harvesting crops because the motion of celestial objects allowed ancient people and civilizations to keep track of the _____.

9. The planetary and other celestial motions and events are thought to influence the _____.

1. Ancient people regarded astronomy to play an essential role in _____.

4. It is known as the study of the physical universe beyond the Earth's atmosphere, including the stars and planets.

5. An ancient group of standing stones that are thought to have helped keep track of some celestial movements.

7. Modern scientific methods were further established through the works of _____ astronomers.

Ptolemy Theory of the Universe: Lesson for Kids

What is a Lunar Eclipse? | Models, Examples, and Frequency