Writing accompanies advancements in civilizations. Explore the development of written language in ancient China, including the earliest potential writing, writing during the Shang Dynasty, and the development of Chinese characters. Updated: 01/21/2022
Create an account

When asked to define the concept of civilization, many historians look to the advent of writing. Writing is one of the cornerstones of civilization, and perhaps nowhere was this more true than in China, which has long held a deep obsession with the written word, influencing its culture in forms ranging from poetry to imperial recordkeeping. 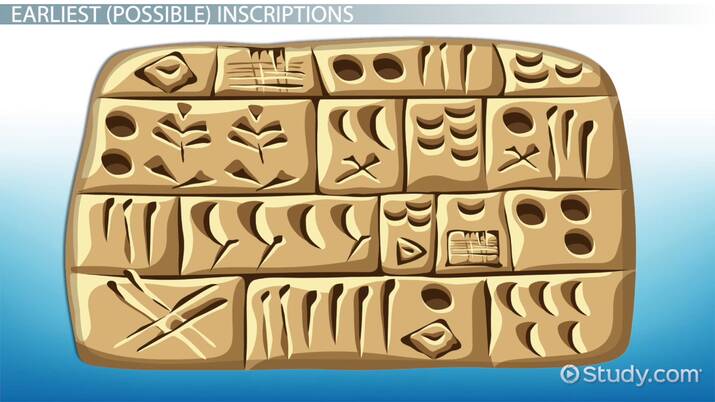 Try it now
Back
Coming up next: The Evolution of Language in Ancient Civilizations

So, when did writing first appear in China? That's a good question, and one which scholars have debated for a long time. There are some people who think that Chinese writing may have truly ancient roots, dating as far back as the Ban Po settlement, inhabited between 4500 and 3750 BCE.

At Ban Po, archeologists have discovered a number of pottery shards, which is pretty normal for a village of this time. What's interesting, however, is the frequent repetition of images and symbols inscribed onto these shards. While no one's been able to interpret them, some people think that these images are used consistently enough to represent a very early form of written language.

The Ban Po shards are interesting, but claims that they represent a written language are controversial at best. There just isn't enough evidence. Eventually, however, that ceases to be true. In the Shang Dynasty (1600-1046 BCE), a genuine written language bursts onto the scene.

So where do we find this language? Books, scrolls, the walls of tombs? Nope. The writing of the Shang Dynasty, China's first writing system, is found exclusively on bones. Why?

Shang society was obsessed over predicting the future, and had a special class of priests (or possibly priestesses) devoted to the art of divination. Here's how it worked: the diviner would write a question onto the bone of an ox shoulder or turtle shell, toss it in the fire, and wait for it to crack. The crack was then interpreted as either a yes or no answer to the question. So, in order for the divination to work, the diviners had to have a written language to use. This was China's first true system of writing. We call it Jiaguwen.

In all honesty, this ancient writing script was likely developed outside of just divining the future and may have been written on scrolls, wood, and even silk. Unfortunately, those rapidly decomposable materials have been lost to time so all we have left are the oracle bones, and there are quite a few of them. The Shang rulers liked knowing the future, and they clearly appreciated the nearly magical role of writing in the ritual.

So, what did Jiaguwen look like? Jiaguwen was a pictographic language, which means that each symbol represented an idea or object, not a sound. For example, the Jiaguwen character for a fish would not have represented the phonetic sounds of the Chinese word for fish, but instead represented a fish itself. As a result, most Jiaguwen characters look pretty similar to the things they represent.

The problem was that it was hard to make complete sentences this way. It wasn't efficient, and as the Chinese emperors began transforming writing into a tool for imperial recordkeeping, the written language needed to evolve.

From around 1000-700 BCE, Chinese society developed a pictographic script with new characters, some of which represented ideas and abstract concepts that help create sentence structure (not just physical objects in the world). The new scripts that emerged in this time began appearing on impressive bronze bells and plates that distinguish the era.

Following this, the Chinese script expanded into a number of regional variations and different styles. The person to unify them together was Qin Shi Huangdi, first emperor of the Qin Dynasty (221-207 BCE). Under the Qin, Chinese characters were simplified and standardized, becoming a single script that was utilized across China. Since the characters represented ideas, not sounds, this script could be used regardless of dialect and was instrumental in the founding of the true imperial system.

China's script continued to evolve, becoming less representational over time. By the Han Dynasty (206 BCE-220 CE), the pictorial aspect of Chinese characters was virtually gone. Interestingly, there are some Chinese characters today that can clearly trace their lineage back to the very first Jiaguwen pictographs, making this a language that is simultaneously ancient and constantly evolving. It's an irrevocable part of Chinese civilization and as much a part of China's history as anything else.

Chinese civilization is truly ancient, as is its writing system. While some claim that pottery shards at Ban Po contain proto-writing, the earliest definitive examples of Chinese writing are found on oracle bones of the Shang Dynasty (1600-1046 BCE). This ancient writing system, called Jiaguwen, was pictographic, meaning each symbol represented a physical object. Later scripts would become more abstract, using characters to represent a variety of ideas until a single script was standardized under the Qin Dynasty.

The Vietnam War: Help and Review
Start today. Try it now
The History of Human Language