View bio
The diathesis-stress model states that mental disorders develop from a genetic predisposition for that illness combined with stressful life conditions. Learn about diathesis and stress, then explore the protective factors that provide a buffer between people and mental illness. Updated: 09/27/2021
Create an account

Kathleen hears voices that aren't there, and she believes that she's a famous actress, even though she's never acted a day in her life. Other people notice that she acts oddly: she talks back to the voices only she can hear, and she's shocked when people don't recognize her as a star.

Kathleen is suffering from schizophrenia, a mental disorder that involves having hallucinations and delusions, among other symptoms.

Gene isn't like Kathleen; he's not hearing things or delusional. But, he is depressed. He's sad a lot and has lost interest in the things that used to make him happy. Not only that, he sometimes has trouble getting out of bed in the morning and focusing at work.

What could cause schizophrenia, depression, and other psychological disorders? Psychologists don't all agree. Some believe that psychological problems are primarily biological in nature; that is, they are caused by some underlying physical or neurological condition. For example, Kathleen's brain works differently from most people's. When she hears voices, the part of her brain that deals with hearing is active, as though she was actually, physically hearing someone talk.

Others believe that abnormality is mostly caused by a person's environment. They say that problems in a person's life cause psychological problems. Take Gene, for example: he and his wife are in deep debt, and they might lose their house to foreclosure. That could be causing his depression.

But, not all of those people will actually develop the mental illness they are predisposed to. Some will go on to lead happy lives and not end up schizophrenic, like Kathleen, or depressed, like Gene.

Some, though, will experience situations in their lives that increase the likelihood that they will develop the mental illness. If their life situation is serious enough, the combination of environment and biology will lead them to developing the illness.

Let's look a little closer at the diathesis-stress model, including the three main concepts linked to it: diathesis, stress, and protective factors. 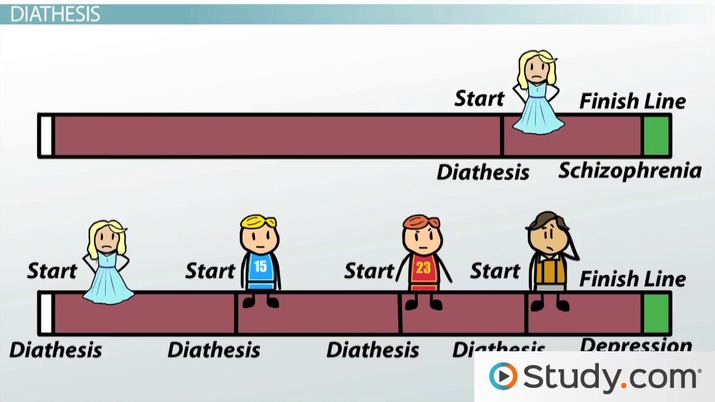 Coming up next: Lifespan Development and Vulnerability to Mental Illness

The first part of the diathesis-stress model is diathesis, or vulnerability to a mental illness. Think of this like the starting line of a race, and think of the finish line as a specific mental illness, like depression.

In this race, though, not everyone starts at the same place. Some people are miles and miles away from depression, while others are very close to it. Genetics and biology determine how close you are to the 'finish line' of depression.

Each person's diathesis for any particular mental illness is different from other people's and can be influenced by biology or genetics.

Not at all. Like a race, a person has to move past their diathesis to reach a mental illness. If Gene just stands around at his starting line and doesn't move, he'll never become depressed. Meanwhile, even though Kathleen is further away, if she races to the depression finish line, she'll get there eventually.

So, what makes a person move closer to a mental illness? That's where the second part of the diathesis-stress model comes into play. Diathesis, remember, is your vulnerability to a mental illness. It's your baseline starting point. But stress, or a change in condition that causes negative effects, can move a person closer to or further away from a finish line.

In short, the diathesis-stress model says that the combination of your diathesis and your stress is what causes mental illness.

Some things are obviously stressful: Gene's financial situation is a stressor that is making him feel very worried and upset. This moves him from his starting line closer to the finish line of depression.

But, stress is more than just emotional. Take Kathleen, for example: as a baby, Kathleen was exposed to a virus that made it more likely that her brain would develop differently from normal. This virus is an example of stress: it moves Kathleen beyond her genetic diathesis closer to the possibility of having schizophrenia.

So, stress can be emotional and caused by many things in your life, or it could be physical, like being sick or malnourished.

So, you've got your starting line (your diathesis), and you've got something moving you forward (your stress). Does that mean that you'll definitely end up with the mental illness you're predisposed towards?

Not necessarily. There is a third factor important in the diathesis-stress model. Protective factors are things that provide a buffer between you and a mental illness. Think of these kind of like a group of people who jump in between you and the mental illness and keep you from reaching it.

Prompts About the Diathesis-Stress Model:

In a paragraph, explain the diathesis-stress model and how it works to explain the origins of mental illness.

Tip: Consider the way biology and the environment work together.

Write an essay in which you answer and analyze the following question: If a person has a high diathesis for mental illness, does that mean that such person will automatically suffer from mental illness? Why or why not?

Make a list of the types of stress that can contribute to the onset of mental illness for someone who already has a high diathesis.

Make a list of the types of protective factors that can mitigate mental illness in a person who already has a high diathesis.

The Diathesis-Stress Model and Mental Illness

What Is a Behavioral Inhibition System?

What Is Attenuated Psychosis Syndrome?