Ferric oxide and ferrous oxides are both iron oxides and transition metal ionic compounds whose names denote the number of electrons lost by their respective atoms. Learn more about the differences in their nomenclatures, equations, colors, molar masses, and melting points. Updated: 11/30/2021
Create an account

Some cities around the country have names of streets, and others have numbered streets. Streets given names such as ''Oak Street' or ''Washington Pike'' don't give information about their relative location on the grid of a city map. Streets, avenues, and roads with numbers do. This is an analogy for the situation of the names of transition metal ionic compounds. The names ''ferric oxide'' and ''ferrous oxide'' are such compounds. Their names indicate which ion of iron is in the compound just like a numbered road or street tells us exactly where we are in a city grid.

The Latin name for iron is ferrum; therefore, the ferric and ferrous indicate the presence of iron in the compound. The -ic and -ous endings indicate the oxidation states of the iron ions in the compound. Ferric means the iron atom has lost three electrons to form Fe+3, and ferrous means the iron atom has lost two electrons to form Fe+2. Modern nomenclature uses Roman numerals after a transition metal's name to indicate what charge it has. For example, ferric would be Fe(III) indicating Fe+3, and ferrous would be Fe(II) indicating Fe+2. Let's look at how these two iron ions combine with oxygen. 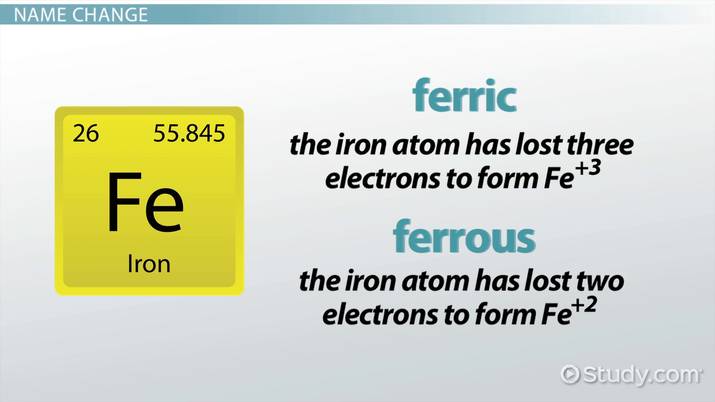 Coming up next: Copper I Oxide: Formula, Properties & Structure

Both versions of iron oxide are ionic compounds, which means they combine with negative ions in the correct ratio so that the compound is electrically neutral. Let's look at the equation for the formation of ferric oxide.

The formation of ferrous oxide is represented by the equation:

The difference in the ratios of iron to oxygen in these two compounds make for differences in properties of the compound. Let's see what these differences are.

The early Earth didn't have the oxygen rich atmosphere it does now. Iron(II) is water-soluble and was readily available for microorganisms to use to generate oxygen. As oxygen levels increased, the iron reacted with the oxygen to form solid ferric oxide. This caused the microorganisms to evolve to be able to acquire the iron they need. Ferric oxide is not soluble in water.

Early Earth had little to no oxygen in the atmosphere, and iron(II) was dissolved in ocean water. This allowed microorganisms to generate oxygen gas. When oxygen levels reached significant levels, iron reacted with oxygen, forming ferric oxide.

Sulfate Charge, Formula, & Structure | What is SO4?

Solubility of Common Salts | What Happens when Salt Dissolves in Water?