Anastasia has a PhD in Comparative Literature and Cultural Studies from the University of Connecticut. She has taught high-school and college English for over 20 years.

View bio
It's not always about what we write, but how we write it. In this lesson, we will learn all about the different kinds of tone and how to make sure that your written words achieve their desired effect. Updated: 05/27/2020
Create an account

The Importance of Tone

Okay, let's say that you're dining at a fancy restaurant with your parents and grandparents. You know, the white tablecloth sort of place where you can't wear your sneakers. Now, juxtapose that setting with your basement, hanging out with your best friends playing video games. Obviously, how we act and what we say at the fancy restaurant is going to be totally different than how we act and the language we use with our buddies.

Additionally, how we speak is going to be totally different as well. How loudly we talk, the pitch we use to say things, and the words we choose are all a part of something called tone. Tone, in essence, is all about attitude.

Let's say that you're upset that your friend is an hour late, and now you're going to miss the movie that you've been dying to see. Think about the different ways you would say the following sentence based solely upon your attitude:

Now, let's say that your friend was actually on time, and you will be able to see the movie:

What are the ways that you would change your vocal range between the two sentences to convey your attitude? How about your body language? Facial expressions? Intonation? 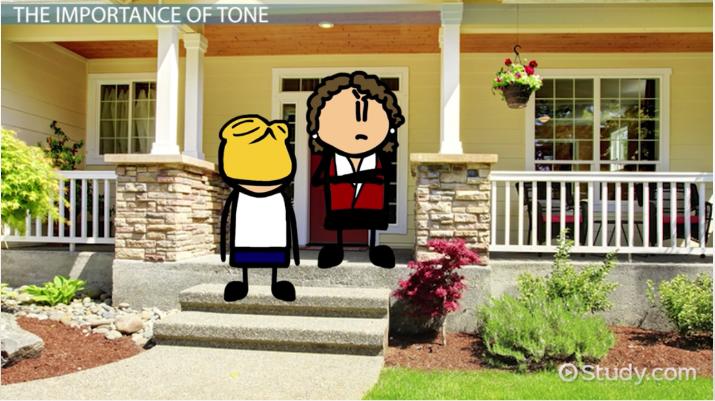 Tones for Specific Types of Writing

Of course, when you're writing, the reader can't hear your words; however, how we put our written sentences together and the words we opt to use will ultimately pass along the attitude, or tone, that we're trying to convey.

You have to decide if what you're writing, be it a college essay, journal entry, or letter to your friend, is going to be formal or informal. The best way to make this decision is by asking yourself, 'Who is going to be reading it?' If it's your teacher or it's a college review board, you're obviously going to be more formal with your words. You should avoid contractions, jargon, and slang. Don't use a conversational tone.

Now, let's say that you've been asked to write a reflection essay on your summer vacation for English class. This is still a formal five-paragraph essay; however, your tone will be less serious. Perhaps, you will take a humorous angle and tell an anecdote about running into your principal while on an island 3,000 miles away from where you live.

If you're writing a letter to a friend who is away at college, then obviously your tone is going to be light and informal. You're not going to worry about using idioms or slang references. You will be writing your letter almost in the same manner you would as if you were having a face-to-face conversation.

There are a million different kinds of tone. Here are just a few that you may want to convey in your writing:

Basically, if there is a human emotion, there is a type of tone for it.

Let's take a look at an example of how various emotional tones are conveyed. Each of the following four written sentences takes on a distinct viewpoint about how different members of the same team feel about losing the big state football championship game.

This tone was optimistic. 'There's always next year' is an extremely hopeful way of looking towards the future. The writer expects to be successful and won't let the loss bring him down.

Here, the writer's tone is angry. He is blaming others for the loss, and the word choice conveys resentment and bitterness.

Here, the tone is disappointment. Saying, 'I can't believe it's over and we didn't win,' is a clue that the writer is upset about the outcome.

This is a pretty objective way of looking at the game. The word choice is basically free of emotion and is matter-of-fact.

Tone is everything and conveys attitude. Your tone will change dramatically based upon what you're writing. A formal essay for history class and a letter to your BFF are going to have completely different tones. There are a million different kinds of tone in writing: everything from sarcastic to serious, to sincere, to happy, to depressed. Tone is not always easy to convey, so it's important to make sure you choose your words carefully so that the reader gets the desired effect.

Learning about the various tones used in writing via this lesson could prepare you to:

How To Create Tone in Writing:

Tone refers to an author's attitude toward the subject he/she is writing about. What the author feels about the subject is tone; however, what the reader feels is called the mood. A writer's attitude (tone) toward a character can be condescending, loving, sympathetic, ironic, or repulsive. All of these are words that describe tone.

How does a writer create tone? By choosing specific words to describe his characters or setting; by relying on syntax (words put together in a sentence); and by having a particular viewpoint or level of formality.

To get a sense of tone, choose a paragraph from several different short stories, for example, and analyze the tone created in each. Here are some examples:

"The Lottery" by Shirley Jackson

"The children assembled first, of course. School was recently over for the summer, and the feeling of liberty sat uneasily on most of them; they tended to gather together quietly for a while before they broke into boisterous play, and their talk was still of the classroom and the teacher, of books and reprimands..." (Jackson 2)

The tone in the above story is rather patronizing as though the writer knows all there is to know about the children. The "tell-tale" sign is the phrase "of course" in the first sentence. The tone in rest of the description is rather objective and gentle.

"In walks these three girls in nothing but bathing suits. I'm in the third check-out slot, with my back to the door, so I don't see them until they're over by the bread." (Updike 1)

The tone in the above sentences is informal. The point of view is key here as the story is written from a teenager's perspective who is both shocked and fascinated by the girls' appearance.

To get more practice identifying tone, pick up a couple different books and read passages and try to tell how the writer feels about what is described. In addition, you can also practice writing the same sentence and replacing one or two words to achieve a different tone. Here are some examples to get you started:

"The movie was amazing! I was laughing so hard I cried!" Vs. "You can only watch infantile humor for so long before you want to pass out."

"I am so excited that he called! I have been hoping to hear from him." Vs. "Why is my friend not calling me after all this time?"

Which of these TONE words would you use to describe the tone in the above sentences: sarcastic, distant, dismissive, honest, direct, honest, displeased, disparaging, or enthusiastic?

Tone in Writing: Examples | What Does Tone Mean?

How to Determine the Writer's Tone and Point-of-View

What is Audience in Writing? - Definition & Examples

The Writing Process Lesson for Kids

Understanding Tone and Mood in a Reading Passage

How to Analyze Settings in Literature: Explanation and Examples

Rhetorical Devices in The Great Gatsby

How to Support Your Claims in Writing With Reasoning and Evidence

What is Writing Style? - Types & Examples