Brittany is a licensed attorney who specializes in criminal law, legal writing, and appellate practice and procedure.

What Is Direct Evidence?

Chances are you've probably heard the word 'evidence' used a lot. Maybe you've found yourself engrossed in a hot crime television drama. Or maybe you've served on jury duty. Regardless of your familiarity with the criminal justice system, you may be surprised to learn that not all forms of evidence are created equal.

The term direct evidence refers to any piece of evidence that stands alone to prove an assertion. In other words, it provides direct proof of a fact and doesn't require any type of inference. The testimony of an eyewitness is the most common form of direct evidence likely to be presented at a criminal trial. When a witness relates something that he directly observed or experienced, he is offering direct evidence of an event.

Sometimes witnesses offer testimony that serves as circumstantial evidence of a fact. An example of this would be a witness who saw a suspect fleeing the scene of a crime. While the witness didn't actually see a crime being committed, his testimony may be used to create an inference that the suspect was involved in a crime.

Consider the following example that illustrates the difference between direct and circumstantial evidence. A hunter is taking a walk in the snowy woods. As he reaches a clearing, he watches a rabbit run into a hollow log. A second hunter enters the clearing and asks the first hunter if a rabbit has come by. The hunter's observation, the rabbit running into the log, is an example of direct evidence.

Now let's say that the first hunter, upon reaching the clearing, doesn't see the rabbit, but he does see rabbit-like footprints that lead up to the log. When the second hunter comes along and asks whether a rabbit has come by, the first hunter can only provide circumstantial evidence of the rabbit (the footprints) rather than direct evidence (seeing the rabbit himself). 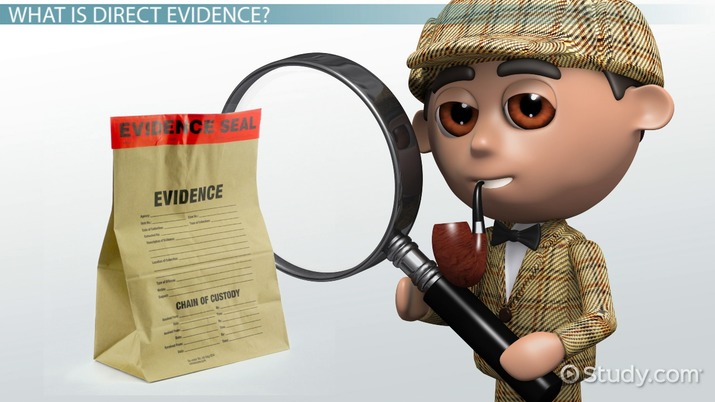 Coming up next: What is a Prosecutor? - Definition & Meaning

Laws Governing the Use of Direct Evidence

Many states require that certain forms of direct evidence, like the actual signed contract in a contract dispute, must be properly authenticated before they can be shown to the jury. In other words, there must be some proof that the evidence is really what the person admitting the evidence says it is. This is easier than you would think. Usually, all authentication requires is the testimony of a witness to attest that the evidence is authentic.

Nearly every state prohibits the use of direct evidence of other crimes or bad acts to be used against a defendant. This is known as character evidence. Character evidence is generally inadmissible as proof that the defendant is simply prone to committing crimes.

Examples in the Courtroom

As mentioned earlier in the lesson, the most common form of direct evidence is eyewitness testimony. Consider the following not-so-true story: Carl Criminal is on trial for attempted murder. The prosecutor calls Wanda Witness to the stand. Wanda explains that she was walking her dog around 11 o'clock at night, when she heard shouting coming from a nearby alley.

As Wanda peeked her head around the corner to peer down the alley, she noticed a tall, one-legged man pointing a small handgun at man wearing a red baseball cap. Frightened, she turned and ran. Wanda testified that she heard the sound of a gunshot as she reached the street corner. Which part of Wanda's testimony is direct evidence?

Wanda's testimony that she saw the one-legged man pointing a handgun at the man in the red baseball cap is direct evidence. What Wanda saw doesn't require any level of inference to make sense to a jury. Carl, who happens to only have one leg, is easily implicated in this scenario; there is direct proof that he, or someone who looked very much like him, pointed a gun at the man in the hat.

What about Wanda's testimony about the gunshot sound? Is that direct evidence? Because Wanda didn't directly observe the one-legged man firing the gun, the testimony that she heard the sound of a gunshot is circumstantial evidence. While it is certainly strong evidence against Carl, it's not proof that he shot the man. A second gunman could have appeared after Wanda turned away, for example. The jury must use logical reasoning and deduction to connect the sound of the gunshot with Wanda's observation of the one-legged man holding the gun.

What is Intellectual Property? - Definition & Laws