Disease control and prevention can be accomplished in many ways. Learn the different ways to control disease, about getting a vaccine, antiseptics and disinfectants, vector control, and using sanitation to fight disease. Updated: 09/23/2021
Create an account

Those of you who have played some first-person shooter games are undoubtedly aware of the many different weapons that may have been at your disposal. For example, you may have used a knife, gun, rifle, machine gun or even a bazooka to obliterate your opponent. Besides those offensive weapons, you may have used defensive techniques as well, by way of wearing protective armor or drinking a health potion to get your health levels back up to 100%. In a similar fashion, humans have many different ways by which we can prevent and control disease, as you'll find out in just a little bit. 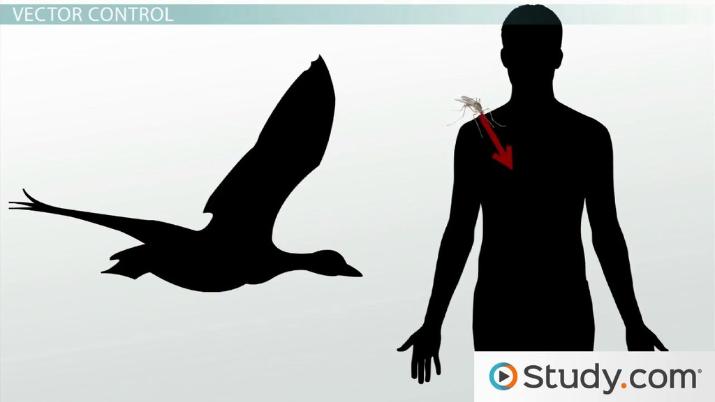 Coming up next: The Differences Between Infection and Disease

Before going out to do battle in your virtual game, you'll probably agree with me that you need to put on some kind of armor in order to protect your health. In the real world, the best armor we have to stop a pathogen, which is something that may cause disease and harm your health, is known as a vaccine. A vaccine is a preparation containing part of, or a weakened version of, a pathogen, which improves the immune system's fight against disease.

In essence, when you get vaccinated, you get shielded against whatever bacterium or virus was in the vaccine you got. The next time this pathogen hits you like a bullet would hit you in your video game, your health wouldn't suffer nearly as badly had you not been vaccinated, or shielded against, that pathogen.

After donning our armor, we need to select a few weapons to help us fight our deadly enemies - the viruses, fungi, bacteria and parasites that are out to get us. In the armory of the video game, you have a huge selection to choose from. I suggest we choose a wide variety of weapons. Let's take a knife, a flamethrower, and everyone's favorite, a bazooka.

Our knife is something that can cut a person and create a wound. If you've ever had a cut, you've probably used something like alcohol, hydrogen peroxide or iodine to clean up your wound. All of these compounds are known as 'antiseptics,' which are agents that kill most of the microbes on living tissue. By using an antiseptic, you helped to kill off potentially disease-causing pathogens that were trying to invade your body through a cut.

Besides the knife, you'll remember we're packing a flamethrower. The flamethrower we are going to use is specifically designed to kill off any monsters we may encounter in the video game. However, the flamethrower can't get any of the robots in our game since they are made up of metal and are flame-resistant. Therefore, the flamethrower is more of a disinfectant as opposed to a sterilant.

A disinfectant is something that kills most, but not all, microbes on an inanimate object or surface, while a sterilant is a substance that kills all living microbes on an inanimate object or surface. Therefore, because a sterilant is more powerful than a disinfectant, it is akin to the bazooka we are packing, which can kill everything from the smallest enemy to the toughest robot we may face in our video game.

The other reason we really need that bazooka isn't just to kill something, robotic or otherwise. No, we need it for far bigger purposes as well. Our knife and flamethrower are useless against the planes, tanks and choppers bringing our enemies into the battlefield. We must stop the transport vehicles from coming onto the field or we'll never win the battle.

The vehicles that transport our enemies, the pathogens that cause disease, are individually known as a vector. In real life, a vector is a living agent that harbors and transmits a pathogen to another living being. For example, a mosquito that drank the blood of a bird infected with a deadly virus will carry that virus in its body. After the mosquito bites a human, it will then transmit the virus to the human as well.

That mosquito is like the troop transporter in our game carrying soldiers, the viruses, within it. Once it lands on a human, the battlefield, it will release the viruses to attack us. That's precisely why we must engage in something called 'vector control', which is a process that eradicates agents of disease transmission, aka 'vectors.' There are many ways by which vector control can occur. For example, we may get rid of stagnant water that is a great breeding ground for mosquitoes, or we may use chemicals to fumigate an area to kill the mosquitoes.

Regardless of how it occurs, vector control is important in a mosquito-borne disease known as 'yellow fever.' In some cases, until a preventative vaccination for the disease can be given, controlling the mosquito population is of utmost importance to control the spread of disease. Keep in mind one important thing: A vector doesn't have to be just a mosquito or an insect. It can be any arthropod, mammal or bird.

In any case, after we kill all the monsters, vectors and robots on the battlefield, you will agree with me that the field will be littered with toxic metal equipment and disgusting, decaying corpses of hideous monsters. All the rotting, disemboweled flesh, feces, urine, blood and toxic metal on the battlefield can seriously harm not only the environment but our own health as well.

This is precisely why countries around the world use sanitation to clean up public messes big and small. Sanitation is the process of filtering water, cleaning sewage, neutralizing toxins and engaging in waste collection in order to promote public health. I think you'd agree that just like our morbid battlefield, if garbage, feces, dead animals and toxins flowed through our water pipes and city streets, we'd be all pretty sick, pretty soon. That's not a pretty thought at all. That's exactly why we use sanitation to help prevent and control the spread of disease.

As you can tell from this lesson, there are many ways by which we can prevent and control disease. We can prevent a disease by using a vaccine. A vaccine is a preparation containing part of, or a weakened version of, a pathogen, which improves the immune system's fight against disease.

We can control the spread of a pathogen that causes disease by using a variety of substances. Some of them are known as 'antiseptics,' which are agents that kill most of the microbes on living tissue. Others are called 'disinfectants.' A disinfectant is something that kills most, but not all, microbes on an inanimate object or surface. Further still, we can use compounds that are known as 'sterilants.' A sterilant is a substance that kills all living microbes on an inanimate object or surface.

We can also control the spread of disease by getting rid of vectors. A vector is a living agent that harbors and transmits a pathogen to another living being. A vector can be a mammal, bird or arthropod. That's precisely why we must engage in something called 'vector control', which is a process that eradicates agents of disease transmission in order to keep us healthy. Finally, in order to control outbreaks of disease, we also use sanitation to clean up public messes big and small. Sanitation is the process of filtering water, cleaning sewage, neutralizing toxins and waste collection designed to promote public health.

After you have seen this video, you should be able to see that there are many ways to head off disease through such things as vaccines, antiseptics, disinfectants, and sterilants, but the best thing for prevention may be as simple as sanitation.

What Are the Types of Diseases?

Parts of a Leaf: Lesson for Kids

Leaves Structure & Functions | What is the Structure of Leaves?