Terry has a master's degree in environmental communications and has taught in a variety of settings.

Protists are eukaryotes with a nucleus and are surrounded by a protective membrane. Some protists are parasites that cause harm to their hosts by leading to disease. Learn what protists are and what kind of harm protists can have on their hosts. Updated: 12/13/2021
Create an account

Anyone who has gone, say, camping at Acadia National Park or hiking in the Everglades knows that there are plenty of dangers in the wild. Venomous snakes, large cats, and big insects come to mind. But really, it's the microscopic things that you have to watch out for--you can't see them coming and, if they get you, they can bring you to your knees. Protists are specialists at doing just that.

Protists fall into an odd category of the living world: not quite animals, plants, or fungi. Instead, they comprise a kingdom of their own called Protista. Protists are eukaryotes, which are single- or multi-celled living organisms, each of which contains a nucleus surrounded by a membrane. They look like something you might find on another planet. But it's their tiny size and simple physique that actually make protists stealthy enough to bring down a human.

The diseases that protists inflict on humans are caused by those that are parasitic--they feed on another organism, causing harm without benefiting their host. Often, parasites use another organism as a vehicle to gain access to the host. The go-betweens linking parasites and hosts are called vectors. The vector may not be harmful to the host, but it does help the parasite reach its target. Examples of common vectors for protists include mosquitoes, flies, and drinking water.

In the following sections, we'll discuss some of the more well-known diseases that protists cause, from malaria to giardia. 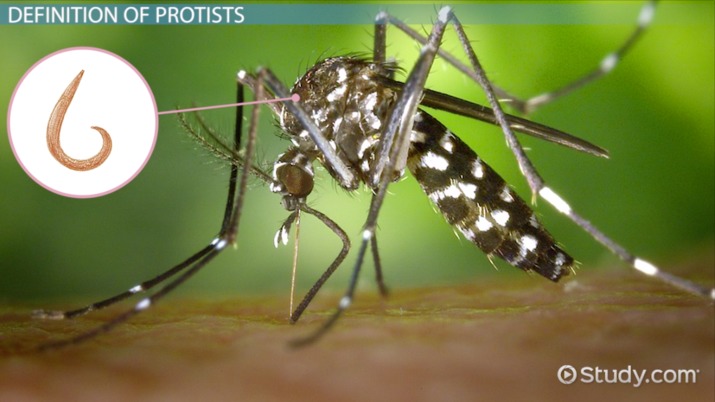 Coming up next: What Causes Degenerative Bone Disease?

Probably one of the most feared protists in the world is the Plasmodium, and it causes malaria in Africa and South America. Each year, there are 300 to 500 million new cases of malaria, and the World Health Organization reports that this number could increase by 60% by 2050, in which case the number of malaria deaths would rise to as much as 5 million per year.

When a person is bitten by a mosquito (the vector), the protist first makes its way to the liver, then infects the red blood cells. That would be enough to harm a person, but there is one more step--the protist bursts from the red blood cells. This action destroys up to half of the body's red blood cells, causing anemia, followed by a high fever as the body tries to fight off the effects. Headache, vomiting, fatigue, and joint pain are also part of the package.

Watch out for tsetse flies if you're in Africa--they're vectors for the Trypanosoma protist that causes African sleeping sickness. African sleeping sickness causes fever, headache, and joint pain, and once it starts to affect the central nervous system, the sleepiness kicks in. Ultimately, the infected person goes into a coma and dies. The Trypanosoma protist is particularly sneaky because it's able to change with each reproductive cycle as it spreads through its host, outsmarting that person's immune system and ability to fight the parasite off.

Another type of Trypanosoma protist causes Chagas disease in South America. Once it enters its host, the parasite aims for the heart and digestive tract. Malnutrition and heart failure ultimately doom the person unlucky enough to contract this disease. To make matters worse, the vector for Chagas disease is a bloodsucking insect: triatomine, also known as the 'assassin bug.'

People don't have to be in Africa or South America to become the victim of a parasitic protist. Giardia is a protist that causes giardiasis, and it lives all around the world. Insect repellent won't help protect you from this parasitic protist--giardiasis is contracted by drinking untreated water, often from drinking stream water in the outdoors. Giardia attach to the intestinal walls of their host, causing severe diarrhea, weight loss, and sometimes vomiting.

Some of them are parasites, which live on or in their host, causing harm to that host. Protists are often passed on to their host by way of a vector, which is a vehicle linking the protist to its host. African sleeping disease (caught via flies) leading to fever, joint pain and even a coma, and Chagas (caught via the 'assassin bug' a blood sucking bug in South America) are each caused by different types of Trypanosoma protists. Malaria is caused by a Plasmodium protist, which travels via a mosquito vector, while Giardia is found in untreated water.

What Is an Acellular Organism? - Definition & Examples

Angiosperms Characteristics & Examples | What is an Angiosperm?

How to Improve Validity of a Scientific Investigation

What is a Market Economy? - Definition, Advantages, Disadvantages & Examples

Continuous & Discontinuous Variation in a Species