In this lesson, we go over something known as the innovator's dilemma. It's something all major corporations should fear as it has led many of them to become dinosaurs.
Create an account

Not all that long ago, numerous very famous and well-placed people in the technology field had anything but nice things to say about the iPhone. Case in point: Steve Ballmer, CEO of Microsoft; he said the iPhone would never gain significant market share. Well, the rest is history, as is the Windows phone.

What happened here? It might have been a case of the innovator's dilemma. This lesson describes what this is in relation to disruptive technologies. 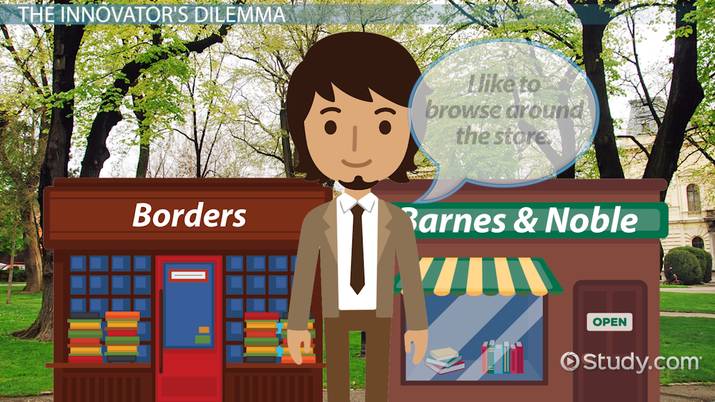 Rewind to the 1990s. The Internet is a disruptive technology, but one that is still in its infancy. Many people have no idea what email is. At this time, the biggest booksellers are Borders and Barnes & Noble. Their strategy revolves around many stores, allowing many customers to come, browse, and buy books. Why would anyone buy a book on this odd thing called the Internet without even looking at it? That's crazy, right?

Well, not to Amazon's Jeff Bezos. He saw a golden opportunity to make a lot of money, to take advantage of a disruptive technology the giants had spotted but disregarded. Within a span of just 20 years, Amazon would become a giant slayer.

For simplicity's sake, we'll stick to just using Borders as the counter-example to Amazon. Borders was a well-established, large bookseller. It had a lot of bills to pay, like expensive employee salaries. Borders almost certainly knew of the Internet. It even knew that it could be used to sell books. But Borders didn't enter the same market Amazon did until years after Amazon.

Why not? It's because, at the time that Amazon took advantage of the Internet, it was too expensive for Borders to enter such a tiny market with little profit in light of its giant expenses. We're simplifying things here, of course. But for Amazon, a tiny company with few expenses, the profits in what was a tiny market were enough to sustain itself and grow.

The problem for Borders? Amazon built up enough strength to eventually enter the mainstream market to outcompete Borders in the long run, who was now lagging behind in the Internet game. So the dilemma for Borders was:

1. Do we make the right management decision, right now, but risk being outcompeted by a start-up in the future? For the present moment (back in the 90s), the sound decision for Borders was to forego a market that's only going to lose them money and make investors very unhappy. In essence, it was a matter of focusing on doing what Borders does best.

The other part of the dilemma was:

2. Do we risk our bread and butter to enter a tiny market that might become big in the future, but one with little profit, in order to potentially save our future selves from this thing called Amazon? One can see how almost no one at Borders would've answered this question with, ''Yes, that's a great idea, let's waste millions on something that might never happen nor help us.''

So now we know that disruptive technologies can take down even the biggest of businesses. How can you identify these technologies in order to take advantage of them before they hinder your business? You must assess several facets of this technology in order to make sense of it:

The innovator's dilemma is a theory that explains why large, established organizations do not take advantage of potentially disruptive technologies and trends while newer and/or less-established organizations often do. It tells us, in a very simple version, that smaller and less established companies with fewer expenses can take advantage of a tiny market to make a profit, a profit that's then used to make inroads into a main market, one dominated by giants - giants who may have spotted the disruptive technology, but were faced with either:

Any business can better appreciate the chances a disruptive technology can hurt them in the future by assessing this technology's:

Functional vs. Dysfunctional Conflict in Organizations: Differences and Mediation

The Needs Theory: Motivating Employees with Maslow's Hierarchy of Needs