View bio
A divergent boundary is where two tectonic plates are moving away from each other, leaving a gap between them that can be filled with magma. Explore the definition and features of divergent boundaries, as well as examples in this lesson. Updated: 09/17/2021
Create an account

What is a Divergent Boundary?

You've just boiled an egg and are removing the shell. Suddenly; it slips from your hand and hits the floor with a crack. You pick it up to find the whole surface littered with lines and breaks. While nobody has ever dropped the Earth (as far as we know!), the cracked surface of the egg is just like the Earth's crust. While it might seem solid enough, it is actually broken into sections called tectonic plates. These plates float on a sea of hot magma. This magma is solid but becomes a liquid when it reaches the surface through volcanoes.

A divergent boundary, or constructive boundary, is where two sections of the eggshell - two tectonic plates - are moving away from each other. When this happens, they leave a gap in-between, and this gap can be filled by the magma from below. This creates a series of volcanoes all the way along the boundary. 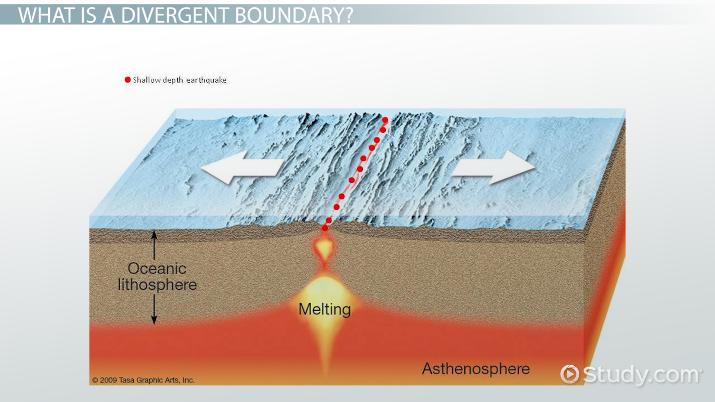 Try it now
Back
Coming up next: Hertz: Definition & Concept

Most divergent boundaries in the world today are between two oceanic plates. When these plates separate, the magma rushes up to fill the gap and creates underwater volcanoes. This is the creation of brand new crust! This crust can remain deep under the oceans, creating underwater ridges, or it can rise to the surface over time to form islands.

When two continental plates separate, it is theoretically possible for a similar thing to happen; volcanoes could form to create new crust. However, continental plates are far thicker than oceanic ones. Because of this, what usually happens instead is that a continent will gradually break apart, as water from the sea rushes in to fill the gap. By the time magma has a gap to fill, that gap is already deep underwater in a brand new ocean. This starts out as an enormous rift valley across the land, until that valley fills with water.

When one continental and one oceanic plate diverge, there can be features of both. It is more a matter of whether the boundary itself lies over an ocean or land than whether the plates are continental or oceanic.

The mid-Atlantic ridge is an example of a divergent boundary, where the Eurasian Plate that covers all of Europe separates from the North American Plate. This underwater mountain range is constantly growing as new crust is formed. Further up that same boundary, it passes through Iceland. There it forms characteristics of a continental divergence, and a rift is forming on the island. Eventually, Iceland will break into two separate islands, with sea in between.

The East African Rift is a continental divergent boundary in East Africa. It has been growing for the last 22-25 million years and is where the African Plate is separating into two new plates, known as the Somali and Nubian plates. Sometime in the next ten million years, the two plates will finally rupture and separate, creating a new ocean in between.

The Earth's crust is split into sections called tectonic plates. Divergent boundaries are where two of those plates are moving away from each other. When this happens, magma rushes up to fill the gap, creating brand new crust. Plates can be separated into two types: oceanic and continental. Oceanic plates are composed mostly of mafic or felsic rock, and continental plates are composed mostly of granitic or basaltic rock.

When two plates diverge, different things can happen depending on whether they are oceanic or continental plates, or more specifically, whether the boundary is over land or under water. When two oceanic plates diverge, underwater ridges and mountain ranges form, such as the mid-Atlantic Ridge. You can think of this like the formation of underwater volcanoes, though it is a more gradual process. Eventually these mountain ranges can rise above the water to form islands. When two continental plates diverge, great rift valleys can form. Those rift valleys would eventually lead to magma rising to form new crust also, but usually before that can happen, the continent breaks apart, and water rushes in to create a new ocean. If one is oceanic and one is continental, the exact characteristics depend on where exactly the fault line is positioned.

Once you've finished this lesson, you should be able to:

This activity will help assess your knowledge of the definition and examples of divergent plate boundaries.

True | False 1. The constantly-evolving Himalayas is an example of a divergent boundary.

True | False 2. At the constructive boundary, the plates move away from one another.

True | False 4. It is possible for two continental plates to separate and form volcanoes in between.

True | False 5. One of the most common rocks that makes up the seafloor is called basalt.

True | False 6. The location and shape of continents were all caused by the movement of the tectonic plates.

True | False 7. The Mid-Atlantic volcanoes are the constructive boundary between the North American and Eurasian Plates in the North Atlantic.

True | False 8. It is impossible for a continental and an oceanic plate to diverge and drift.

True | False 9. The complete separation of the Somali and Nubian plates is thought to create a new ocean in between.