Lesson Transcript
Instructor: Greg Chin
Nucleic acids are large biomolecules used to store, transfer and convey genetic information in cells. Explore the structure of nucleotides and what polynucleotide and phosphodiester bonds do. Updated: 08/15/2021
Create an account

In a cell, nucleic acids are represented by two separate yet equally important forms: the DNA that stores information in the nucleus and RNA that is used to translate that information into proteins. These are their stories.

Miss Crimson: Good day, ladies and gentlemen of the jury. My name is Miss Crimson, and I'm here to prove to you without a shadow of a doubt that my client, Colonel Custard, is not guilty of the most heinous crime of murdering poor Mr. Bones. The host of the International Cookbook Writers Convention was cruelly murdered with a lead pipe in a spiral staircase while on his way to deliver his award-winning cookbook to the kitchen. However, the defendant, Colonel Custard, was not responsible. The testimony of my expert witness will not only clear my client of all wrong-doing but will also reveal the identity of the true killer of our poor departed Mr. Bones.

Your honor, I call to the stand Professor Pear, an expert in DNA structure and function! Professor, could you please explain to us what DNA is?

Professor Pear: Why, yes. I'd be happy to tell you about DNA. DNA stands for 'deoxyribonucleic acid,' and it's a fascinating molecule. It's one of two basic types of nucleic acids, the other being RNA, or 'ribonucleic acid.' Nucleic acids are the molecules that cells use to store, transfer and express genetic information. 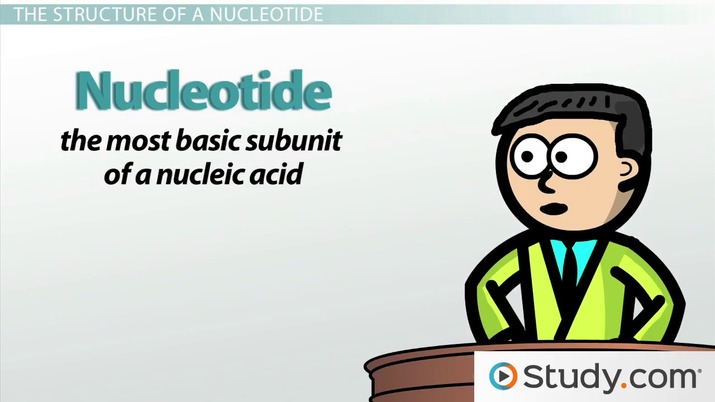 The Functions of DNA

Miss Crimson: That's very nice, Professor, but could you elaborate on the DNA molecule?

Professor Pear: Yes, yes, of course. It's the molecule that stores genetic information in an organism. It's essentially providing directions… like a recipe, if you will… for pretty much everything that makes us, well, us. If proteins are like the building blocks for structures, enzymes and other cool things in a cell, DNA is like a recipe that tells a cell how to create those building blocks.

Miss Crimson: So, you're saying that everyone has this DNA stuff inside his or her body?

The Structure of a Nucleotide

Professor Pear: Oh my, yes. DNA is an integral part of every organism, just like other types of organic molecules found in our body, such as carbohydrates, lipids and proteins. But the structure of DNA is very distinct from those other types of organic molecules. Deoxyribonucleic acid gets its name from the fact that DNA possesses a sugar called deoxyribose. That sounds like a fancy name, but really it's very easy to remember that it's a sugar like other sugars you may have encountered, such as sucrose and fructose. Just remember that all sugars end in '-ose.' A monomer of DNA is called a nucleotide.

Miss Crimson: Professor, can you please restate that definition in simpler terms?

Professor Pear: Oh, I'm sorry. A monomer is just the most basic subunit of a complex molecule. That makes the nucleotide the most basic subunit of DNA, or, more generally, of any nucleic acid. A nucleotide is composed of three things: a sugar (in the case of DNA, the deoxyribose I mentioned earlier), a phosphate group and a nitrogenous base. As you can see in this diagram, the phosphate group and nitrogenous base are both attached to the sugar. When a nucleotide is part of a polynucleotide chain, it is often referred to as a base.

Linking nucleotides together forms a structure that looks like half of a ladder that was cut down the middle with an axe. The phosphate groups and sugars form the backbone of the ladder, while the nitrogenous bases provide the rungs. There are four different types of nitrogenous bases, and the order of the bases in a polynucleotide is what tells a cell how to make a structural protein, an enzyme or any other number of important components of a healthy, functioning organism.

Miss Crimson: Okay, Professor Pear, let me stop you right there. You've been throwing around a lot of fancy jargon. Before you go any further, let me see if I can summarize for the jury what you've told us so far.

How to Construct Graphs from Data

What Is Wilderness? - Definition, Problems & Preservation