In contrast to American patriotic support during WWII, the Vietnam War sparked a domestic response of protests and draft dodging that reached it's height in the 60s and 70s. Discover the ways this era was marked by the emergence of 'hippies', opposition to the draft, the tragedy of the Kent State massacre, and how this unpopular war impacted the civil rights movement. Updated: 10/15/2021
Create an account

War, Society, and the 'Home Front'

Since the beginning of human history, war has affected societies in major ways. In this lesson, we will be learning about how the Vietnam War impacted American society. But before we dig into that, let's quickly go back in time and highlight some trends regarding war and society. In a lot of cases, war brings about intense feelings of patriotism and nationalism from the public.

Think about World War II. After the United States became involved in the war following the Japanese attack on Pearl Harbor, the American public fully supported the war. People waved flags and had full confidence that the mighty United States would win the war. Patriotism ran high as citizens began carpooling to save gas for the war effort; they also saved scrap metal and purchased war bonds. At every level of society, the American public mobilized to do their part to help defeat the Axis powers. The term 'home front' is often used to describe the civilian population at the time of war.

Basically, the 'home front' can be thought of as society in general. World War II is considered a 'total war' in the sense that the 'home front' was fully mobilized and fully supportive of the war effort. 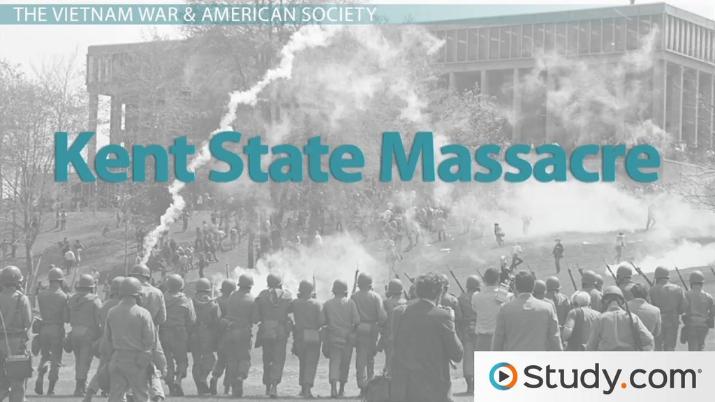 Try it now
Back
Coming up next: The Election of President Nixon

The Vietnam War and American Society

Throughout the 1950s and the early 1960s, the Vietnam War did not have much of an impact on American society. During this time, the United States was only involved in the war in a limited way. But during the mid-1960s to 1975, things heated up and discontentment with the war reached a fever pitch. Widespread protesting first began in 1964 and only escalated as time went by.

Now remember, with the mid-to-late 1960s, we're getting into the 'hippie era.' Many of the anti-war protesters were hippies. Hippies were a loosely-defined group of young adults who challenged traditional values. Many hippies supported drug use, listened to rock and roll, and promoted greater sexual liberation. They were generally anti-war and politically liberal. They often had an unkempt, distinct appearance.

Across the country, hippies organized to protest the war. Many protests were held on college campuses. Sometimes the protests turned violent. The Kent State massacre took place in 1970 when Ohio National Guard troops fired on a crowd of unarmed Kent State University protesters, killing four students. This tragic event shocked the nation and highlighted the domestic turmoil brought about by the war.

Some anti-war protesters were Vietnam veterans. An organization called the Vietnam Veterans Against the War became highly influential and sponsored a host of anti-war demonstrations.

Okay, so by now, maybe you're wondering why all this protesting was happening in the first place. I mean, why were so many young Americans (and Americans of all ages, for that matter) against the Vietnam War? What exactly were they protesting?

Well, to begin with, many Americans felt it was a mistake for the United States to be involved in the Vietnam War. Many Americans did not see the point of being involved in a war halfway around the world. Many liberals felt the war was unjust and motivated by imperialist desires. They reasoned that the events in Vietnam were none of America's business.

Conscription, commonly called the 'draft,' was another major issue. Under the draft, men were basically forced to serve in the military, often for a cause they did not agree with. Many people considered the draft unethical, especially because African-American men were proportionally more likely to get drafted into war than white men. This helped unite the anti-war movement with the civil rights movement. Before he was killed in 1968, civil rights leader Martin Luther King, Jr. was an outspoken opponent of the Vietnam War. To protest the draft, many people burned their draft cards in an act of civil disobedience. 'Draft dodger' became a common term for men who purposely attempted to avoid being drafted into service.

We could go on and on exploring more of the details surrounding the impact of the Vietnam War on American society, but what you need to remember is that the war was very unpopular, especially in the late 1960s and early 1970s. The war led to widespread protesting.

Now let's review our key terms. 'Home front' refers to the civilian population at a time of war. The Vietnam War lasted from the mid-1950s to 1975 and was extremely unpopular. It resulted in widespread protesting. Many of the protesters were hippies. Hippies were a loosely-defined group of young adults during the late 1960s who challenged traditional values.

In 1970, the Kent State massacre took place when National Guard troops shot and killed four student protesters. Finally, 'draft dodger' became a term for men who purposely attempted to avoid being drafted into service. The Vietnam Era, particularly in the late 1960s and early 1970s, was a sad and tumultuous chapter in American history.

The above lesson topics can prepare you to:

Domestic Responses to the War in Vietnam
Related Study Materials