Lynn has a BS and MS in biology and has taught many college biology courses.

Before we can define exactly what a dominant trait is, we must first define and discuss many genetics terms. A gene, or unit of heredity, can have many different versions called alleles.

There are often two kinds of alleles:

Let's use an example in humans to illustrate all these new terms we've learned. Humans have at least two earlobe phenotypes: detached and attached. The dominant allele (E) for determining earlobe type specifies detached earlobes. The recessive allele (e) codes for attached earlobes.

Because individuals must have two alleles for a gene, there are three possible genotypes:

Remember that there are only two possible phenotypes and that dominant alleles hide recessive allele effects. This means that both EE and Ee are seen as detached earlobes, while only ee is seen as attached earlobes.

A recessive trait is the phenotype that is not seen in the heterozygous genotype, and attached earlobes are a recessive trait. This brings us back to our main topic, which we can now define. A dominant trait is the phenotype that is seen when the heterozygous genotype is present. So, detached earlobes are a dominant trait. 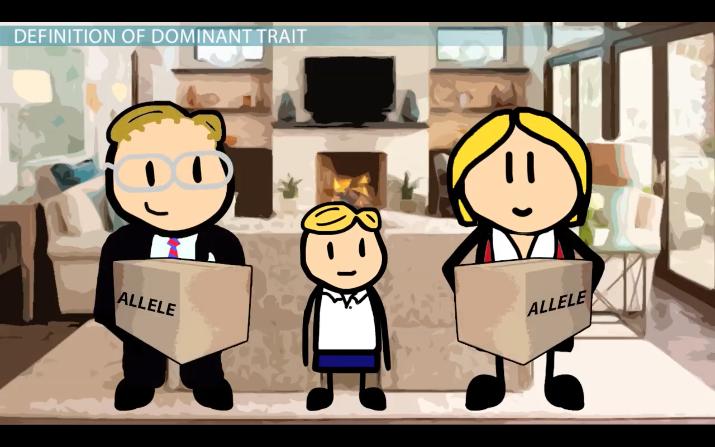 The following lists some common and uncommon traits in humans that appear to follow the rules for being dominant traits:

Here is a similar list of traits for animals:

Dominant traits are those that are expressed or seen when a heterozygous genotype is present. Heterozygous just means having two different alleles for a gene. One is usually dominant while one is recessive. Remember, recessive alleles are masked by dominant alleles. So, if a heterozygous genotype is present, then only the dominant trait will be seen. Dominant traits are also expressed in homozygous dominant individuals. One more thing to remember is that just because a trait is dominant, it does not have to be the common trait.

As you come to the end of the video, you should try to:

Recessive Trait: Examples | What is a Recessive Gene?

Phenotype: Examples | What is a Phenotype?

What is Relative Age? - Definition & Effect

What is Homeostasis? - Lesson for Kids

What are Genotypes? - Definition & Examples

Homozygous: Examples | What Does Homozygous Mean?