Sexuality, women, and gender are prominent themes in ''Dracula'' by Bram Stoker. In this lesson, we will learn more about these themes through an analysis of several quotes.
Create an account

Bram Stoker's Dracula explores themes of sexuality, women, and gender through the development of the male and female characters. In the novel, women are represented as either highly sexual or prudently chaste, which is a direct critique of women during the Victorian era. Moreover, the novel looks at the differences between gender roles through character development. In this lesson, we will look at how sexuality, women, and gender are explored through several important quotes that shape each of these themes. 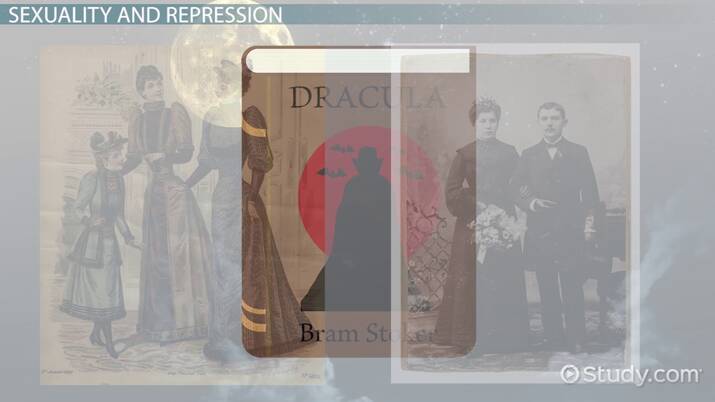 Coming up next: Dracula Quotes About Superstition

In Dracula, Bram Stoker writes characters that come face to face with sexuality--sexual repression is at the core of this theme. Both men and women are sexually repressed, as witnessed by Jonathan Harker's thoughts and actions during his imprisonment at Dracula's castle. His sexual repression is best described in the following quote:

''I was afraid to raise my eyelids, but looked out and saw perfectly under the lashes. The girl went on her knees, and bent over me, simply gloating. There was a deliberate voluptuousness, which was both thrilling and repulsive, and as she arched her neck, she actually licked her lips like an animal…I closed my eyes in a languorous ecstasy and waited--waited with beating heart.''

Jonathan Harker is about to be bitten by Count Dracula's three daughters. The vampire women are voluptuous and highly sexualized; they are free to act on their sexual desires, which is the exact opposite of men and women in Victorian society. The fact that Jonathan must close his eyes demonstrates his inability to handle open sexuality. At the same time, he feels his desire to be ravished by the female vampire bubbling up when he states that he closed his eyes and waited in a dreamy state of ecstasy. He wants the woman to take advantage of him, but he feels shame for that, as he struggles with viewing her sexual expressiveness as both desirable and repulsive.

Women are defined on a continuum in Dracula. Mina is pure and chaste throughout the novel and embodies the ideal Victorian woman. Van Helsing says, ''She is one of God's women, fashioned by His own hand to show us men and other women that there is a heaven…so true, so sweet, so noble, so little an egoist - and that, let me tell you, is much in this age, so skeptical and selfish.''

Mina embodies the ideal woman in all respects. She is prudent, intelligent, caring, understands her place in society. Stoker develops Mina as ideal so he can present what is considered as unacceptable behavior for women through the character development of Dracula's daughters, the 'weird sisters'.

The three women serve as the opposite of Mina: impure, radical and evil. They are everything a Victorian woman isn't supposed to be in society. The women are referred to as 'monsters' by Jonathan. The women seduce men, which the novel is clearly arguing against. A woman must be pursued by men in an appropriate manner and should not seek out a relationship independently.

On the continuum of what defines appropriate female behavior, Lucy falls in the middle. Lucy behaves as a Victorian woman should and shows glints of purity, but at the same time, Lucy's statements hint that she may be more progressive than other women in society. For example, Lucy says, ''Men like women, certainly their wives, to be quite as fair as they are; and women, I am afraid are not always quite as fair as they should be.''

She is acutely aware that women do not fit the expectations of society and may be more aggressive than their male counterparts. Perhaps this is Lucy's way of showing her desire to break free from the rigid patriarchal society of the Victorian era. Later, Lucy transforms into a vampire, which allows her to experience the sexuality that has been so heavily repressed.

Traditional gender roles are explored and exemplified in the novel. Men are treated as stalwart, brave, and heroic, while women are described as motherly and emotional.

For example, when asking Quincy Morris to give blood to Lucy after she has been turned into a vampire, Van Helsing says, ''A brave man's blood is the best thing on this earth when a woman is in trouble.'' A man is supposed to be strong and to protect women in need. Stoker is highlighting a man's role as hero and a woman's role as 'helpless maiden'.

Gender stereotypes are further examined when Van Helsing compliments Mina by saying, ''Ah, that wonderful Madam Mina! She has man's brain - a brain that a man should have were he much gifted - and woman's heart.''

A man is rational in mind and a woman is caring in heart. Van Helsing's statement solidifies that men are viewed as intellectual and resolute, while women are emotional and nurturing. Mina possesses the best of both worlds, but we know that these stereotypes are artifices holding up a society of men and women wishing they could be free to exhibit their identities.

Dracula by Bram Stoker explores the Victorian society and themes of sexuality, women, and gender. Through the development of female characters that are chaste, wild, and somewhere in the middle, the novel argues the women exhibiting less-than-modest behavior are dangerous to men, and thus, to society as a whole.

The novel shows the sexual repression of both men and women, particularly with a focus on the imprisonment of Jonathan Harker.

Likewise, Stoker highlights traditional gender roles by painting men as brave and logical, and women as nurturing and emotional.

How Did Dracula Become a Vampire?

The Castle of Otranto: Summary & Analysis

The Battle of Ap Bac: Causes and Impacts