Drawing conclusions while reading is a large part of understanding the text's whole meaning. Look at examples of how to draw conclusions from text, and read on a few lessons from these pretend situations. Updated: 01/06/2022
Create an account

Let's investigate and see how drawing conclusions can help you when you're reading! 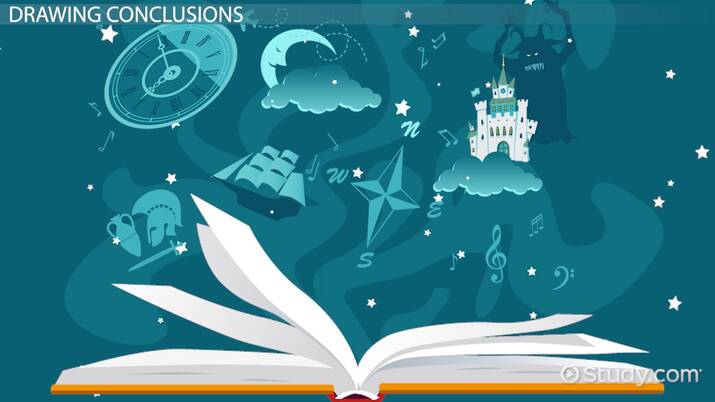 Coming up next: Drawing Evidence from Texts: Lesson for Kids

How to Draw Conclusions

To draw a conclusion about why Detective Donut arrested Terry Tiger, let's examine what a reader could know from reading the text and from his or her knowledge and experiences.

If you combine what you know from the text and your own experiences, you see why Detective Donut arrested Terry the Tiger. Looks like he was caught blue-handed!

After Terry the Tiger was arrested, Detective Donut put him in his police car and drove to the station. Read the next part of the story as Terry describes why he stole the muffins.

Pulling away from the crime scene, Detective Donut noticed that Terry the Tiger was sobbing.

'Upset that you got caught?' asked Donut.

'No. I didn't mean to break the law. I've had nothing to eat for two days because my refrigerator is broken. I was so hungry that I ate the muffins before I even realized what I was doing,' replied Terry.

Detective Donut thought about not eating for two days and got tears in his eyes as he drove toward the station.

What can you conclude about how Detective Donut felt after hearing Terry's story?

You could conclude that Detective Donut felt sad for Terry Tiger by examining the text and your own personal knowledge and experiences:

Looking at the clues from the text with what we know about our own feelings, we can conclude that the detective felt bad for Terry Tiger.

All right, let's take a moment to review what we've learned. In this lesson, we learned that drawing conclusions is an important skill to figure out information that isn't directly found in the text. You can draw conclusions to figure out why events happen as well as how a character feels. When you draw conclusions, you should think about what you've read, what you already know about the topic, and your own experiences.

How to Interpret Generalizations of a Passage

Describing Cause & Effect Relationships in a Text: Lesson for Kids

Reading Selection Text Clues & Conclusions | How to Draw a Conclusion

How to Draw Conclusions from a Passage

Sequence of Events: Lesson for Kids

How to Balance Addition Equations

Loyalists vs. Patriots of the American Revolution: Lesson for Kids

Literacy Instruction in the Elementary School