An isomer of organic molecules are those that have the same technical chemical formula, but are arranged differently. Use practice problems that explore the variation in structure and spatial arrangement between isomers. Updated: 11/18/2021
Create an account

Isomers: The Same, but Different

Have you ever tried to learn a new language? A large part of that process comes down to following basic rules and memorization, right? You definitely have to memorize vocabulary, but a lot of what you learn is based on a defined grammatical structure and organization.

Organic chemistry is no different! While it may not be as common as speaking French or Spanish, the process of learning how to 'speak' organic chemistry is remarkably similar. There are new vocab terms to memorize, as well as rules to follow when naming and describing organic compounds.

And in this lesson we're going to do just that—learn how to describe some organic compounds. But, these compounds are especially cool because they are isomers, and isomers are molecules that have the same chemical formula but have different arrangements of their atoms.

To be very clear, this is not the same as identifying one thing by different names, as we often do in many languages. Head, noggin, cranium, and dome are all words used to describe your head, but your head doesn't change when you switch terms, just the name of it does. Isomers are more like your right and left hands. Each is a hand, and they both look very similar. But one is oriented to the right and one is oriented to the left. The same, but different. Make sense? 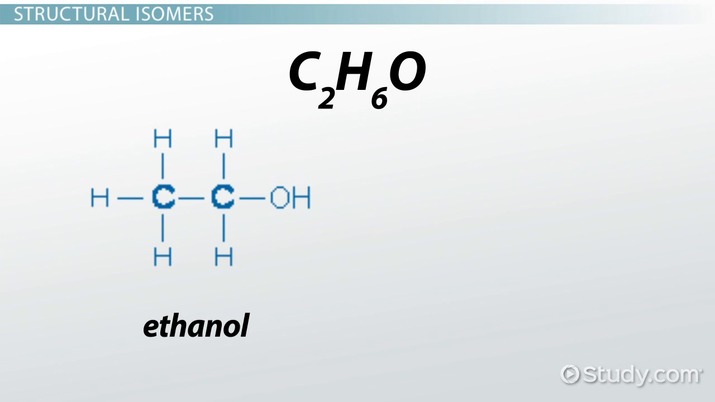 Coming up next: Functional Groups in Organic Molecules

There are many different types of isomers that fall into two main categories, the first of which is called structural (also known as conformational). These are organic compounds that have the same formula but different structures. Think of this as the difference between Coke and Pepsi. But look, both LOOK brown and fizzy, and are quite refreshing! But somewhere deep inside they are different, and because of this, they get different names. Structural isomers are kind of like this because their chemical formulas look the same (they contain the same number of atoms), but their names are different because they have different structures. And, there are three different kinds of structural isomers to be familiar with.

Next are positional isomers, which are when functional groups are positioned differently on the compound. So now instead of rearranging our chain, we are rearranging the position of a functional group present on that chain. Take for example butanol (C4H10O), which is similar to our old friend butane, but now we have added an -OH where once was just an -H. We can move that -OH around on the molecule, which gives us isomers with new names. In one location, the molecule would be 1-butanol. But shift that -OH to another carbon atpm, and we get 2-butanol. And, all we did was change that functional group's position on the molecule!

The second category of isomers are the stereo isomers. These are molecules that have different spatial arrangements. This might sound similar to what we just covered, but hang tight, and you'll see why these are a bit different. 'Stereo' means 'three-dimensional,' so here we're talking about differences in space, not structure like before.

There are two different types of stereo isomers. The first are optical isomers, which are molecules that have the same formula and structure but are mirror images of each other. These guys come in pairs, and no matter how hard you try you can't get one to be the other. These are like your right and left hands; one looks just like the other except that is has an opposite orientation. Optical isomers work the same way. The different forms of optical isomers are called enantiomers, and the central carbon atom that holds this molecule together is referred to as being asymmetrical.

The second type of stereo isomers are geometric isomers, also called cis-trans or E-Z isomers, the details of which we won't go into here. These are different versions of molecules that have carbon-carbon double bonds that restrict rotation. I want you to try something. Put your two index fingers together, and rotate your left hand one way and your right hand the other. Easy peasy, right? Now, put both your index and middle fingers together, and try to rotate your hands in opposite directions again (without switching fingers!). Doesn't quite work, does it? Double bonds in geometric isomers offer the same limitation on molecule rotation.

This can be tricky, but think of it like that experiment I had you do with your hands. Say for example that we have a molecule that has a single bond between two carbons, so the molecule 'ends' can rotate freely. Twist up, twist down, it's the same molecule. BUT, if we throw a double bond in there that restricts rotation, the molecule can no longer rotate. Instead, we would have to literally break this thing apart to move the atoms on the end around, making isomers that are different from each other as opposed to just twisting the molecule with a single bond (which does not form isomers).

You may not have learned the 'language of love' today, but what you did learn is just as valuable! That's because a big part of organic chemistry is knowing how to name and describe organic molecules, including isomers. These are molecules that have the same chemical formula but have different arrangements of their atoms.

Stereo isomers, which are spatially or 3-dimensionally modified isomers, come in two types: optical and geometric. Optical isomers are mirror images of each other. Like your hands they come in pairs, but they can't ever be the same. Geometric isomers usually involve a double bond between carbons that prevents rotation of the molecule. So instead of just turning one end up, down, left, or right, you would have to actually break the molecule apart to get it to look different, making it isomeric.

Alkali Metals Utilization & Properties | What are Group 1A Elements?

Butene Formula & Structure | What are the Isomers of Butene?

What is an Isomer? | Types & Examples

The Differences Between Voltaic & Electrolytic Cells

Methyl Group Structure, Formula & Properties | What is a Methyl Group?