What is Dream Analysis?

Chances are you've had a dream in which you were falling - it's one of the most commonly reported dreams. Have you ever wondered what it means? Many believe a falling dream signifies that something in your life is on the wrong track, such as a career or a marriage, and needs changing. Some psychologists dedicate their careers to the process of evaluating dreams to determine their meanings. This is called dream analysis.

The first recorded examples of dream analysis date back to ancient Egypt. Ancient Egyptian dream interpreters believed the gods communicated through dreams, and they even produced a book compiling more than 200 of the gods' messages. It's no surprise humanity has been trying to understand these puzzling visions since we gained the mental capacity to do so, but the greatest advancements in dream analysis came in the 20th century, when psychoanalysts Sigmund Freud and Carl Jung developed scientific theories of the discipline. 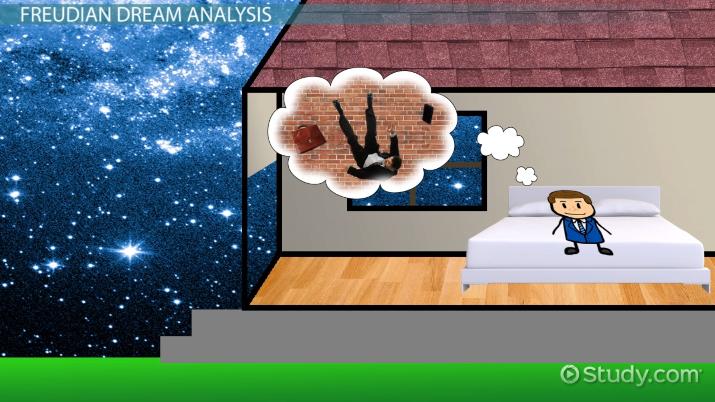 Coming up next: What is Consciousness? - Definition & Explanation

Freud's theory on dream analysis, which he published in The Interpretation of Dreams in 1900, states that your unconscious stores your repressed desires and expresses those desires through the dreams and your conscious mind is then protected from disturbing thoughts and urges. Additionally, he believed that the motivations for your dreams often came from day residue, or your experiences from the preceding day.

Freud's theory relies heavily on symbolism. He thought that the manifest content of your dream (what you remember) isn't the same as the issue it represents; rather, the latent content , or the underlying cause of your dream, must be deciphered. For example, Freud believed that a falling dream signified that a person is about to give into sexual urges in real life.

It's worth noting that, to Freud, most dreams' latent content was sexual in nature. Some examples of symbolism according to Freudian dream analysis are phallic symbols (guns, snakes, neckties and other objects that are longer than they are wide), vaginal symbols (doors, tunnels, windows and other types of openings), and sexual acts (climbing or descending stairs or steep inclines).

Additionally, Jung believed that the unconscious is comprised of two parts: one belongs solely to the person, the individual, while the other is collective - it belongs to all of humanity and contains universal symbols. Any given dream can take from both the individual unconscious and collective unconscious. Note that Jungian dream analysis does not rely on interpreting symbols, but rather the archetypes of dreams. Some of the common archetypes in Jungian dream analysis are:

While Freud and Jung applied scientific principles in developing their theories of dream analysis, it's still often considered a pseudoscience. A pseudoscience is a collection of beliefs or theories that is presented as science but not formulated in a scientific manner. The arguments for this include the fact that dream analysis (and its mother discipline psychoanalysis) is not easily testable or measurable, because it relies on subjective views of the human subconscious. Others, too, have claimed that Freud's theory on dream analysis is merely an attempt to insert sexual symbolism into dreams. But this hasn't stopped people from trying to interpret dreams and, today, dream analysis is practiced by professionals and laymen alike. There have been a variety of books published that teach you to interpret dreams.

Today dream analysis is often considered a pseudoscience due to the difficulty in measuring and testing theories. However, the idea of analyzing dreams still captivates the interest of individuals as it did long ago for the ancient Egyptians.

Freud's Dream Theory & Analysis | What is the Psychoanalytic Theory of Dreams?

Studying the Unconscious in Personality Psychology

Why Do We Sleep and Dream?