Dred Scott was a slave who tried to gain his family's freedom by filing a lawsuit that went to the U.S. Supreme Court. Come learn about the case, the Court's decision and some interesting facts about Dred Scott's life. Updated: 02/28/2020
Create an account

Imagine the things you own, like your video games and bike. There was a time in the U.S. when African Americans were slaves and thought of as property, like that bike. Slavery was legal in many states and territories, though some didn't allow it. Dred Scott was a slave who made history by trying to win his family's freedom in court.

Dred Scott was born around 1799 and moved west with his first master, Peter Blow. When Blow died, Dr. John Emerson, an army doctor, bought him. Scott lived in both Illinois and Wisconsin as Dr. Emerson's slave even though those states didn't allow slavery.

Scott married another slave and they moved with Emerson and his wife back to states where slavery was allowed. Later, when Dr. Emerson died, his wife, Eliza Sanford, owned Scott and his family. Scott offered Eliza Sanford $300 to buy his family's freedom. When she said no, he decided to try another way. 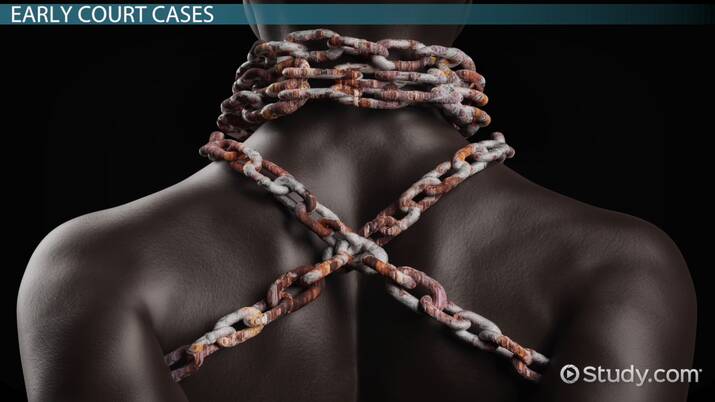 In order to gain his freedom, Dred Scott filed a lawsuit in Missouri, where he and Sanford lived. He stated that because he and his family had previously lived in free states where slavery was illegal, they should be free. It took a total of ten years, during which the case was heard by four different courts, before it finally reached the U.S. Supreme Court.

Scott lost the initial lawsuit on a technicality, or a small detail having nothing to do with the actual case itself. As a result, he was granted a retrial and the court decided that Scott and his family were free. John Sanford appealed, or asked the court's decision to be reversed; the Missouri Supreme Court sided with Sanford.

Although the Scott's were once again considered slaves, Scott did not quit. He took his case from the state to the federal courts. Unfortunately, that U.S. Circuit Court agreed with the Missouri court. So, Scott headed to the United States Supreme Court, the highest court in the nation.

In Scott v. Sandford, Sanford's name was misspelled with an extra 'd' in this famous Supreme Court case. The Supreme Court decided that because Scott was of African ancestry, he was not a U.S. citizen and, therefore, did not have the right to file a lawsuit.

The Supreme Court went even further and said that the Missouri Compromise of 1820, which Congress had passed and which prohibited slavery in some territories, was unconstitutional. The Court stated that slavery could not be outlawed anywhere in the U.S. because slaves were property and the 5th Amendment of the U.S. Constitution protected property rights. According to the Supreme Court, Dred Scott was a slave, and slavery was legal everywhere in the U.S.

While Southerners were happy about the court's decision, Northerners were not. It was one issue that eventually led to the Civil War.

Dred Scott and his family eventually gained their freedom. Scott was still friends with his first master's son, who bought Scott's family and set them free. Unfortunately, Scott died just nine months after gaining his freedom.

Let's review. Dred Scott was a slave who first tried to buy his family's freedom from his dead master's wife and then sued to obtain it. He argued that because he and his family had lived in states where slavery was illegal, they should be free. While the first court that heard the case declared Scott and his family free, the decision was appealed and the ruling was reversed.

However, Scott did not give up. Scott v. Sandford was ultimately heard by the United States Supreme Court (the highest court in the nation), which decided that individuals of African ancestry were not U.S. citizens and, therefore, could not file a lawsuit. Scott and his family were eventually bought and set free by his first master's son.

Great Seal of the United States Facts: Lesson for Kids