Duke Ellington was a renowned bandleader and composer recognized as one of the greatest jazz musicians in American history. Learn about Duke Ellington's music, piano, and big band. Explore his style and legacy to learn why he is regarded as the Duke of Jazz. Updated: 10/10/2021
Create an account

The Duke of Jazz

Hey, hush up, show some respect! After all, you're in the presence of royalty. Jazz royalty. See this room? Yeah, it looks like a concert hall, but really, you are in the royal court of the Duke of Jazz himself. Edward Kennedy Ellington, most often referred to as 'Duke' Ellington, was a 20th-century pianist, composer, and bandleader who fundamentally changed the history of American jazz music. Okay, take a knee. Here he comes. Now announcing his royal presence: Duke Ellington. 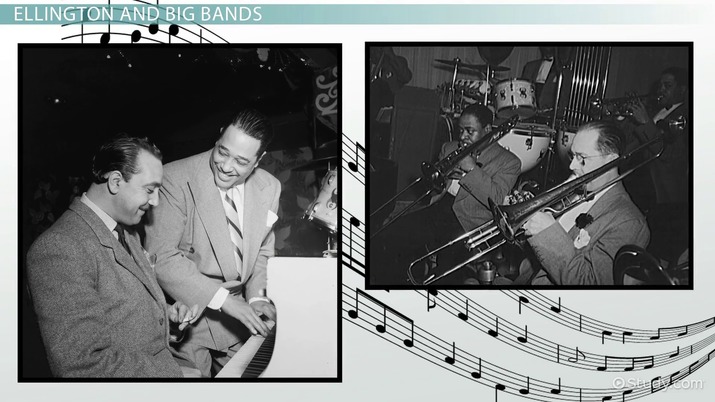 Duke the Pianist and Musician

Duke Ellington was born in 1899. He started taking piano lessons at age seven, although he learned to play by ear and could not read or write music. That didn't stop him from composing his own pieces, his first being the 'Soda Fountain Rag', which he wrote when he was 15. Ellington soon established himself as a talented pianist. His main interest was in ragtime music, a lively dance music noted for offbeat rhythms and one of the precursors of modern jazz music. Ellington and a small band played across Washington, DC, then eventually moved to New York City's Harlem neighborhood. And this is where things really took off.

Harlem in the 1920s was entering into the Harlem Renaissance, an explosion of artistic production, maintained by African-American intellectuals and creative geniuses. With Ellington on piano, and sometimes the bugle, his little band grew in size and popularity. By 1923, they were playing at Harlem's most prestigious clubs and started producing records. From there, their fame had nowhere to go but up.

Despite his great talent for piano, Duke Ellington never felt like that was his true calling. Nor is it actually what he is most remembered for. Duke Ellington's fame and place in history is actually mostly due to his role in developing the era of big bands: large orchestras that played jazz music, most notably swing. Before this, most African-American jazz bands were smaller, and they mostly played in small African-American clubs. As Duke Ellington developed his musical tastes, he gathered more and more musicians, and eventually formed them into a large orchestra, called a 'big band.' This 11-piece orchestra played at the exclusive Cotton Club in Harlem and was one of the few groups in jazz history to maintain popularity with both white and black audiences at a time when segregation was still a way of life.

Duke Ellington's orchestras are some of the most respected in the history of jazz, especially in the style of big band swing, a popular kind of dance music. Besides being a charismatic figure and a talented bandleader himself, Ellington was able to attract some extremely gifted musicians. In fact, many of the most highly regarded jazz musicians of the time were members of Ellington's orchestra. And Duke realized it. Rather than letting such skills go to waste, he often composed songs specifically targeted to highlight the talent of individual performers. For example, the song, 'Jeep's Blues' was written to highlight saxophonist Johnny Hodges, who is remembered as one of the most skilled sax players in history.

Oh, did I not mention earlier that Ellington composed most of the music that his orchestra played? Well, he did. In fact, by the time of his death in 1974, Duke Ellington had composed over 1,000 original pieces of music. To this day, he is one of the most prolific composers in history and has personally contributed more to jazz music than any other single individual. His compositions were also pretty groundbreaking for jazz, because they were often written specifically for the purpose of being recorded and played on the radio. This means that Ellington mastered the 3-minute song, because the leading recording format at the time only held about three minutes of music on each side of the record. Ellington's songs were broadcast across the nation, which helped make jazz, particularly big band music, much more popular.

But where did Ellington see himself in terms of jazz legacy? Actually, not part of it at all. Duke Ellington never liked the term 'jazz' for his music, because he felt it was too confining. He preferred to simply categorize it as American music. Of course, we call it jazz now, but however you label it, Duke Ellington's compositions are part of American history and culture in a way that can't be forgotten. So, long live the Duke, and long live jazz.

Edward Kennedy 'Duke' Ellington was an American pianist, bandleader, and composer of the 20th century, most often known for his work with big band swing music. Ellington was a talented pianist, but his fame comes from his big bands: orchestra-sized jazz bands that played lively dance music. As an African-American composer working in Harlem, Ellington is remembered as an important part of the Harlem Renaissance, a period of immense artistic and intellectual production in Harlem. His bands attracted some of the greatest jazz players in history, and Ellington wrote music to highlight their talents.

Over his life, Duke Ellington wrote over 1,000 songs and helped make jazz music a national, and even international craze with his recordings. However, he considered his music to be too broad for the strict label of jazz, and preferred to simply call it American music. And, in fact, Ellington's compositions and recordings helped establish jazz as one of America's definitive styles. So, while he was called the Duke, Ellington may just be the king of American music.

Finishing this lesson on Duke Ellington could lead to your ability to: