Dura-Europos is an ancient Syrian city buried by the Persians when they defeated the Romans occupying the city. Explore the Dura-Europos synagogue, a surprising feature of the city, and discover its architecture, artwork, and preservation. Updated: 01/21/2022
Create an account

In the 1930s, archaeologists working in Syria made a startling discovery. Under mounds of earth were buildings, beautifully preserved buildings that had survived the ravages of time. Sometimes called the Pompeii of the East, this was the city of Dura-Europos.

Dura-Europos was an ancient city on the Euphrates River. Originally called Europos and recognized as a gateway between East and West, it became known as Dura over time, which means fort. The fort was originally held by the Parthians, but captured by the Romans and incorporated into their empire around 165 CE. So, it's a fascinating find, but nothing sparked more fascination than the discovery of an ancient Jewish synagogue at the site. Recognized as one of the oldest synagogues in the world, it's an incredible glimpse into Jewish life on the outskirts of the Roman Empire. 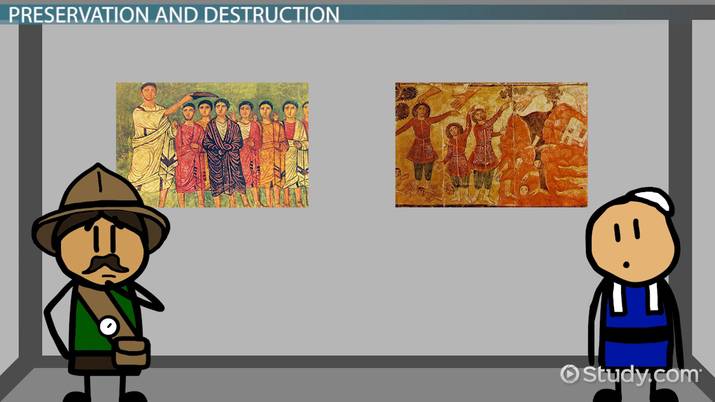 Try it now
Back
Coming up next: Early Christian Catacombs: Organization, Function & Ornamentation

Architecture of the Synagogue

Traditionally, the Jewish population lived around Jerusalem and worshiped at the Temple there. However, the Romans destroyed the Temple of Jerusalem in 70 CE, and the Jewish people were largely scattered. From this point on, their houses of worship were known as synagogues. This is what was found in Dura-Europos.

So, what did it look like? It was a basic cube-shaped structure, with high walls and a flat ceiling. If that sounds a little underwhelming to you, don't worry, you're not alone. The synagogue of Dura-Europos was not built as a synagogue; it was built as a modest house.

We have to remember that Judaism was a strongly persecuted religion in the Roman Empire (as was Christianity, which the Romans treated as a sect of Judaism) so many Jews in Roman towns were underground. That seems to be the case here, and we've got several architectural clues to suggest that. For one, it's pretty clear that this was once a house, which was remodeled around 245 CE in order to create more interior space and rooms for worship. Secondly, the synagogue was found just inside the western wall of the city, which was the poorest neighborhood and a good place to hide the clandestine meetings of a marginalized people. In fact, the building next door seems to have been a Christian house of worship. Finally, the synagogue does not follow the strict rules set out by Jewish architectural law, which Jews took very seriously. This indicates that the synagogue was not really here by choice, but more as a matter of necessity.

Artwork of the Synagogue

The presence of the synagogue in Dura-Europos is fascinating enough, giving us a rare chance to see what life was like for Jews in Roman Syria, but this building actually has even more to offer. Remarkably preserved, its walls were found with original frescoes still intact.

This is unusual, and not just because the paintings survived. Traditionally, Jews of this time did not decorate their synagogues with frescoes, largely because representational artwork (and particularly painting) was highly taboo. Yet here in Dura-Europos was a temple with interior walls covered in murals of Biblical scenes, depicting Biblical figures. This is baffling to many archaeologists, who generally interpret it as a sign that the Jews in this city had been highly acculturated to Roman norms and artistic tastes.

So, what did they paint? Many of the frescoes depict common scenes from the Jewish Torah, such as the story of Jacob (progenitor of Israel) and his children. However, some are also a little unusual. For example, some historians have noted that there is a militaristic nature to many of the paintings. Not only might this reference the belief that the Jewish Messiah would lead a rebellion against the Romans, but could also indicate that members of the Jewish congregation actually served in the Roman military. There's also an intriguing appearance of Orpheus in one of the paintings. Orpheus was not Hebrew. Orpheus was a figure from Greek mythology, here being conflated with the Hebrew hero David. Again, this shows a high degree of acculturation with Greco-Roman societies, and overall just paints a really interesting picture of Jewish life under Roman occupation.

So, how is it that we're able to actually see all of these frescoes? Why was the Dura-Europos synagogue so well preserved? Ironically, it's because of war. Persians invaded the city around 256 CE, and in response the Romans thickened the defensive walls, an act which may have resulted in some outlying buildings being filled with dirt and covered with sand. Regardless, the city fell in 257 CE, the residents were expelled, and the entire city was buried by the conquerors. However, this act is what preserved Dura-Europos, protecting it from the elements within the dry, Syrian sand.

It wasn't until about 1932 that Dura-Europos was rediscovered. When the synagogue was first found, archaeologists thought it was a Greek or Roman temple due to the frescoes. Upon realizing what it was, however, they took great care to study, excavate, and remove it, placing nearly everything of value in museums. This turned out to be fortunate, as this region was captured by the terrorist organization ISIS (or ISIL) in the Syrian Civil War, and the remains of Dura-Europos were completely destroyed. After surviving countless wars, the fort fell for the last time, but the treasures of its incredible synagogue survive, just as they have for millennia.

Along the Euphrates River of Syria was once a fort and city known as Dura-Europos. The Romans occupied it in the 2nd century CE, but archaeologists learned that the city hosted a clandestine Jewish population based on the discovery of a synagogue. Built inside a home on the outskirts of town, the synagogue is unique for its representational frescoes, an art form generally taboo among Jews of the time. It's a sign of acculturation and survival as a marginalized people and gives us a remarkable glimpse into their lives.